A rocky journey can be a good one

I feel like I’ve been here forever already, even though it’s less than two weeks. I wake up rested, stretching out and making the most of having a bed to myself, then go outside and say hello to the day. I work in the kitchen with the doors open, looking out at the view. I go outside again to peel a juicy orange (from the two and a half kilos I bought from the farm), looking down beyond the honey factory and the green trees towards the deep blue bay, and watch an ant meander over hopefully.  A couple of them valiantly staggered under the weight of a scrap of peel yesterday. 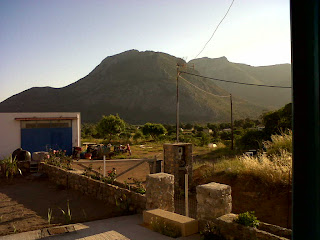 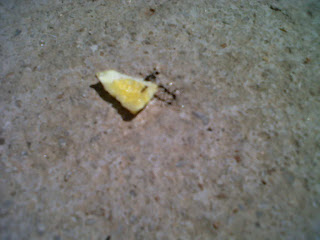 This morning, as I was sitting at the kitchen table that doubles as a desk, there was an earth tremor. I’ve never felt one before. At first it felt like a very heavy vehicle was driving up the track, but that seemed less likely than an earthquake. I know we get them here. The house rocked gently for about thirty seconds. It was rather exciting.
Today is Mother’s Day around the world except for in England, but today is also another special day, said Dimitris today on the beach. It’s two years since I met him.
When I first met Dimitris, he was undressing. I was reading my book and looking at the sunset, sitting in a wooden fishing boat on the beach in Livadia that had been converted into seats for a beach bar. He had just emerged from the sea and was pulling off his hood, mask, wetsuit, flippers and various other paraphernalia he uses for fishing. We chatted for a while and then I said ‘See you again.’ ‘It is not difficult in Tilos,’ he said.
Soon we became good friends. Since then, he’s shown me all around Tilos taught me so much, and he’s been to visit in England, and entertained my boyfriend too when I brought him over last year. Now I’m on my own again and it’s very good to have his company. Plus, he knows where's best to go swimming on any given day. Yesterday, although it was very windy, we went to the iron-red cliffs at the southern end of Eristos and it was fine. 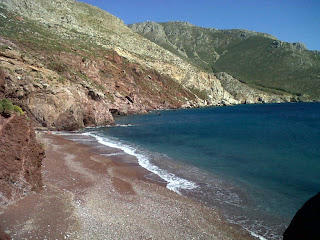 Today we drove down to Eristos and then walked over the northern headland to Ayios Petros. Going to see St Peter also means you’re going to die, in Greek as in English. And many pieces of plastic, skoupithia, wash up from the Mediterranean and come to die on this particular beach for some reason, which is why the people who live in the only house nearby say they are going elsewhere for their swim when we passed them; although I think it’s more likely because you can’t drive there, you have to walk.
High up above the huge bay, they have one of the best views on the island, as did the people who lived in the abandoned buildings just below them. They don’t look like ordinary houses, too functional, and Dimitris sees me looking at them. ‘A small Spinalonga,’ says Dimitris. A leper colony, from before the war. 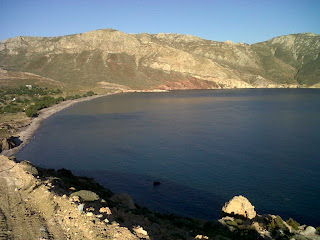 My view is then distracted by a pair of falcons circling high above, and the pink flowers of the pikodafni or oleanders that grow in the dry river bed, and the strong fragrance of herbs around here. Faskomilo or sage, thymi. Tilos was famous for its perfumes in ancient times.
We surprise a few lovely long-haired goats, who stand haughtily on a dry stone wall for a few minutes, looking at us, then scamper off down the slopes. We follow their stony tracks that wind down to the water, which is a deep, deep blue today, reflecting a cloudless blue sky, and calmer than it’s been for days. The plastic tends to wash into one end of the beach, along with heaps of driftwood: all those plastic bottles and buckets, it’s so sad. Dimitris also points out a pen-shaped object filled with liquid: it’s a chemical, used to find fishing nets in the dark. ‘It’s a problem.’
But at our end of the beach is a little piece of heaven, empty and beautiful. I’m in the water almost immediately. Dimitris takes a while longer to put on all his gear. He catches up with me and points out a small sandy-coloured flat fish, good for eating apparently. I watch the fish for a while: hundreds of some of my favourites, little blackish ones with forked tails, which I learn are called ‘small monks’ because of their colour. And a couple of the electric blue and orange ones, and the melanouri. But I mostly swim along just watching the shapes of the waves in the sand going on and on. Then take off my mask and look up at the sloping hills, still so green and yellow with gorse in this season. Close to the beach is a little stone chapel. You can imagine arriving here on a little boat and feeling safe because of that church, even if you were going to see St Peter.
While I’m drying off and warming up in the sun, Dimitris tells me about it being two years since we met. So much has happened since then. It was when I came here to stay for a month, part work and part holiday, after an emotionally difficult winter back in England, a winter of heartbreaks. I came here and knew that this little island could always make me happy. Since then it has always been a refuge in my mind. It’s also been a temptation: knowing I could work from here, I kept wondering – why not? Why wait? I have this habit of thinking: if you knew you only had a year to live, how would you live it? So I worked hard at my job and hoped they’d let me bring some of it with me here. And here I am, feeling very lucky. Tomorrow, I’ll be at my desk for eight hours, doing work that I love. In a place that I love. 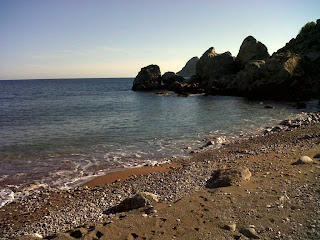 I fall asleep with the sun on my back for a while. When I wake up, I feel like going for another swim.  No wetsuit or mask this time, just plunging in gleefully, diving down and seeing the blue from underwater, feeling the life and energy of the sea. After, as always, Dimitris cuts up some apples for us to share.
Walking back from the beach, he picks me some faskomilo to make into tea. Apparently it’s good for the kidneys and lowers the blood pressure. I’m not sure that’s what I need exactly but I love the smell of it. We walk back, past the old threshing floor, past the falcons. I remember one time when we walked this way two years ago, I said wistfully how great it would be to live here; he brushed off the notion, saying it’s very difficult to make a living here. He’d met a woman who used to be a scientist in Chernobyl, now cleaning rooms during the summer season. But I persisted with my ridiculous notion of coming here anyway. That’s one of the reasons he likes me: my spirit, he calls it, optimism and energy perhaps.
By the time we get back to the car, the rays of sunlight are spilling over the top of the mountain that’s now in shadow. Dimitris has brought me a jar of octopus he caught and prepared in vinaigrette for me, knowing how I love it. My shoulders ache a little from the swimming and my skin is salty. It’s a good day. 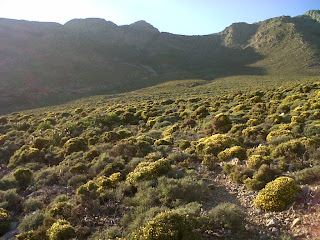 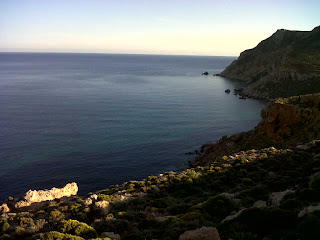 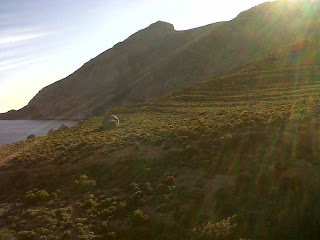 Email ThisBlogThis!Share to TwitterShare to FacebookShare to Pinterest
Labels: beach