It’s still dark and I can hear Stelios on the phone to Nikos as they arrange where they’re meeting for fishing.
‘No, I can’t take the car, Jennifer needs it…’
I’m puzzled (do I need the car?) and mumble from bed, ‘I don’t need the car…’
A few minutes later he’s upstairs.
‘Moraki mou, could you do me a little favour…?’ And I learn why I need the car.
Which is why I was driving to the post office in Livadia just after eight yesterday morning, and saw the centre of the island looking breathtakingly beautiful. The early ygrasia, the moisture in the air, had coated the grass and turned it all silvery-white in the sunshine, and the trees darker than usual so their reddish-brown autumn leaves glistened.
When I arrived, the post office man was standing out in the square watching the junior school kids gathering for a school outing (Yeia sas Kyria Jennifer!!). Surprise surprise, there was no queue to get Stelios’ money transfer done.
So I walked down to the rocks, where the water was glassy calm, and went for a swim as far as the rock stack, where I got close to a cormorant. The water was clear enough to see the fish down below, and the only sound was a fishing boat chugging across the bay. A few guys were fishing off the quay, and the morning light was still hazy. Fabulous. 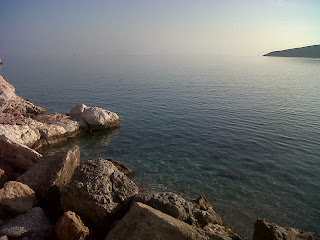 Stelios and I have been celebrating this week – my birthday, and his name-day or yorti, which is more important than a birthday in Greece.
‘Don’t you have a name day?’ asked Stelios.
‘No, we don’t do that,’ I said. ‘I don’t think there is a Saint Jennifer anyway.’
Eleftheria explained to me it’s easier to remember someone’s saint’s day than their birthday, and I suddenly realised what a good idea it is after all.
Life on Tilos takes away any commercialisation of birthdays too. I quickly ruled out the idea of finding him a gift in any of the shops here, and since I’d bought him a book last week on the ferry back from Rhodes anyway, I made him chocolate brownies instead. They were supposed to be chocolate lava cakes but the measurements were a bit tricky.
He said it would be similarly difficult to get anything for me, so he bought some fresh fish from another fisherman, some balades, and even cleaned them ready for cooking (and cleaned the kitchen afterwards!). They’re not the prettiest fish with those huge eyes, which apparently they need for seeing at over 200 metres deep, but they’re tasty. 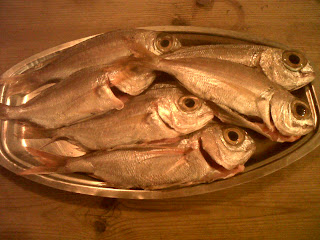 ‘Oh, I forgot, I got this for you when I went to the shop, moraki mou!’ A Kit-Kat emerges from the pocket of the holey fisherman’s pants.
‘How long’s it been there?’ It looked like it had been there a while. But it's always the thought that counts.
Fish, wine, salad, chocolate… we don’t need to go out for dinner. Which is just as well because at this time of year, there's not very much choice in Tilos.
I admit, I had a delightful time in Rhodes last week: being able to go out to cafes like Casa la Femme in the evening and listen to music and the buzz of chatter; being able to pick up a sandwich or have a salad made for me at Eatery whenever I want. I had a massage (too much digging in the field) and went to a yoga class run by a lovely woman I met at the kantina this summer. I even – finally – found time to look around the modern art museum, where I enjoyed the playful portraits of soldiers with moustaches by Theofilos, and the modern icons by Spyros Vasileou, and his lovely painting of ‘Supper on the First Day of Lent 1950’. And then I got talking to the curator, Takis, and he read me his poetry… 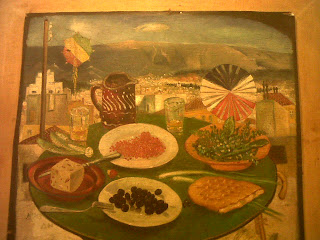 I could have stayed for longer. I came back laden with goodies – a reading lamp, a casserole dish, a tasty cheese covered in black peppercorns, a jar of strange pickled leaves. But of course I was instantly reminded of how magical Tilos is. I drove down to Greek Dance class, had so much fun and when I drove back the hills were bathed in silver moonlight. And wherever I walk, the fields are being readied for planting new crops, people shout hello, and the olives are being harvested (and we have a promise of some fresh olive oil soon!). And when I go for a walk, the startled goats and cats make me laugh out loud. 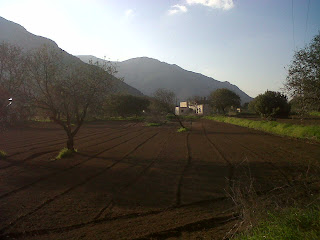 If you ever wondered what noises farm animals (and tractors) make in Greece, you have to see this video 'To Poulaki Tsiou' that’s been doing the rounds over here: http://www.youtube.com/watch?v=RcuY9CtYPKs 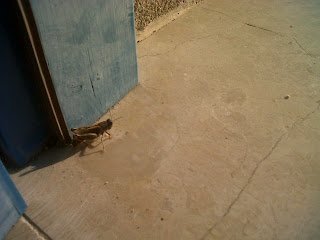 The birds and the bees, all over again. And the crocodiles.

Got chatting to Pavlos today, as I was getting out of the car - he happened to notice that I was getting out of the passenger door even though I'd been driving. The driver door doesn't open any more, see. Well, I reckon that car has done pretty well, considering the rally driving it's subjected to, bumping along that dirt track through dust-clouds and over rocks and ruts... not to mention all the rabbit-killing. Anyway.
We discussed his passion fruit trees for a while, and when he cut one of the fruit open to show me, we got on to the subject of pomegranates. The mice ate all his pomegranates this year, he said. They run up the trees. He said he pulled down a branch to pick some fruit and a mouse ran out. Don't the eagles eat the mice, I asked? But no, said Pavlos, he'd never seen a bird go for a mouse.
Then I asked him where the bees were. Turns out they are all on holiday in Rhodes. This time of year, there's not much for them to eat here in Tilos so they go to Rhodes, for what sounds like an extended gourmet break.
The bees don't worry about mice, but apparently the 'little crocodiles' - a local name for the big lizards or savres - get them. The lizards sit outside the hive and close their eyes - they have a thick skin that's impervious to stinging, so it's only their eyes that are sensitive - and eat the bees as they come out of the hive.
Sometimes I'm so pleased that I'm understanding all this in Greek that I miss the obvious. Was Pavlos having a laugh - was he winding me up? You never can tell with Pavlos. 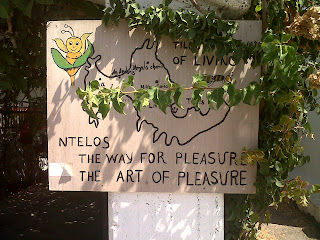 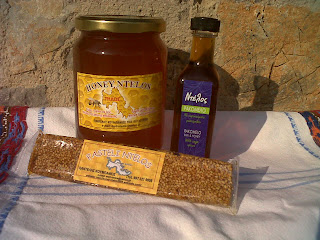 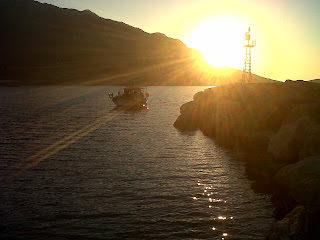 Posted by Jennifer Barclay No comments:

Email ThisBlogThis!Share to TwitterShare to FacebookShare to Pinterest
Labels: honey 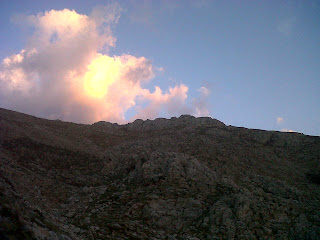 Gradually this year, green signposts have been appearing all over the island, pointing out footpaths. We have one at the end of our road, the way to Skafi; it makes for a better class of landmark than the broken-down cement mixer. 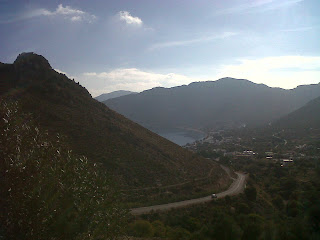 I’ve been all over recently, although some days in the last month it has been too hot for walking. It was hot sunshine the late-October morning I walked to Livadia – a social occasion with everyone waving or stopping to say hello or offer a lift. The bay was mirror-like, cats in the middle of the road, birds twittering, oranges on the trees, flowers everywhere. Someone singing outside the kafeneion and a woman cleaning fish under the little bridge on the seafront, with an audience of cats, while a man cycled over it with his son on the crossbar. 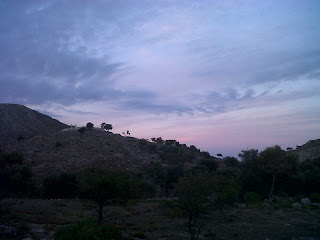 We’ve also had days of rainstorms. But other days it’s been an in-between temperature perfect for walking – maybe a few clouds scudding across the blue sky, or a soft, beautiful, grey day with blue sky peeking through, no need really to carry water or look for shade. Many people who only visit Tilos in the summer don’t get to see the spectacular views from its hilltops.
The eagles circled in slow motion around the cliffs above me and chukar or partridge flew up from the ground as I walked from Ayios Antonis to Megalo Horio; I'd walked to Plaka for a dip, and found the Ikonomou fishing boat there, watched them with the trata nets while I swam.
Anna, Stelios and I walked to Gera from Livadia. Stelios pointed out the plants that were poison – dilitiri, deleterious. We wandered around the abandoned village, the summer retreats of villagers from Mikro Horio before they moved down to Livadia in the 1950s-60s; some of the houses still with roof beams and fireplaces. 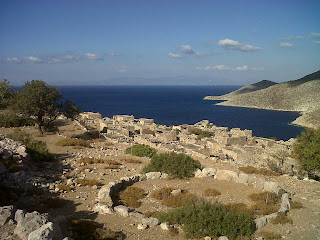 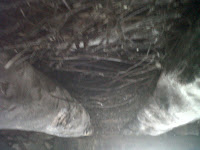 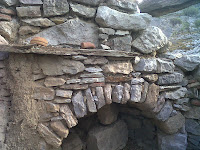 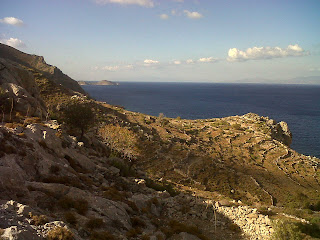 After a hectic day of work on Friday, I wandered to Eristos and then, enjoying blustery yet balmy weather, followed the road over the headland to Ayios Petros, taking a fast dip in the sea which was gleaming silver where it met the grey cliffs dotted with shrubs. The fields where the goats were grazing were brilliant green with new grass.
So Saturday afternoon I went out in the mood for a walk, but not sure where to go; it was very blowy - 7 to 8 Beaufort - and I wasn’t sure if I was energetic enough, after a brilliant evening of traditional dancing at Bozi the night before. But it wasn’t cold, so I headed up the road in jeans and a jumper, then noticed the green sign near the helicopter pad pointing up the path to the Italian house. This is known for being one of the most spectacular peaks on the island. I didn't plan a full assault on the top, but was intrigued to see what the path was like.


It was certainly improved from last time I went up, almost exactly a year ago. There were stones marking the edges of a mostly clear track, and cairns or red spots on the rocks marking the way. I kept going and got into my stride. Once you start, the views just keep getting better and better and it was easy to gain height fast. The view to effort ratio was a persuasive argument to keep going - all of Eristos valley and bay, the village of Megalo Horio and its castle soon far below. 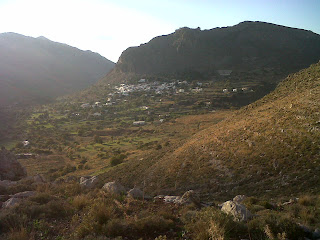 I was amused to find a really helpful information board halfway up the hill in Greek and English. It seemed to encourage walkers to continue up the path, so I did, passing some lovely crocuses. 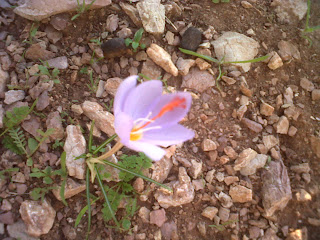 Soon I could see the sea at Ayios Antonis to the north, and the sea at Livadia to the south, with the islands of Nisyros and Halki and Rhodes clear beyond. It was hard to hold the camera straight, it was so windy. 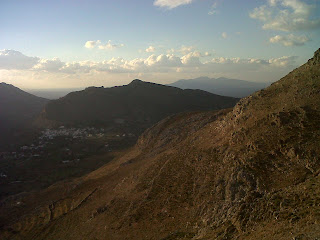 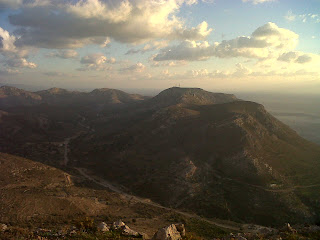 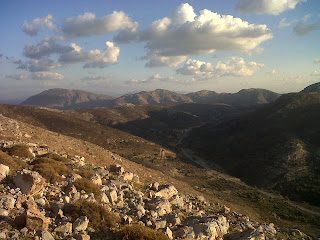 I still had an hour of daylight, I estimated, as I neared the top, tiring a little but hoping the eastern views to Turkey would be just over the next rise – and then I was hit by a gale-force wind. I crouched low to the ground but it wasn’t letting up. I wasn’t going to risk being blown down a cliff just to touch the Italian house. Maybe next time. 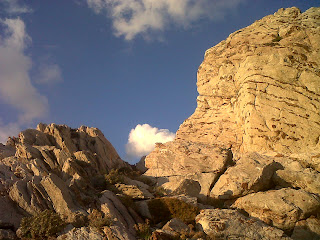 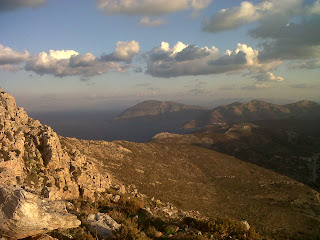 I headed down, jogging down the best bits of the path, watching the sun sinking towards the shoulders of Profitis Ilias, where the monastery is, and the wind whipping up the water in Eristos bay below it. 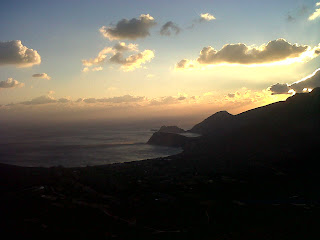 Back at the road. I double-checked the green sign pointing the way I’d just come: it did say ‘Profitis Ilias’ ? Confusing. Anyway, I hurried back, seeing the first lights coming on in the village, and thought about food. 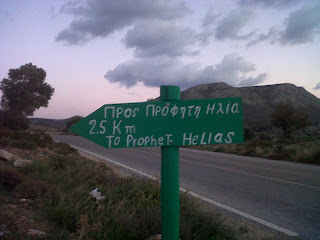