Dogs and Cats and a Tiny Greek Island 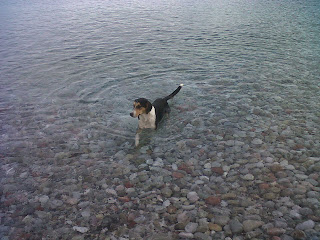 If anyone has a dog EXACTLY like this one that they don't want any more, please could you let me know?

This is the new friend I made on arriving back in Tilos on Sunday lunchtime, after an overnight ferry from Athens. 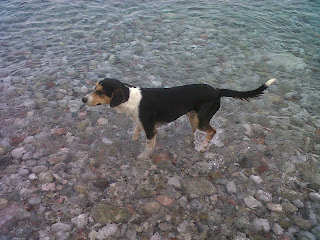 He likes the sea (well, just look at that clear water)... 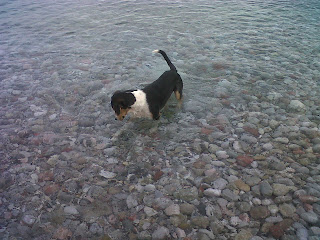 Isn't sure if he likes cats... 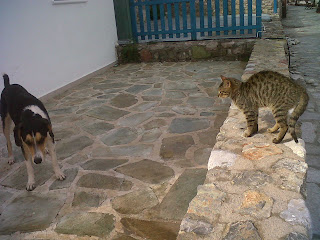 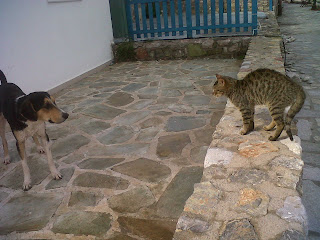 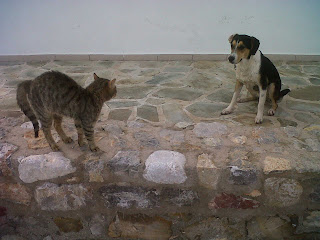 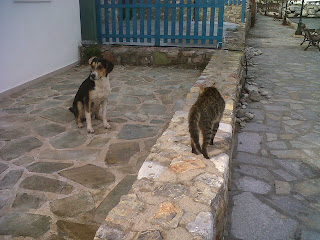 Butter wouldn't melt... This was just before he ran in circles around the cat, which eventually decided to run for it and only just got away... 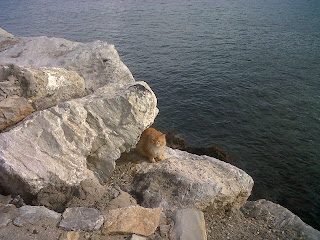 ...staying RIGHT HERE out of reach 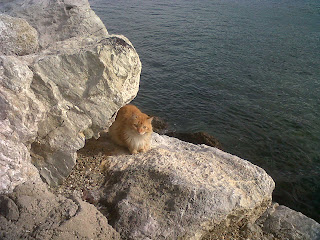 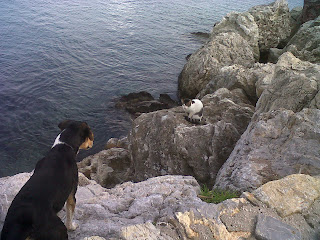 There must be a way down! 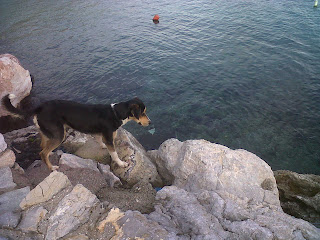 When all the cats have been chased, a stick is the answer. OK, this might not be the biggest stick... 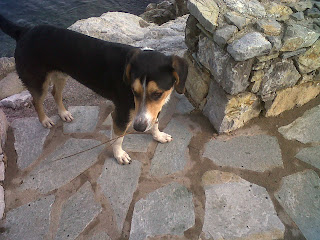 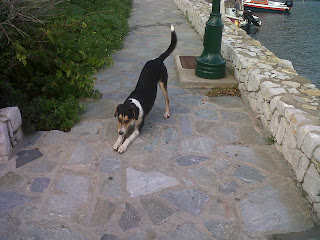 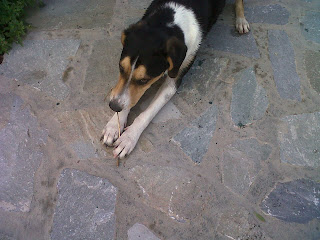 And so I chased a dog around the harbour for a while. Welcome back to Tilos! 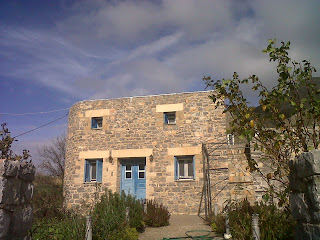 While I was away, people kept asking me, 'Why did you end up in Tilos?' It's a hard question to answer. But on Sunday, arriving back here, it dawned on me that it's simple: it's just the most beautiful place I've ever been.

I recently found To Hellas and Back by Lana Penrose, and have been chuckling my way through the book.

Whereas my upcoming book Falling in Honey is about my dream of living on a Greek island and how I found my way there, Lana's story is what happens when you have absolutely no desire to go to Greece and are dragged to the suburbs of Athens by your partner all the way from Australia. He speaks Greek and she doesn't.

In clever prose she paints a vivid picture of daily struggles with life in a place where the basics are utterly confusing. I've just reached the point in the story where she is beginning to find her feet, and can't wait to see what happens. Check out Lana's work here:
http://lanapenrose.com.au/

In the meantime, I've been reading a very, very different story of a journey through Greece by John Mole, author of It's All Greek to Me! http://www.johnmole.com/

His new book is called The Sultan's Organ, and it's extraordinary: the 1599 diary of young Thomas Hallam, organ-builder, who journeyed by ship from London to Constantinople to accompany a sixteen-foot high jewel-encrusted self-playing organ that was being sent as a gift from Queen Elizabeth to the Sultan of Turkey. John Mole has put the diary into modern English and it's a fascinating true story.

My Greek partner Stelios was intrigued when I started telling him details of their circuitous route -- it takes them weeks just to leave the shores of England because of pirate attacks, the fact that they were at war with Spain, and bad weather -- and wished it was available in Greek too. Hallam gives the first account of a foreigner's overland crossing of mainland Greece, and he has some amusing encounters with the people. It's worth reading for that alone.

The UK edition of my book, Falling in Honey, is due out in March in paperback, and will also be released as an audiobook, which is very exciting. John Mole, as described above, has offered a lovely endorsement for the back cover:

'If you can't escape to an idyllic Greek island, Falling in Honey is the next best thing'
John Mole 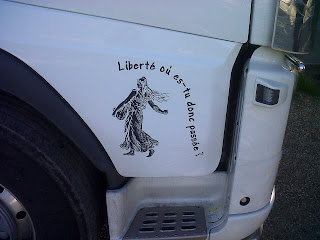 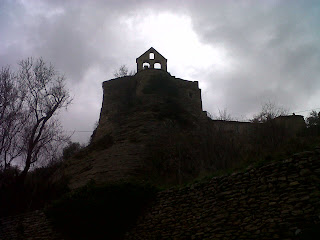 We have now spent almost a week in Provence, where my
head has been getting very confused with trying to translate
French into Greek and vice versa, resulting in a melange of
the two that leaves everyone baffled and me hitting my
forehead in despair. 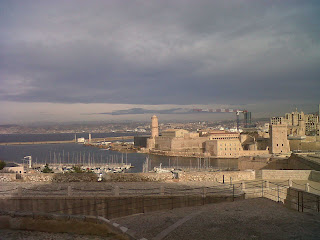 In Marseille (the oldest city in France, founded by the Greeks
2,600 years ago) we ate couscous in a Tunisian restaurant,
ogled fish stalls and African fruits and noticed that bakeries
sell newspapers alongside croissants so that Marseille folk
can arrive for their morning coffee fully equipped. 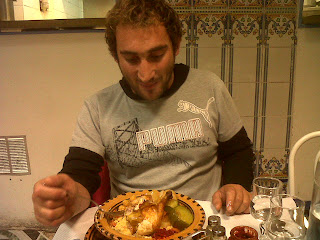 We ate a hot chicken-and-almond filo pie from a North
African market stall, and Tunisian sweets made with thin
pastry and almonds, and listened to North African music in a
bar where most of the guys were drinking coffee rather than
beer and used empty juice bottles as illegal ashtrays. After
coming from England, we felt like we’d almost arrived back
in Greece, in a place where smoking and coffee drinking are
taken seriously, and everyone has jet black hair and wears a
black leather jacket. And in fact, we almost arrived back in
Tilos: we stumbled upon a Greek café called Kalipita and I
dragged Tilos Man inside so he could do the talking for a
while as we drank a glass of his favourite Greek wine,
Nemea, and the video screen showed a cruise from Rhodes
to Symi… 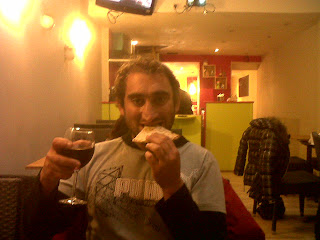 In Isle sur la Sorgue, we ate local olives and tapenade and
honey, ultra-thin pizza with artichoke, fillet of trout, duck
breast and, at Café de France, a risotto made with foie gras
and truffle shavings for lunch on New Year’s Eve,
accompanied by heavenly white wine. But we have learnt
that Tilos Man, while he enjoys all of this, finds that Greek
cuisine is still sufficient to live on. We have also learnt that
according to him, French yoghurt is completely tasteless; I
tried in vain to find, in a whole supermarket aisle of finicky
French fat-free faiselles and fromage blancs, anything that
resembled a thick Greek yoghurt – except, of course, for all
the ones that were actually labelled Greek yoghurt. The
French oranges, which were actually from Spain, were also
tasteless (after eating Tilos oranges straight from the trees
down the road, I’m forced to agree).
We have learnt that many of the trees in Provence are the
same as in Tilos – pefka, elata and kiparissia, olives and oaks
and calamia or bamboo canes. Stelios has spotted tiny
weeds and grasses that Provence also shares with Tilos, such
as radikia, and he stared at a grassy verge for some time
today before asking in confusion where the sparagia or wild
asparagus was – since so many plants are the same, there
should be sparagia. 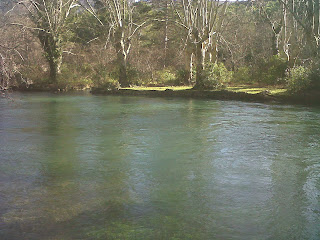 We have walked in the sunshine almost every day, and often
saw the snow on top of Mont Ventoux, against a deep blue
sky; while back in Tilos, according to daily phone calls from
Megalo Horio, the rain it rained every day. Once we walked
along the crystal clear river at Fontaine de Vaucluse, where it
rises from a spring of unknown depths into a still pool below
tall cliffs, before gushing powerfully into white water over
boulders, and eventually calming into a fast-moving river
below the remains of a medieval castle. And there we found
‘the best kantina in France’, Snack The Big Fred, where we
sat in the sunshine and ate an excellent salad and fish with
cracked wheat, and a crepe with Nutella, and our own
Kantina Man had his photo taken with Monsieur Fred. 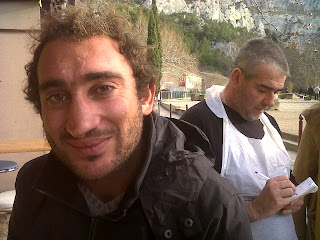 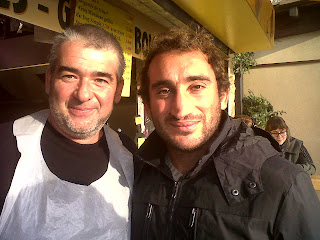 And after a long day of mixing up my words, there was
always rosé, and a sunset. 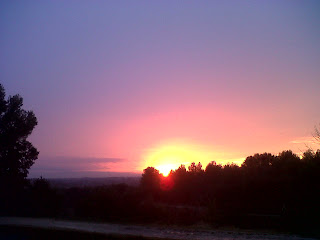