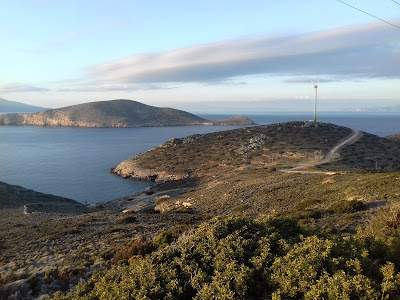 In the middle of February, we’d been back on Tilos for over a week, enjoying warm sunshine, wildflowers and mountain crags and ever-changing seas. We’d swum and walked and listened to the waves and the birds, cut off from the world. By Saturday night, it felt like a treat to put on glad rags, leave Lisa in charge of the house, and go down to Livadia.


If the north of the island had been balmy, Livadia seafront had borne the brunt of recent weather. Paving stones and rocks had been hurled about and lay scattered with seagrass and bamboo washed in by waves. Picking our way over the debris, we made our way to a shuttered and closed Mikro Kafe. The paper sign nailed to the door still announced it would be open from 6pm, but clearly not this weekend. We made our way back to Kyriakos Grill, the only place open.


We were the only customers, so we chose the one by the robust wood-burning stove, and ordered food and drinks, laughing at our quiet Saturday night. But slowly, slowly, they came: one table after another filled up. Familiar faces, people I hadn’t seen for a while, strangers. We strained to hold a conversation over the hubbub. People squeezed into every available seat. The souvlaki and chips tasted delicious.


Delos confirmed the football would be on the following Thursday: Mark’s team Arsenal would be playing Olympiakos. It happened to coincide with Tsiknopempti, the day when Greeks eat lots of grilled meat before giving it up for Lent. Two years before, I’d spent it in a taverna in Emborio, on Nisyros, which had been lively and packed to the gills. Occasionally, Apokries or carnival festivities happen in an impromptu way. We looked forward to it.


Thursday was the first cloudy day so we skipped the swim that was almost becoming a daily event, but ended up walking up a nearby hill to the remains of a farm, where I found an intact old stone cistern, then down a lovely almost-dry riverbed, the rocks worn smooth. I had bought fresh calamari and I cleaned and fried them semi-successfully that afternoon. Mark had a tentative taste, but not being keen on them at the best of times, preferred to save himself for the grilled-meat extravaganza that we would linger over during the game. 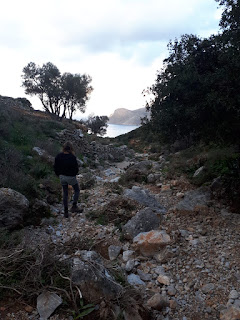 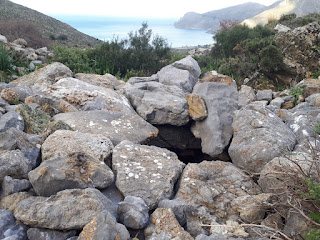 Just after 9pm we left Lisa contentedly curled on the couch, and drove across the island and down the hill into Livadia. The square was completely dark and empty. We turned right past the closed kafeneio, and it was hard to ignore that Kyriakos Grill looked surprisingly dark too. Laughing nervously, I parked the car and we walked back to find that although there were people inside, it showed no signs of being open for business. Somewhat desperately, I said something about football to Alexandra, who was still behind the counter, but it was in vain and we closed the door behind us somewhat dejected and rejected. There were no other options to celebrate Tsiknopempti in Livadia.


There would be sustenance, at least, at Remezzo on the harbour. As we made our way there, I spoke enthusiastically of the baguettes that Popi toasted, heaped with ingredients. The harbour café, although not the cosiest of settings on a winter night, was busy with army lads, all of whom had clearly just eaten and were waiting for their ride back to the base. I stepped up to the sandwich counter, where Popi was ready to take our order – only, she said, she’d just run out of baguettes so only had tost, small and now somewhat forlorn-looking squares of bread. We drank a beer, ate them, and headed to Petrino on the square to watch football.


A group of people I didn’t recognise had a table of empty beer cans, a packet of Papadopoulos biscuits, and a cute black puppy that squealed in the terrifying way puppies sometimes do. There was a young guy who works for the port police, too, and a local who runs a minimarket. We ordered glasses of the same cheap wine we buy in boxes for home and were grateful for a bowl of crisps. Mark even remarked on the flavour.


The game began, the two teams evenly matched, at least in the sense that both of them boasted quite a lot of players from neither the English nor the Greek capital. Arsenal even had a Greek player, whose name sounded like a whole sentence whenever he took control of the ball, Papastathopoulos. As the game progressed, the puppy company left and locals drifted in. The bartender half-filled tall glasses with ice and rum or whisky, topping up with a little mixer. Someone came in holding a few betting slips, and mentioned a large number. The word malaka was bandied about. The port policeman did some double-checking on his phone, grew sulky and disappeared. The game proceeded in a desultory fashion – even I could tell. Suddenly, the mood changed for the better.

The port policeman had returned, carrying two Tupperware boxes. One was full of broccoli and potatoes, the other with horta, boiled spinach-like greens. The men gathered, squeezing fresh lemon over them and digging in with forks. The TV signal was lost for a moment, but nobody seemed to care very much, too busy gorging on fresh vegetables, dripping juice all over their mobile phones. The oldest guy shouted across to the port policeman, and finally a lively discussion ensued.


‘How much did you pay for the broccoli?’
‘It’s two-fifty in Megalo Horio.’
‘In Rhodes it’s two…’
‘We pay three here…’
‘How long is it since you last boiled horta?’
‘Never – it’s my first time!’
The pouring of rum and whisky continued as the plastic boxes were emptied. There was talk of fishing, of bets on different teams. Nikos turned and asked me what team I supported in England.
‘Oh, I don’t follow it,’ I said. ‘But,’ I added naively, ‘Mark supports Arsenal. And you?’
‘Olympiakos.’
Mark watched Arsenal score a goal and suppressed his cheer. The food was finished, and gradually things grew quiet again. 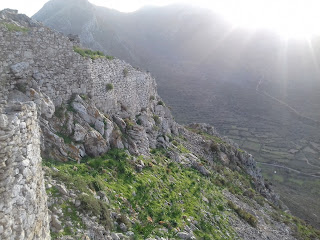 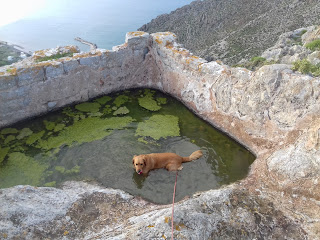 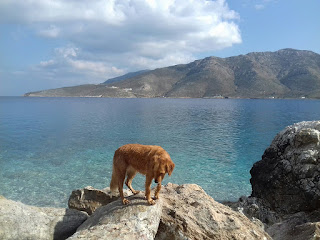