It's almost scary when you get what you wish for

It’s almost scary when you get the things you wish for. Maybe I should have been thinking bigger. World peace? Johnny Depp? But I had no time for Johnny right then...

Elizabeth Gowing has a knack for making what might seem a fairly esoteric story into a gripping read. Her first book was about an interest in honey-making in Kosovo. For her next, Edith and I, she followed in the footsteps of an Edwardian lady traveller in the region. And when I first started reading this new story, The Rubbish-Picker's Wife, about an unlikely friendship with a rubbish-picker’s wife in a minority Muslim Roma community in Kosovo, I did wonder for a moment whether it was a step too far into obscurity. Yet before long, thanks in part to her lovely writing style, I was hooked.

Gowing, a trained teacher, had been living in Kosovo for four years and was working with NGOs and international charities when she first visited Fushë Kosovë, where people lived in shacks surrounded by mud. She was there to offer a few bags of equipment which might be useful for families in need – most of them earned their money by scavenging through rubbish for recyclables. When a woman asked for money to buy medicine for her son, Elizabeth walked away. But she didn’t get very far. Soon she learned that none of the children in the community were attending school, mostly through a systemic prejudice among the majority Albanian population against people of Ashkali background. Slowly, she began to find a way to help these children to an education.

I was reminded along the way of the challenges I faced when trying to set up English sessions for the kids on our little Greek island – how exhausting it was setting it up with a lack of resources, but knowing that unless I did, they couldn’t progress. Funnily enough, then it was an Albanian family, a minority on a Greek island, whose child would have struggled to get to classes if I hadn’t been able to take him with me. I was also reminded of the sense of responsibility, and all the mistakes I made trying to do this in my first year of trying to integrate into island life, when Gowing wrote:

I had the same sense I had with speaking Albanian, that as I blundered through these foreign structures, although I could generally make myself understood I must be causing sensitive listeners to flinch repeatedly as I got things wrong, broke rules, and transgressed in ways I wasn’t even aware of.

As I followed her ups and downs in trying to get a schooling project off the ground, then building it into a sustainable organisation, the children’s enthusiasm for learning was a joy to read. It was no easy task to keep these kids in school when their families were used to sending them out to work to help put food in their mouths. But when the officials stopped finding excuses and started helping, it was clear that something significant had been achieved.

It was interesting to me to read that baklava is a Kosovo treat too, and what they call burek is so similar to spanakopita. That part of the Balkans was part of the Ottoman Empire just like Greece. There were more connections to my Greek life in this book than I’d foreseen, and I was pleased I’d had an opportunity to read this about this unlikely friendship. 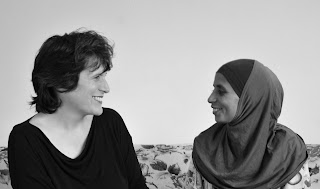 The Rubbish-Picker's Wife was published this summer and is available on Kindle and Amazon and from bookshops.
http://www.rubbishpickerswife.com/
Photo by Dorit Hoffmeister
Posted by Jennifer Barclay 1 comment:

Email ThisBlogThis!Share to TwitterShare to FacebookShare to Pinterest
Labels: book

This is a little unusual, but I am running a competition. Share this blog post with your Twitter or Facebook friends using the hashtag #fallinginhoney this week, and you'll be entered into a prize draw to win a gorgeous ART PRINT of our island of Tilos, created by my friend Yiannis, a.k.a. John Ageos Daferanos. He lives in Livadia, which is obviously the wrong part of the island, but we try not to hold that against him. (Only kidding - some of my best friends live in Livadia...) 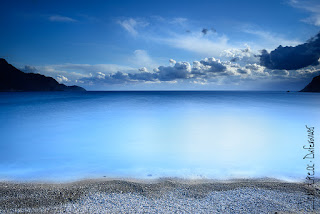 Why a competition? Well. Firstly, to celebrate the fact that FALLING IN HONEY is only 99p on Kindle this summer on Amazon UK sending it soaring up the Kindle charts, and there may still be people out there who haven't read it and would like to. (OK, there may be life on Mars, but still…)

Secondly – this is the exciting part – Summersdale will be publishing my NEW book set on the island in April 2016, and I have to decide on a title. Ideas include:
AN OCTOPUS IN MY OUZO
LUNCH AT THE BEACH
JOINING THE DANCE
A TASTE OF WILD BEAUTY
Or a translation of an appropriate expression like 'falling in honey' that I haven't yet found... Any of them would be followed by an explanatory subtitle. Feedback and input gratefully received either through comments or the contact form.

Now, back to life in Megalo Horio… 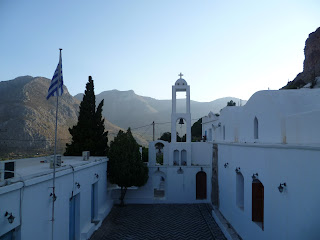 It’s that time of year when it’s so hot, I sleep outside, up on the terrace (on a comfy mattress with pillows of course - I may be weird but I'm not stupid). To block the streetlights down the alley, I’ve created a tent-like construction out of sheets and throws and mosquito net, which is strange but it means I sleep in the cool fresh air under the stars and moon.

I wake up as it gets light, am greeted by a friendly dog, and try to take her for a quick walk before the hot sun comes over the hillside. Then Lisa lies flat out in the shade, paws outstretched, and I work all day (never was the expression 'the sweat of my brow' for a day's work more pertinent) until it cools off enough to walk half an hour to the beach, picking the occasional warm ripe fig along the way. We dive in the sea and come back to work for several hours in the evening again, before collapsing into sleep.

Yesterday afternoon, with no pressing demands, I stayed on Eristos beach for hours, dozing and swimming and reading and throwing the ball for Lisa, until the sun went down behind the mountain. The line of tamarisk trees behind the beach was full of tents, and the edge of the water scattered with naked bodies, with a big stretch of hot sand in between, and the sea calm and clear and pale blue.

In the evening, after I got home – getting a good workout carrying home a three-kilo watermelon, two kilos of tomatoes and a couple of cucumbers – I had a craving for tzatziki. So I showered and dressed and walked down to Kali Kardia, passing Menelaos with his goatherd’s crooked stick coming up the steps (Yeia sou Jenni), and Fotis sitting outside the shop (Yeia sou Jenni), and ran into Astrologos, who is from Athens and one of Eristos’ most famous summer residents. He told me the planets were well aligned right now for Sagittarians, and said it was good to see me back from Australia.

‘Tilos is ena megalo kóllima,’ he said. It’s hard to translate. It’s a stickiness, something gluey - Tilos truly sticks to you, in other words. (New book title: Stuck in the honey… Or a sticky mess, as my friend Anna once put it. My friend Sam suggested something a bit naughtier about someone licking the honey off…)

‘Every summer,’ continued Astrologos, ‘I say I will visit some other islands, Karpathos, Kassos… But if I come to Tilos first, it never happens.’

I needed food. Kali Kardia, apart from fulfilling my tzatziki craving, is also a good place for me to listen to Greek conversation. There’s plenty of banter as guys arrive and leave and sit around telling tales, and I can sit in the corner and pretend to read a book.

A week ago, there’d been a full-on, fist-thumping argument as the men from the village debated who was supposed to be doing what at the upcoming festival. The animals had been slaughtered but who was going to do the butchering? Who was going to do the cleaning up after? It was only a couple of days before the biggest festival of the year, and of course everything was all right on the night. We danced under the trees at the monastery, and ate delicious goat in tomato sauce, and Lisa got some bones to eat the next day. And ever since, I've had the Ayios Panteleimon song looping in my head.

Last night someone was telling fishing stories, and the other guys would occasionally get a word in edgeways, while eating their souvlaki. Eventually I just put my book down, sipped wine and ate salad and listened and smiled.

This morning I have had to brace myself, take a cold shower, and clean the house ready for some guests arriving tomorrow. Lisa, like most dogs, objects on principle to house-cleaning. She spends days giving a house that nice, lived-in feel, spreading her hairs around, carefully arranging her things on the terrace like ornaments - a rope here, a neoprene sock there, leaving the old goat skull just so for that shabby chic look. The appearance even of a broom is enough to send her shuddering outside in disgust usually. But today, she lies in the coolest corner of the house, a serene smile on her face as I sweep the dust and sand around her. That's how hot it is. Maybe I have to give in and get air conditioning next year.

Please don't forget to share this post to have a chance of winning a gorgeous prize of a print like this one. If I get feedback on the new book title, or more people sign up to the blog or my Facebook or Twitter, I'll do another giveaway before long. Efcharisto poli! 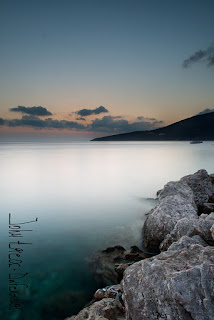