Of Squid and Storms and Spring Flowers

14 February
‘Are we celebrating today?’ asked Stelios. What? Oh! Yes, I forgot. Of course – we celebrate every day. 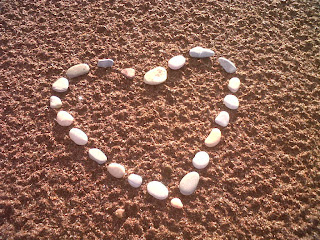 Lately on the fishing boat they’ve been seeing lots of turtles in the sea, and catching lots of squid. This week he arrived home one day with a bag full of just-caught squid and cuttlefish. We didn’t get around to cooking them that day so he mumbled as he was going to sleep, ‘I'll probably be home late tomorrow, so you can cook the kalamaria and the soupia tomorrow, however you like.’
Oh right! Yes, of course. It’s just that I haven’t had a lot of experience cooking squid and cuttlefish from scratch. Mid-morning the next day I was watching a nice American chef's video online about how to clean and prepare squid. Although young Barton Seaver was genuinely helpful and, he annoyed me slightly as he showed how to prepare the salad to go with it, the basil leaves and green beans. It’s winter in Tilos – best not to look at recipes for things you don’t have. You can’t exactly nip to the supermarket. But I was certainly bracing myself for the new experience ahead when Stelios came home early and said he’d do the cooking. Phew.
There’s not a lot of preamble when it comes to Stelios in the kitchen, and true to form he was still in his fishing wellies and jacket as he stood at a sink full of dirty dishes (my bad) removing cuttlefish bones with his hands. Those white oval things you find on the beach - they seemed to pop out so easily as if the cuttlefish just keep them in a pocket.
‘Can you get me a knife?’ I passed him a knife and soon noticed he wasn’t following the neat slicing work of the nice American video; what Barton had called 'dirty squid' were pure as driven snow compared to this. Googly eyes and beaks were being excised brusquely but otherwise not an ounce of fishy flesh thrown away. Fishermen who pull the things out of the sea with their hands don’t waste any. People who live with fishermen tend to find unidentified globs of fishy stuff lurking in the washing up. I skulked off to get some fresh air.
‘You must watch so you know how to do it.’
As the black ink sacs started ripping, there was no way I could make head or tail, so to speak, of what was happening. But I did remember one bit from the video.
‘Aren’t you supposed to remove the stomach?’
‘No, it’s tasty, we cook all! And the ink.’
OK… He’d already explained he was cooking them in their ink and it would be black. Somehow I’d imagined just a dark tinge. I did some chopping of onion and heating of oil and minutes later there was a shiny, thick, pitch-black ink soup of kalamari and squid bubbling and spitting away on the cooker. I surveyed the scene: it looked like we’d invited Jackson Pollock over to do the cooking. Definitely not Barton Seaver.
‘We can add rice if you like?’
I liked the idea of rice but still wasn’t sure if I was going to like the rest of it. I was having snail flashbacks. We sloshed in water and red wine and let it all cook with the brown rice. And then he scooped up a bit for me to taste – and oh, it tasted amazing! Sweet and savoury combined, rich. That glistening black ink risotto was strange, but wonderful. Perfect with a light frisee salad with garlicky, mustardy dressing – luckily, as that’s what happened to be in the fridge. 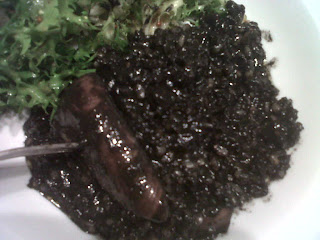 *
My friend Peter Vegas, creator of some very funny books and definitely one of my best value friends on Facebook, told me today he had come up with a solution to the Greek economic crisis: the Greek government should charge royalties on all Greek Salads around the world. The debt will be paid off within months.
I told him I was going to quote him on that and he said I was welcome: I should just name the next Greek island I buy after him. Petervegos, I think, will be a hunk of rock somewhere between Tilos and Nisyros. In the meantime, that’s all I’m going to say about the ‘situation’, as you’re reading enough about that elsewhere. Needless to say, I’m feeling almost guilty that Tilos is so quiet and lovely; and I’m proud that 800,000 people showed up in Athens to express their dismay at what the government is doing to them now.
*
A massive storm, nine to ten Beaufort, rolled over Rhodes and Tilos a week or so ago. Thankfully we knew it was coming. It took out the power early in the evening; bless them, the kids in English class, used to such things, continued doing their exercises by the light of their mobiles for a while. 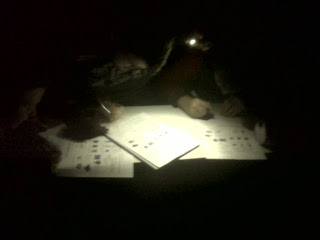 I went home and was reading in bed by torchlight as the wind howled around and rain and hail scratched at the door, and crates and old beehive frames from outside the honey factory were blown about outside. The cold weather isn’t good for bees as they can’t go outside and search for food, and so they die.
The next day I was taking a small ferry to Rhodes, and while waiting for it to arrive, I watched the last remains of the sinking sailboat being taken out of the harbour. It arrived in Tilos a couple of years ago carrying illegal immigrants from the Middle East seeking asylum, and has sat there taking up space in the harbour ever since. Well, no more - the storm took care of that, and the resourceful people of Tilos were carting off useful bits of hardwood for days. 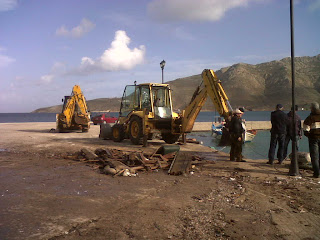 The waves were still huge between Tilos and the little island of Halki in between. Everyone started looking slightly green. An old lady sat next to me at Halki and commented how good it was that the sea was calm, bonantza. Before long she was closing her eyes and trying not to be sick too.
A couple of days later I was back home and walked to Eristos on a blissfully warm and sunny afternoon, and walked along the seashore with my feet in the sea for a while, dreaming of spring. I saw some of the damage the storm had done to the trees. 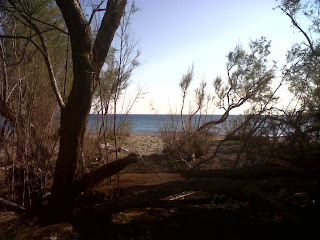 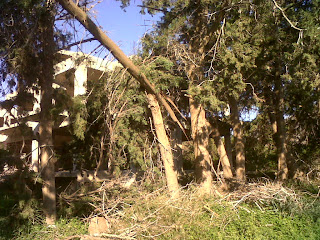 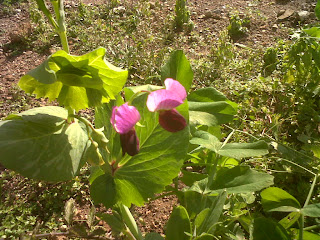 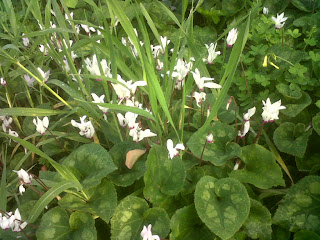 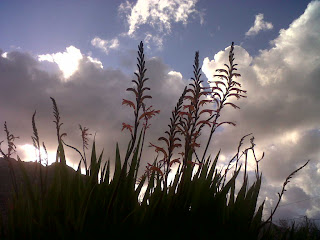 *
I finished the new draft of my book a couple of weeks ago. The title is Falling in the Honey, or Falling in Honey (which is better?); although I also had one of my late-night moments of inspiration recently and thought No Man Is an Island might be a good title too, since the book is partly about giving up on finding a man and finding an island in Greece instead...
As soon as I’d finished the latest draft, I sent it off to a few friends who had asked to see it. Naturally I was nervously refreshing my email inbox during the coming days, as if they had nothing better to do than read my manuscript all day. Even though I should know better having worked on the other side for long enough, I’m a typical writer. Pathetic.
I’d better go now just in case one of them has got back to me with some embarrassingly gushing praise – wouldn’t want to keep them waiting… 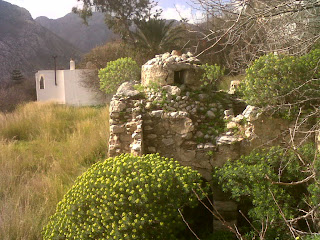 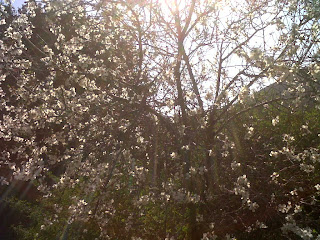 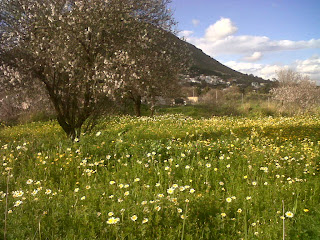