The Place To Be 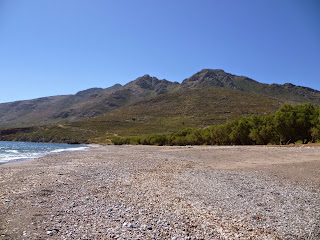 ‘Are you the Octopus lady? Back from Australia?’ asks the Englishman walking down the steps in Megalo Horio. Lisa is wagging her tail as if he’s a long-lost friend until he confesses he's not really a dog person. Well, I suppose I am the Octopus Lady, though it sounds like a circus freak, in the same way that Kyria Vicky became the Elephant Lady by association with the museum.
I have been reprimanded for not writing a blog since my return to Tilos, but who has time? There’s been fresh bread to bake, capers and oregano to gather and prepare, migrating birds to spot, a tan to top up... The verticality of Megalo Horio took a bit of getting used to all over again after nine months away, and I’m just getting my breath back. In fact, after so many months without my own home, I wanted to take time to enjoy the simple pleasure of moving back into my old house in the village.
There’s been the bright moonlight to admire, and the lemon-yellow morning sunshine that creeps across the mountains, illuminating the lines of old terraces, and the warm afternoon sun that brings out the brilliance of yellow flowers on the hillside. Clear blue sea to dive into. The quiet at night in the village, when all you can hear is a Scops owl’s haunting call, gentle footsteps as someone passes along the alley. Mornings of soft birdsong and bees buzzing and sheeps’ bells.
Lisa seemed to remember me, though she had been perfectly happy and well cared for in my absence thanks to Stelios and his parents, and house-sitters Guillaume and Natacha. But she gratifyingly made a fuss, licking me, grabbing hold of me with her front paws, rolling over for the belly-rub. And we're back to our routine of walking to the beach every day. 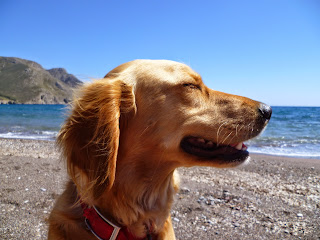 Stelios messages from his house one day to check I don’t need the car. We have an informal car-sharing scheme in place, and he has some stuff to move. A few minutes later he walks by the house carrying a fridge on his back. Lisa wants to go with him so I follow him down to the car, helping to push the seats forward so he can put it in the boot.
‘Prosekeh to jami,’ I say – mind the window. The back of the car is a different colour because the window had to be replaced after an accident last summer. ‘Etsi egineh?’ Is that how it happened, I ask, grinning, knowing how much stuff gets carried around in the car over the summer when the kantina is working.
‘Kapos etsi,’ he says, grinning back. ‘Something like that.’
The young kids play football outside the house in the afternoon. Itinerant salesmen advertise their wares – from flowers to live turkeys – over the loudspeaker as they stop on the road below: ‘Come ladies, we’re in your neighbourhood for a few more minutes’. I hear a voice that sounds like Grigoris calling my neighbour to do some work, and a few hours later when I’m walking Lisa to Eristos, I see them riding a tractor stacked with hay bales, and they wave hello. I’ve missed the easy friendliness and intimacy of the village, from the morning when we’re rubbing sleep out of our eyes to the warm evening when Rena and her family are sitting outside the shop. 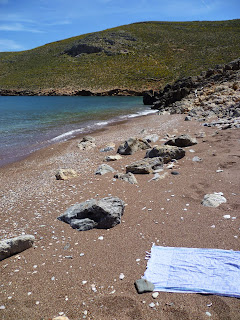 There have been impromptu dinners with friends old and new, too...
‘Echo psaria,’ says Michalis, stopping at the gate to stroke Lisa. I have fish. He doesn’t need to say they’re fresh: some things go without saying. He invites me to come and eat in the evening at the house of Ian and Margarita, an English-Polish couple who have been living just a few doors away for a month’s holiday with their beagle Lola, and are constantly insisting I join them for dinner or just a glass of wine and some aubergine salad. Margarita, like me, has happy memories of childhood holidays in Greece, only being from Poland her family used to drive to Greece with the car loaded up with all their food, even potatoes.
‘I can’t tonight, I have work,’ I protest. But later Margarita comes by and repeats the invitation. So although I’m hardly sensible after a long day, I grab a half-empty bottle of plonk and head over, and we laugh sitting out on the terrace and are happy to be a long way from the UK election.
Another evening a group of us go to Livadia to the apartment of John Ageos Daferanos, resident of Tilos since late last summer, to see his photographs. I talk to him about the images over coffee. ‘They’re my interpretation of the island, my attempt to penetrate the mystique of the place, to capture its spirit. In this isolated place there is peace and silence but also a wildness inside.’ (See the ‘Island Life’ page of this blog.)
The oleander flowers are just coming out, I notice as I start to walk to Livadia. A car driving towards me slows down, and Savvas from the post office says hello. ‘Come two packets of food for Lisa,’ he says. I ordered the Friskies she likes online. He’ll deliver them soon. ‘The next time I come in Megalo Horio.’ I thank him and walk on, beaming at how much I love life on a small island. Next morning, I receive it with a hole in the top of the bag: the clever crows spotted something that looked like food on the top of Yorgos Orfanos’ truck. 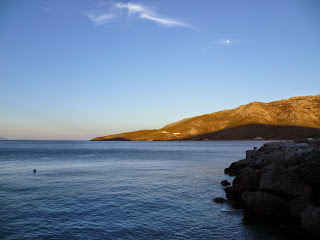 It’s almost three weeks since I got back, but people are still stopping to say hello and welcome me. They ask how long I’m staying, and I say, ‘I’m staying.’
Some who have been reading this blog since last year will want to know if I’m back here alone after following Ian to Australia. The answer is that he will stay there and continue looking after his mother, who has Alzheimer’s; I had to come back home for a while - left Australia two months ago to see family and for work - and once I got back to Greece, I knew I was staying. We didn’t have an easy time of things, having barely spent a month alone together while I was there. We decided to let go, get on with our lives separately and remain just friends for now.
I’m glad I had courage to lose sight of the shore, but now I’ve trusted and followed my heart back to Tilos, the source of so much happiness for me. Greece was still waiting. Lisa was well. I returned here at the same time of year, late April, that I first moved here four years before. My lemon tree, cut back over the winter, is already flourishing with fresh green leaves. Time to plunge into the island's deep waters and lie on its hot sands again. 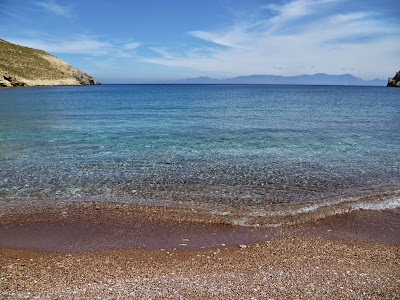