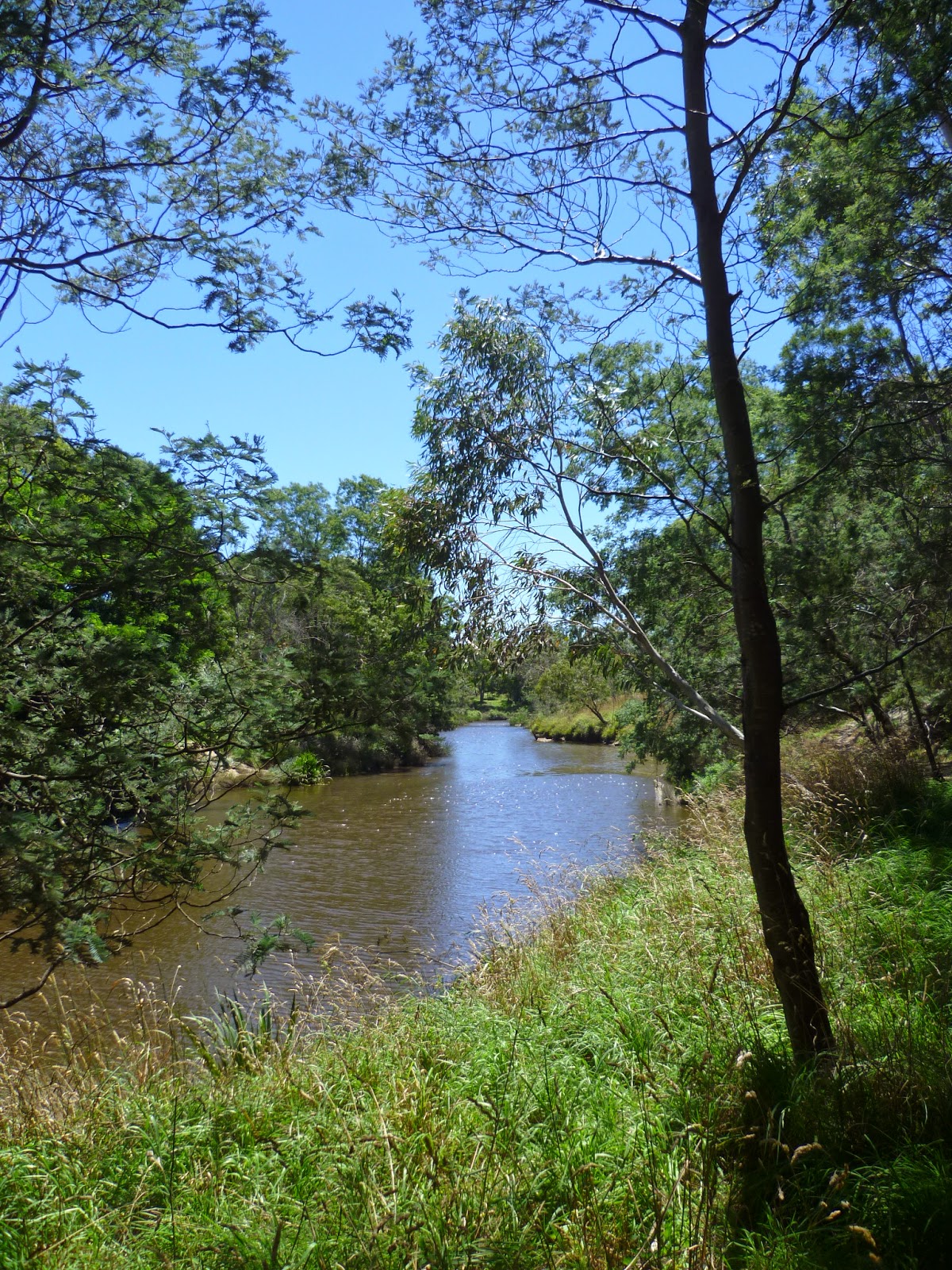 I was on the lookout for duck-billed platypus in the Wingecarribee River, but all I could see so far on the calm, mud-brown water were some duck-billed ducks, which were nice but not quite as exciting. As I looked down at the trail I spotted a shiny lizard, about as long as my hand, wriggling fast into the undergrowth - then another, and another, leaping from the rocks to hide. It was about four o’clock, and there was nobody else about, so probably they were basking in the heat from the sun on the boulders. Then a little further on I saw a couple of bigger ones, different, and as I stopped still, so did they. 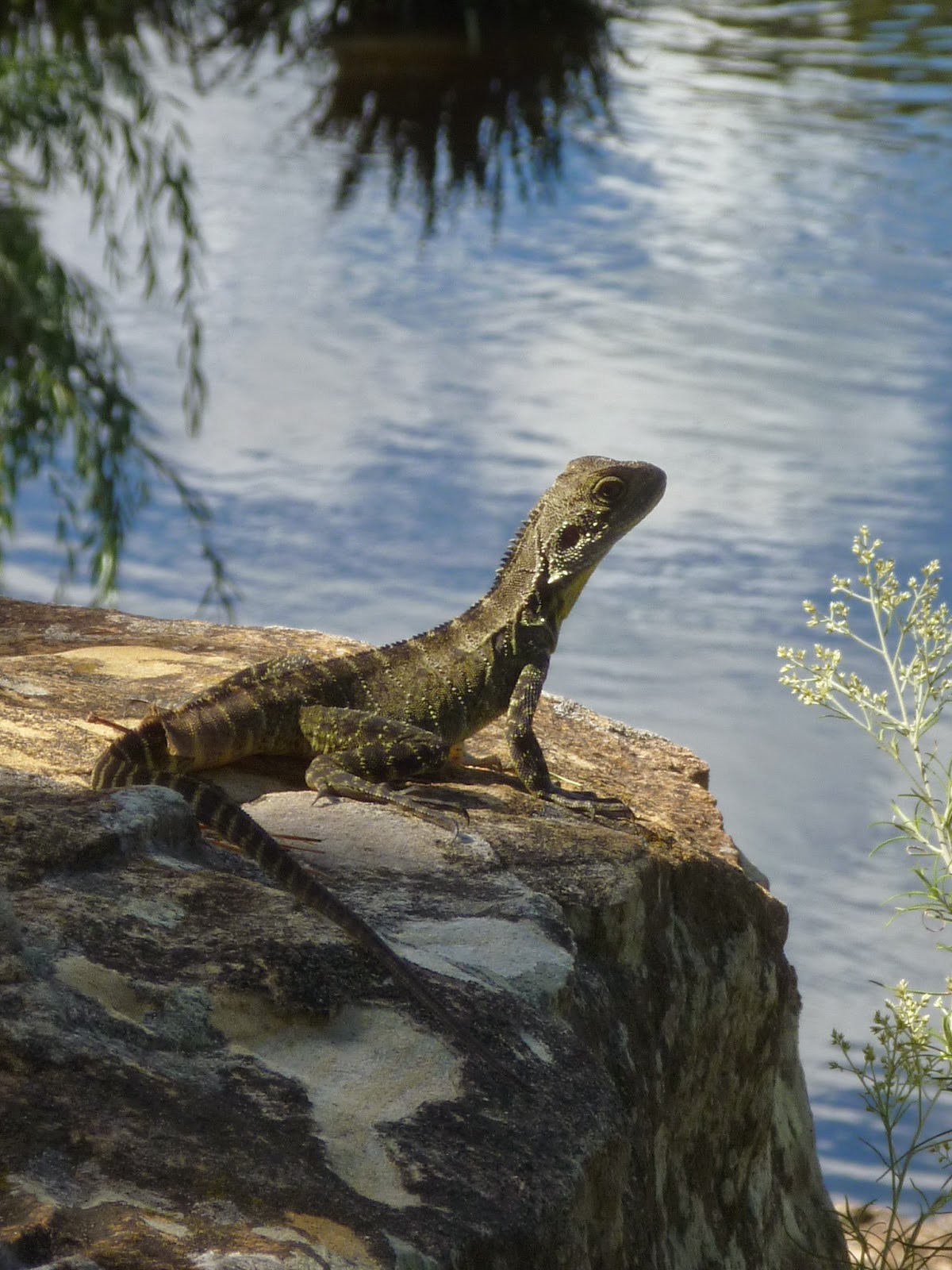 These were over a foot long, pale green-grey with ridged backs and black stripes across their tails. They kept their eyes glued on me for the ten minutes or so that I watched them then reached slowly in my bag for my camera. I later learned that they were water dragons, native to eastern Australia, and they must have got used to people as the trail was close to the village. I’d only continued a few more steps when I heard a splash in the river below and saw something swimming like a wiggling arrow across the surface, before pulling itself up on the rocks. Sure enough, another water dragon. 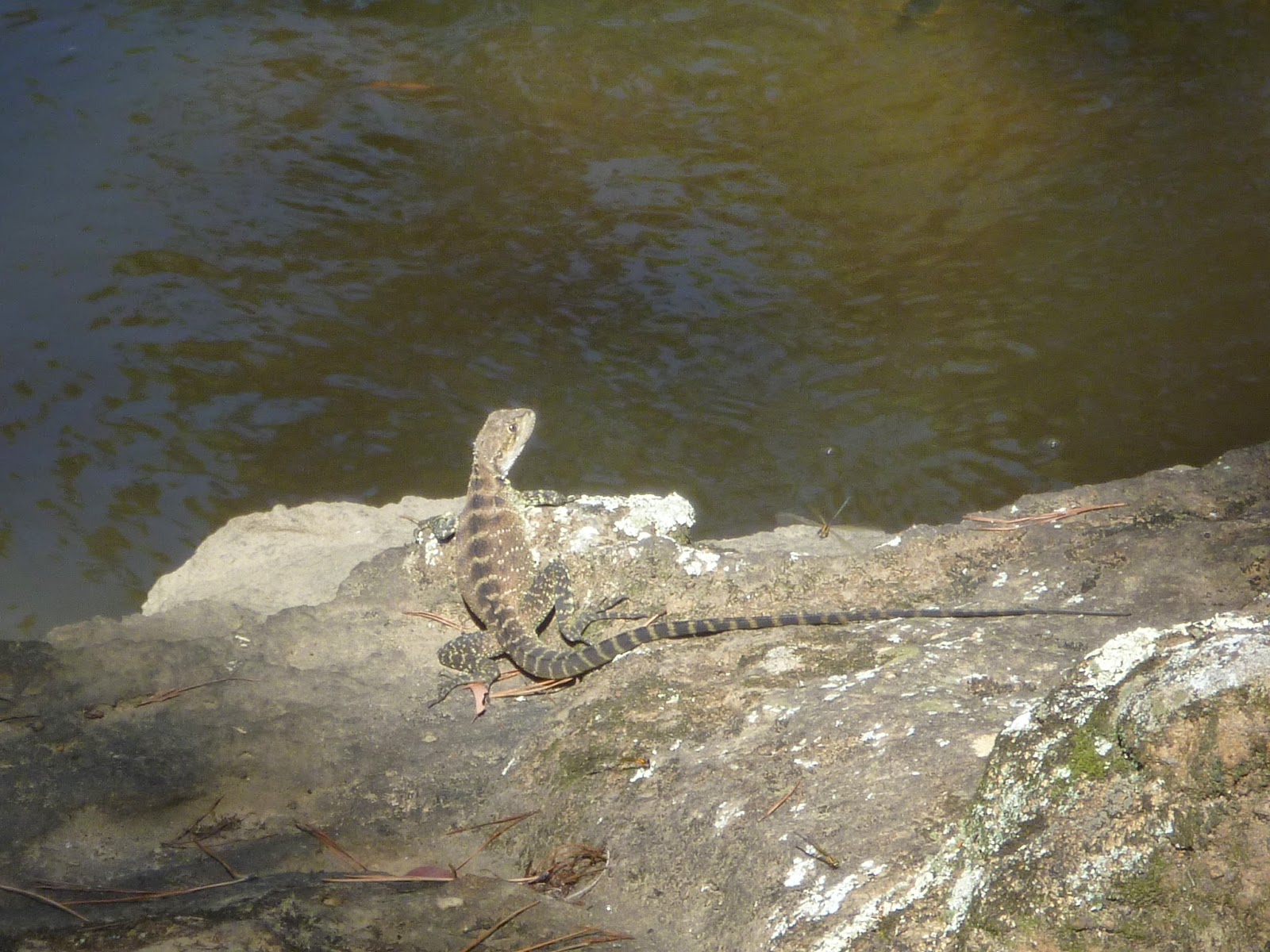 The trail was just at the back of the village, and soon I was looking at a church that made me feel I was back in Britain, except for the towering pines surrounding it. This was the Anglican church, built in a Gothic revival style from stone quarried where I'd been walking.
Down at the bottom of the hill and across the bridge over the river, meanwhile, was the Catholic church with its golden statue set in the ochre stone, which – especially with the deep blue sky above, and the heady scent of more pines – reminded me of the south of France. Behind it was a loo where the management had thoughtfully placed a sign, presumably for the edification of the waiting. Father William McGinty had arrived in Australia, it said, in 1847 from Dublin, Ireland, and was appointed first pastor of Berrima district. St Francis Xavier church, designed by Augustus Pugin, opened in 1851. Then it seems McGinty deemed his mission in Berrima complete, as by the following year he was pastor of Ipswich, Queensland. 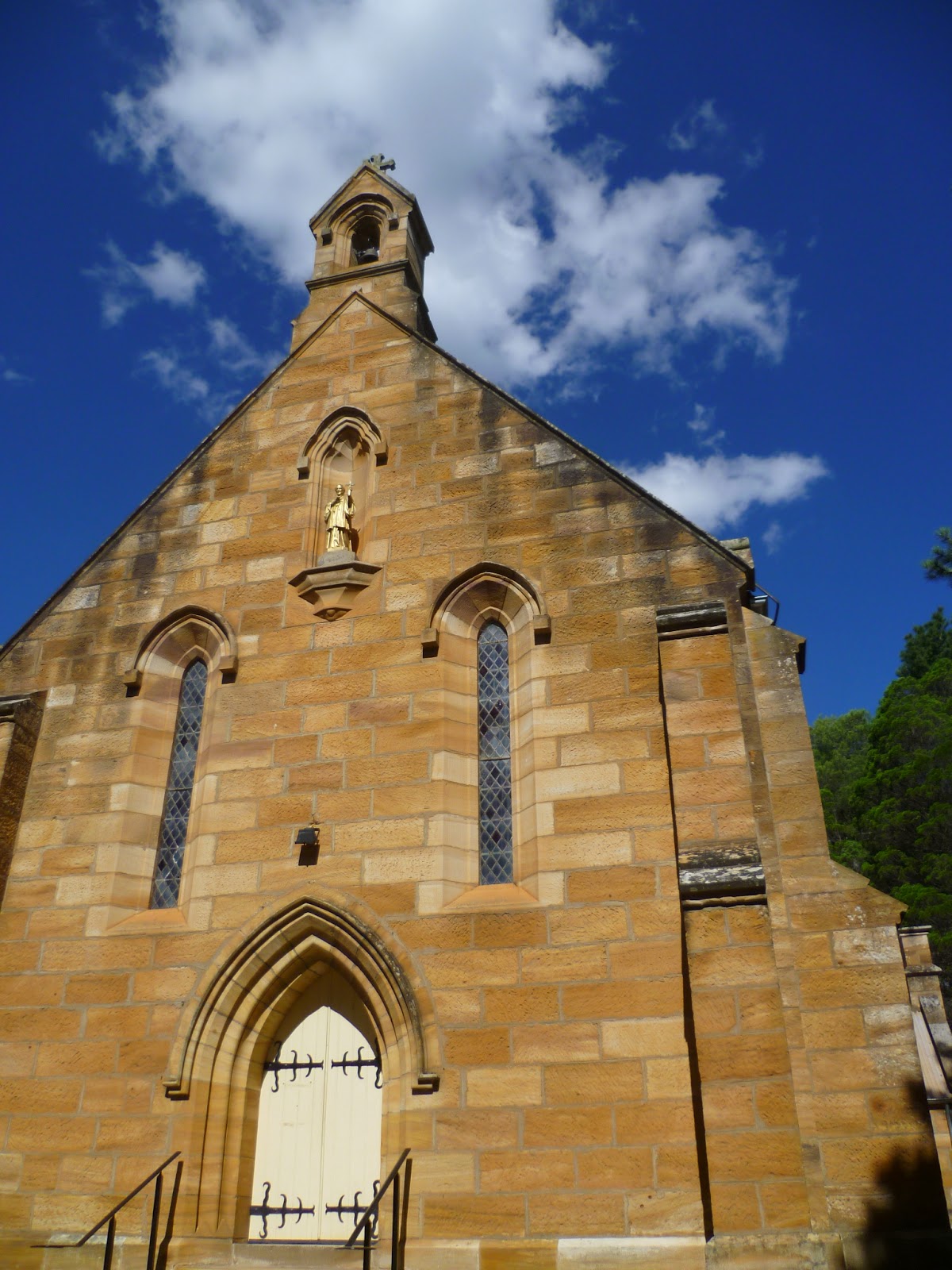 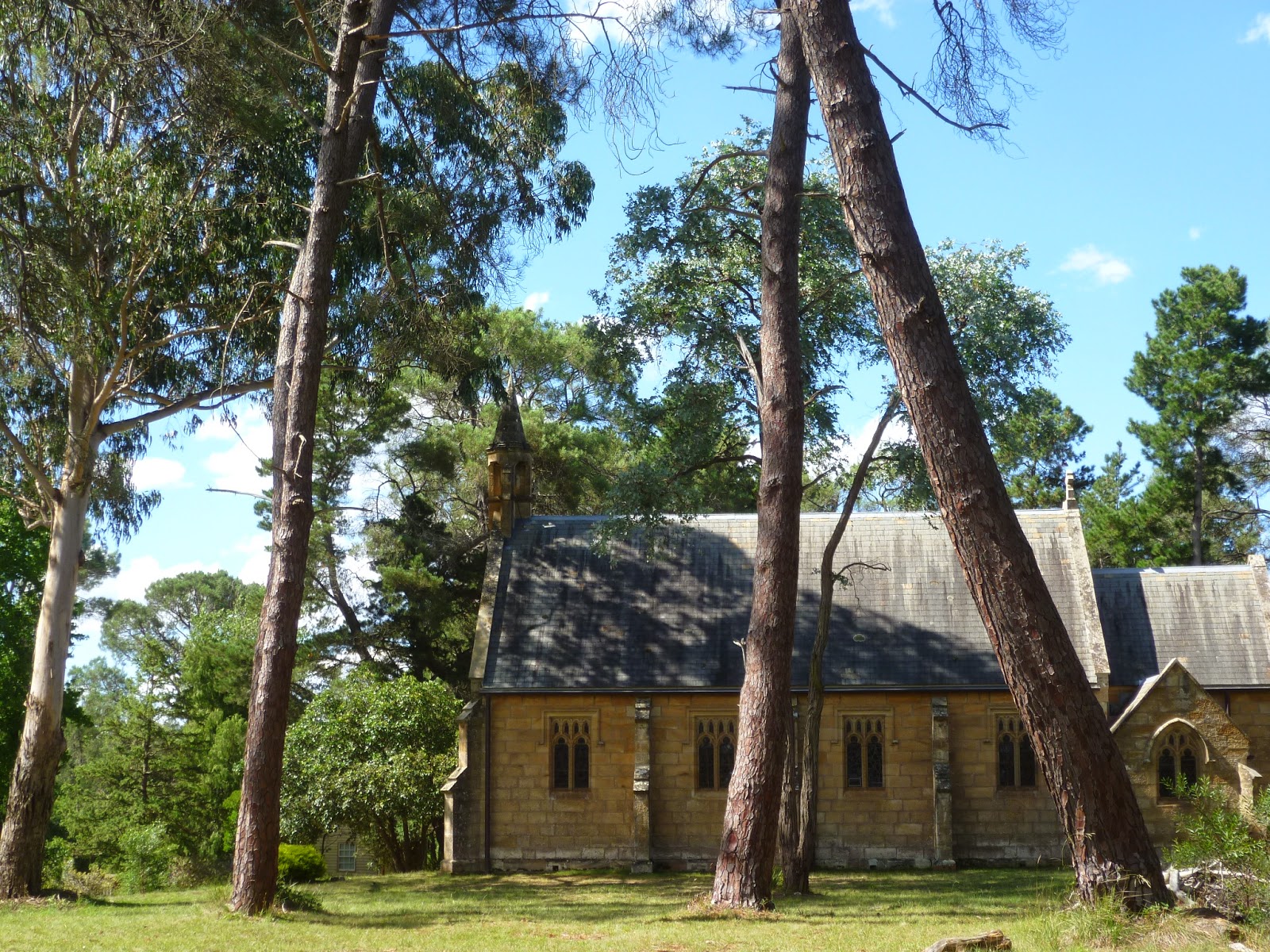 Berrima is in the heart of the lush Southern Highlands of New South Wales and today just 400 people live in the historic village in the curve of the Wingecarribee. It was rather grandly laid out in the 1830s in great confidence that it would become a county capital, and at one time had some dozen inns catering to horse-drawn traffic; there were bakeries and a market place and a military barracks. But it was by-passed, first by the railroad – the closest stop is Moss Vale, 9km away – and then by the freeway, which sadly is still audible at the quiet times of day, though hidden by dense forest. 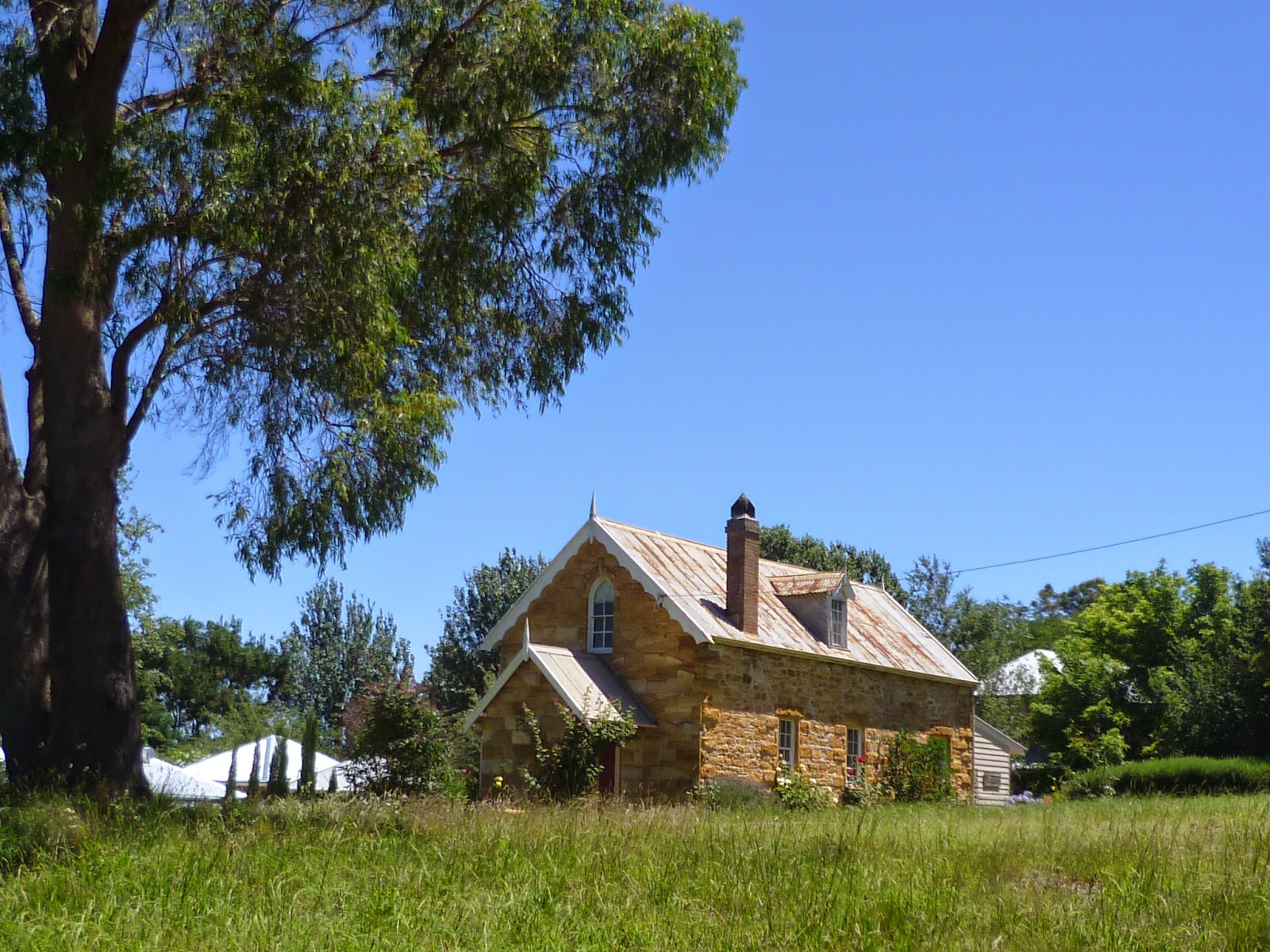 It has only one inn left, but a good one: Australia’s oldest continuously licenced inn, dating from 1834. It was first licenced to James Harper, a son of convicts who married a convict and became a police constable, set up the pub and then built himself a brick house now called Harper's Mansion, one of the most visited National Trust properties in the state. Perhaps Berrima's most famous building, though, is the gaol, completed in 1839 and still serving as a minimum-security prison. The second ever trial by judge and jury was held at the courthouse here, and the first man hanged at the gaol was the unfortunate Paddy Curran. 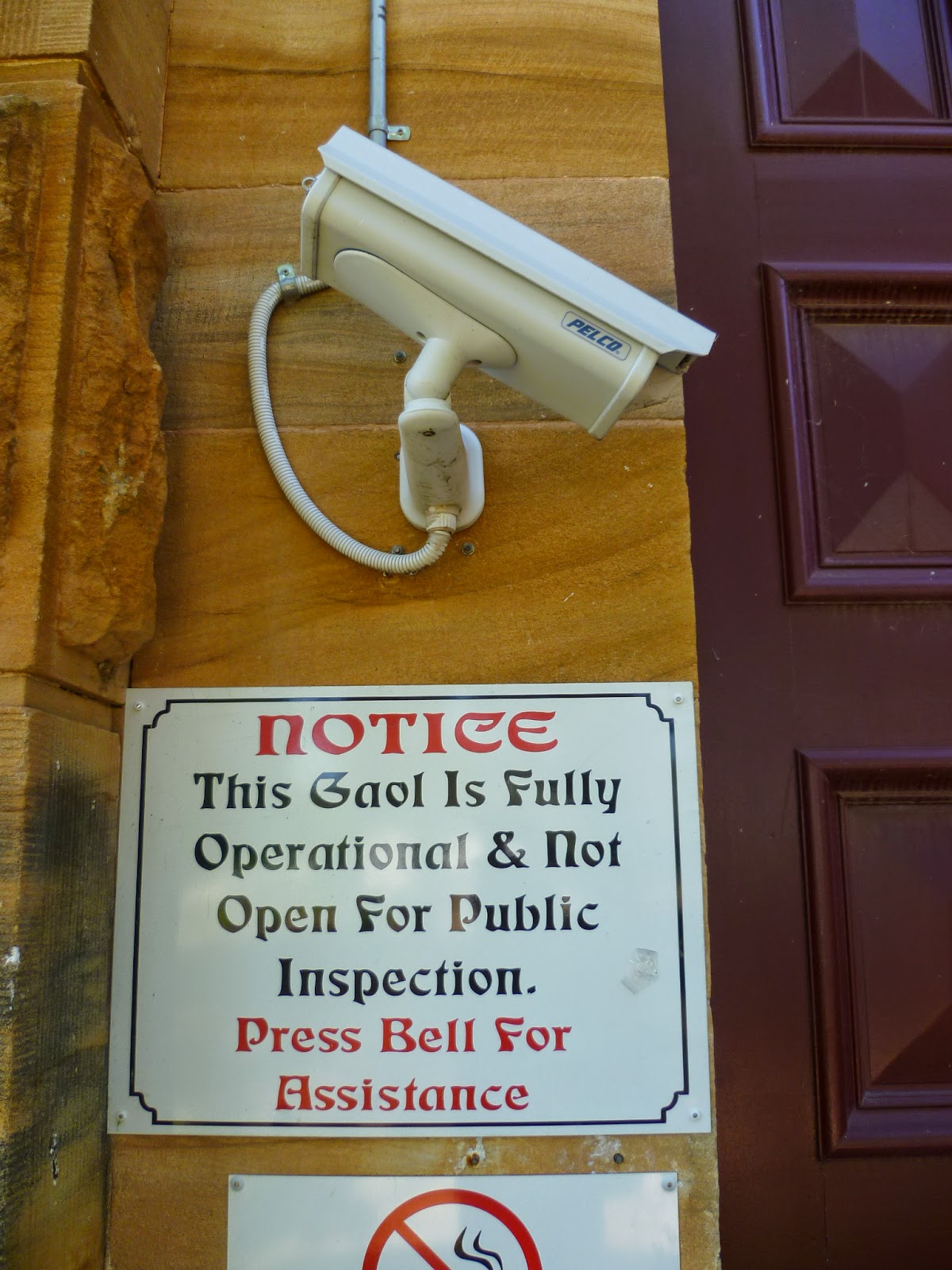 All of this, coupled with the fact that the Southern Highlands is a wine-making region and wineries abound nearby, makes Berrima a draw for tourists, with Sydney only an hour and a half away by car. Every other building seems to be a fancy ‘patisserie’, tea room or upmarket gift shop. The old general store has, like most, been turned into a café. My mission to buy food – since we’re lucky enough to be house-sitting here - was in vain. If we’d wanted to buy some hand-stirred jams, a wooden duck in boots or something made from alpaca wool, we’d have been all right. 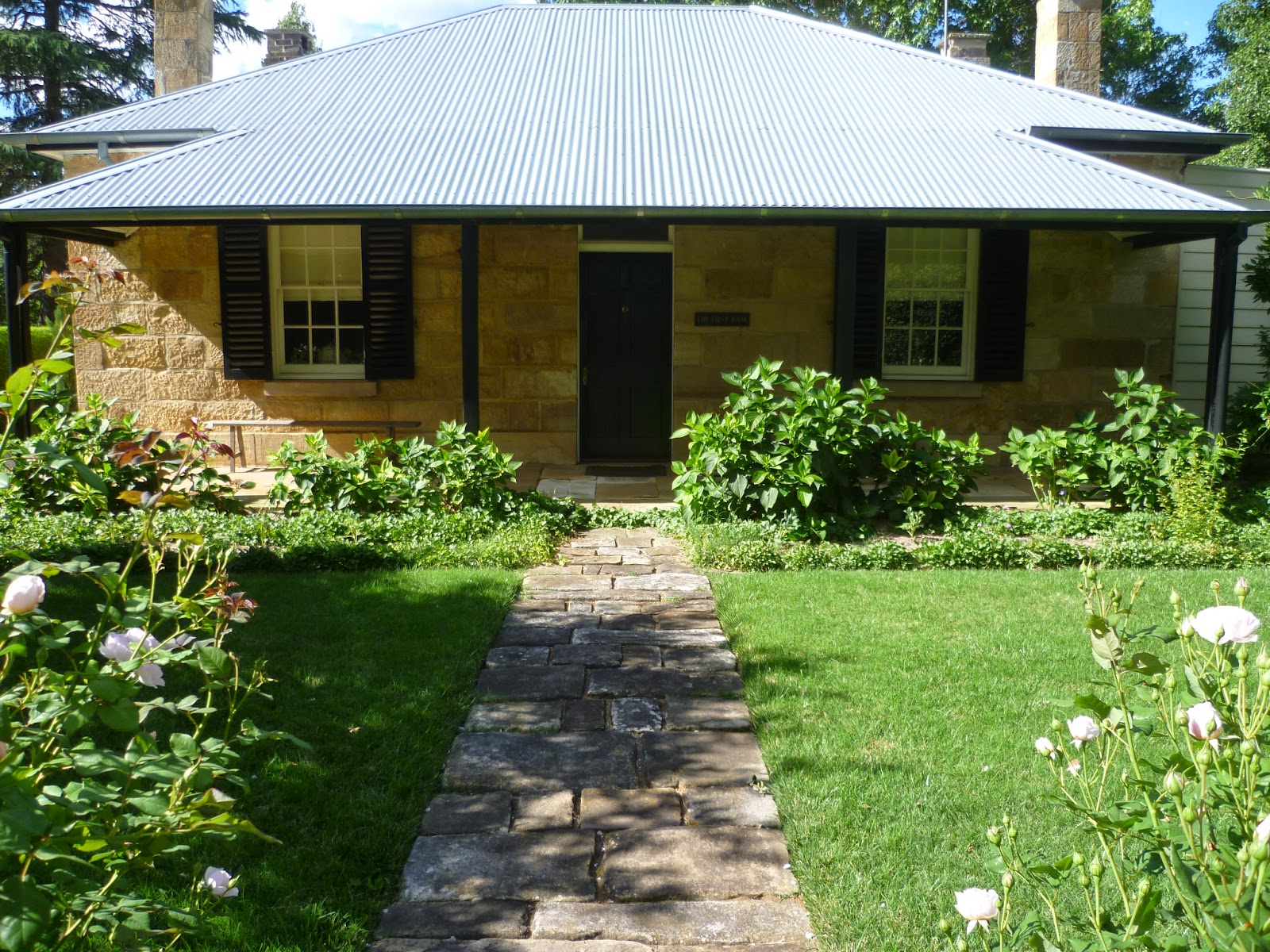 I was making my way around the park after my water dragon encounter, past the old bank and bakery (above), when I saw an ‘artist’s studio’. Through the open door I glimpsed what appeared to be a VW beetle painted with emus… I poked my head inside and was encouraged to come and look around. And thus I had my unforgettable encounter with artist Peter Browne.
The paintings that covered the walls transported me out of leafy green Berrima - with its willows overhanging the lazy river - and into an outback Australia of searing heat, bare skinny gum trees and scrubland, with wooden shacks, lanky farmers, lankier horses and curious animals. The details made me laugh aloud, especially when I saw one called ‘Early Boat People’ showing a first encounter between Aboriginals and strangely dressed colonials clutching those rabbits that would go on to wreak such havoc.
‘Well, you survived that!’ said the man at the table, who I guessed might be the artist, as I moved on from the first room into the second. We got talking, and he said some people asked him if he had any paintings of Berrima. ‘Why would I paint Berrima?’ he said. ‘It’s all English trees, English houses – what’s Australian here?’ He’d spent most of his time as an artist in the tiny settlement of Silverton, near Broken Hill out west, a place I’d tried to get a house-sit but had been thwarted by transport difficulties. I told him about the water dragons I’d seen on the trail.
‘Did you see the wombat poo?’ I laughed and said no, but then I wouldn’t really know what it looked like. He Googled it for me. ‘Look! They're cubes.’ I looked. Remarkably, they were. ‘And they like to leave it in little piles on rocks. Kind of puts you off lamingtons,’ he said, referring to the cube-shaped Aussie chocolate cakes.
After that, we talked about lots of things, mostly related to the sense of the absurd that shows up as detail in his paintings. He told me about the bush poet Banjo Patterson, who wrote Waltzing Matilda – ‘funny that we have a national anthem about a sheep thief’ – and how Spike Milligan lived for a while in Woy Woy and joked about his cork hat (for keeping off the flies), that ‘the bottles must have fallen off’. He told me he had noticed the news stations were excitedly reporting a shark ‘lurking’ off the coast – how do we know it was lurking? Was it loitering with intent? Maybe it was just swimming. The cute baby seal found on the steps of the opera house, though, wasn’t ‘lurking’, it was ‘basking’.
Most visitors who came to the studio, said Browne, if they hadn’t come especially to see his work, were tourists who had only a few minutes to spend in each shop and were more in the market for a pot of jam. He was thinking of setting up a jam stall to cater to them too. Too many people only wanted to look at things they could buy. ‘Mall-itis,’ he called it.
His banter about Australian culture, especially that of the Silverton area, was full of references that sounded to me wonderfully colourful and somewhat surreal, such as a Turkish ice cream man who shot at a train and started a war. And the wonderfully colourful and somewhat surreal, or eccentric, of outback Australia was all around me on the walls of the studio. 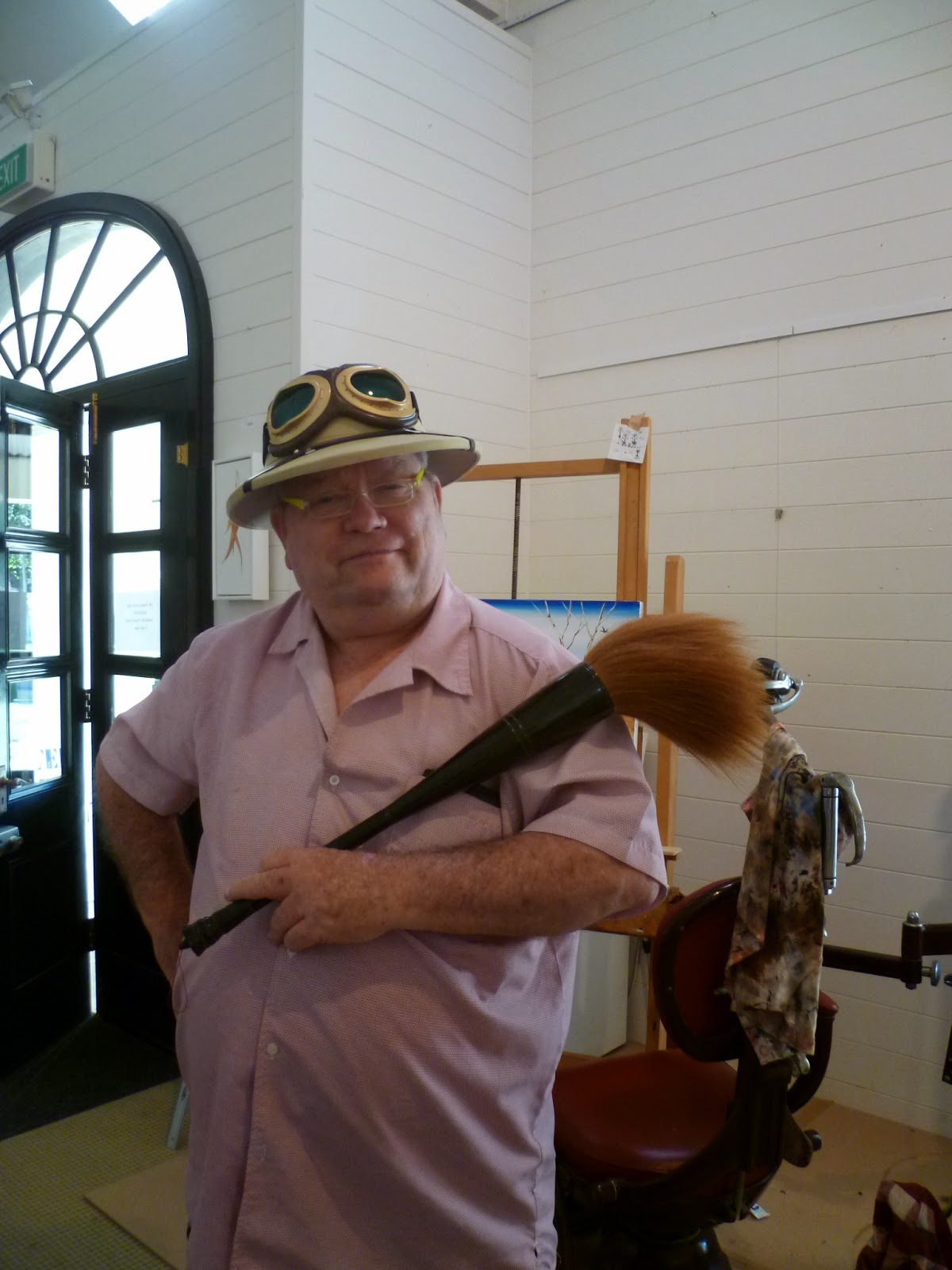