Artsy Rooms at the Pallas Athena 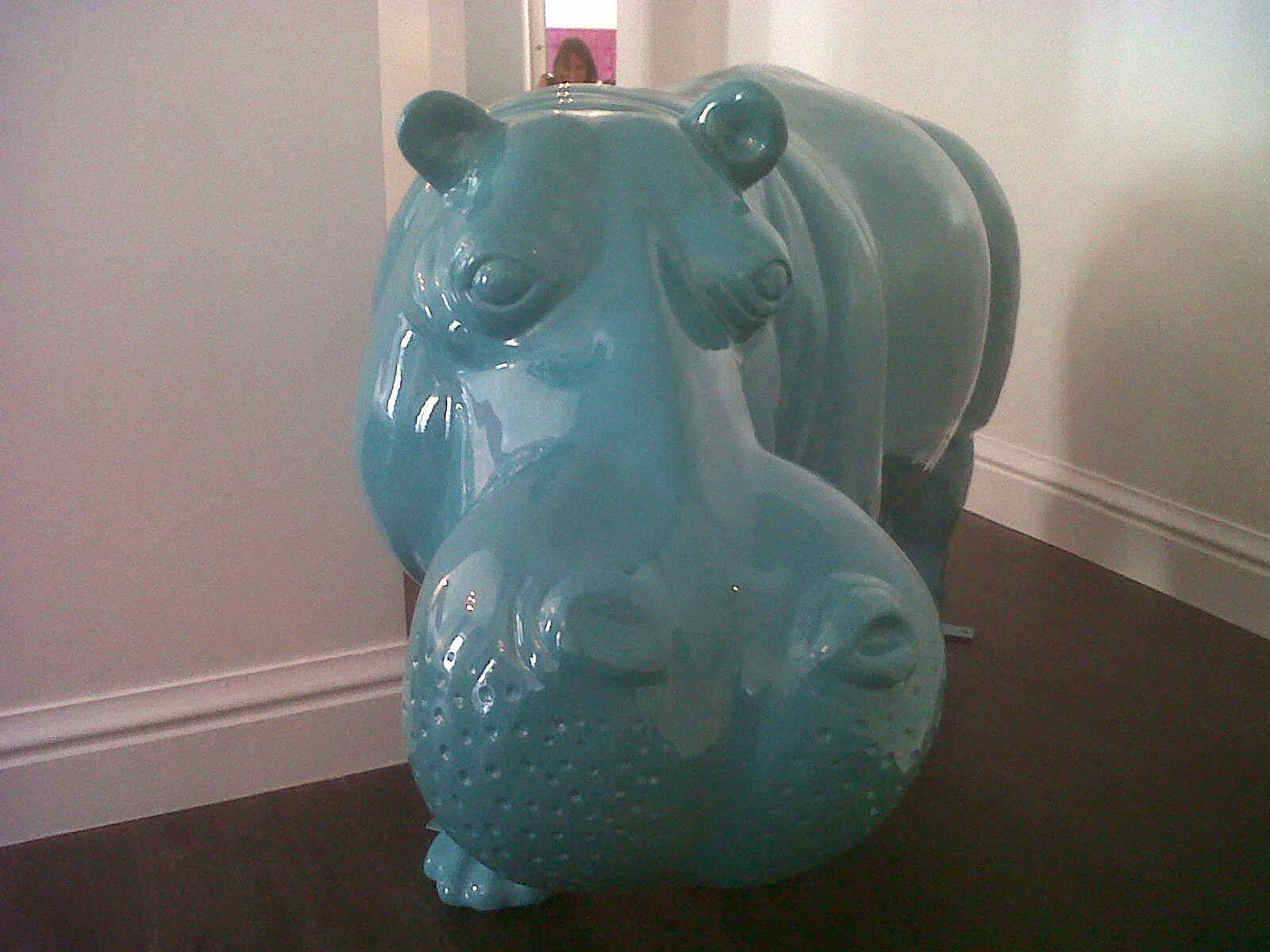 I was really in no fit state to be walking through the doors of a smart new boutique hotel.

My flight from Sydney a month ago arrived in Athens at 6 a.m. I’d spent the most gruelling section pinned into a middle seat for more hours than I’m usually awake, my back protesting so much that I couldn’t sleep and the only thing that kept me going was watching seven episodes in a row of House of Cards. Thank you, Kevin Spacey, I love you.

The Etihad flight connected at Abu Dhabi, where I waited impatiently amid the masses for a missing boarding pass, and guzzled the most essential glass of wine I have ever had. I had no idea how much 40 Emirati dirham was, but frankly I would have paid it if it was 40 US dollars.

Aegean welcomed a handful of passengers on board their section of the journey with sweets and smiles and let us all lie down across three seats each, so at least I was feeling vaguely human in the morning as I took the Metro to Monastiraki station and, turning my back on the Acropolis, walked down one of the liveliest streets in the city, Athinas, passing the buzzing central markets. 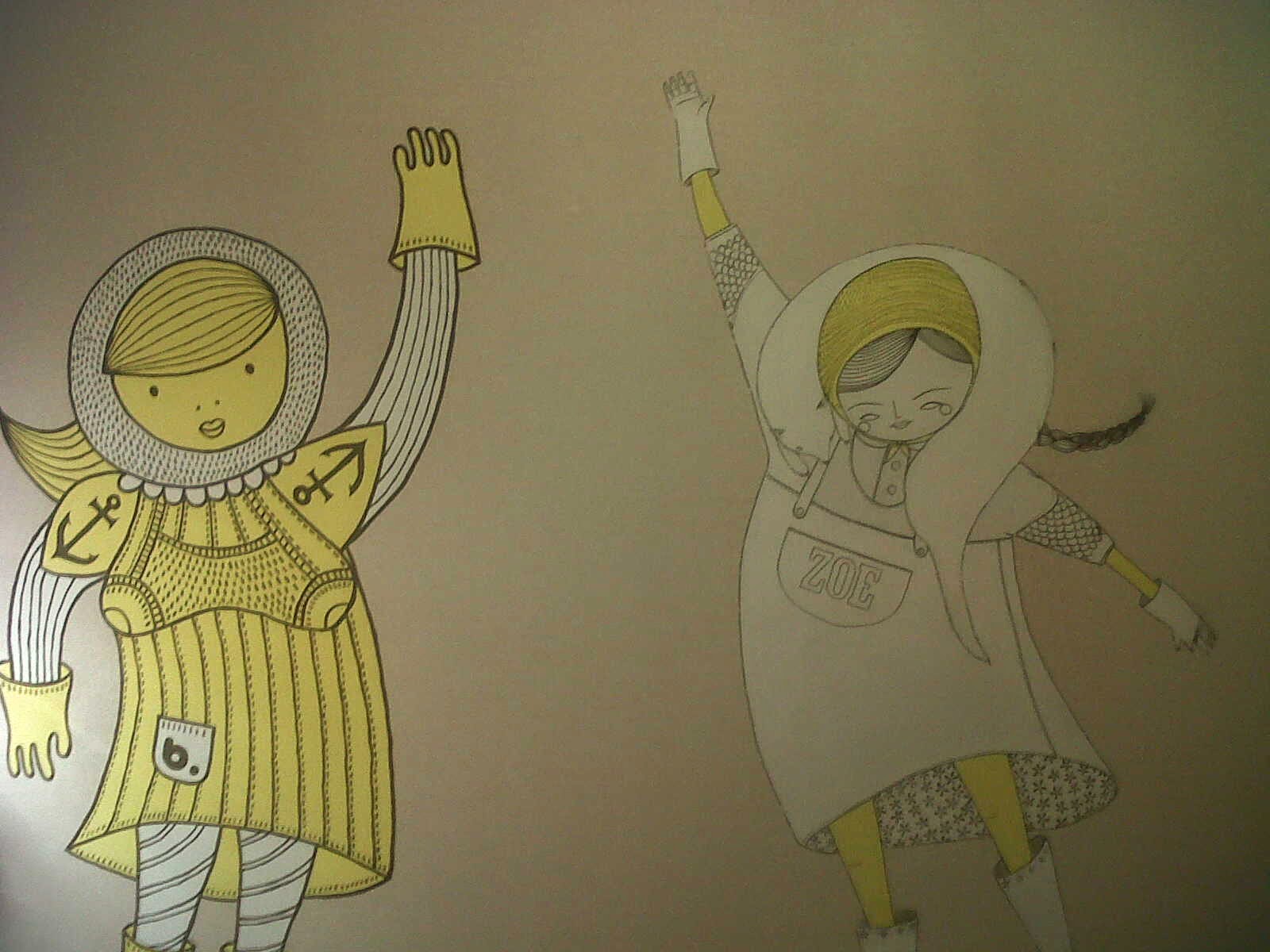 A week earlier, I’d received a press release about the opening of the Grecotel Pallas Athena. What intrigued me was the design element. One of my favourite things about Athens, as you may know if you’ve been reading this blog for a while, is the street art. The Pallas Athena, a five-star boutique hotel owned by the leading luxury hotel group in Greece, has 63 rooms/suites individually decorated by street artists. I was catching a ferry back to Tilos so I couldn’t stay, but I could drop in for breakfast.

Feeling somewhat self-conscious, I was welcomed into a cool lobby and my backpack was whisked out of sight as I was invited to make myself comfortable in the dining room/lounge with its airy terrace on the first floor. Refreshed with grapefruit juice and mini-pastries, I learned about the hotel concept, then had a tour around a few of the rooms. 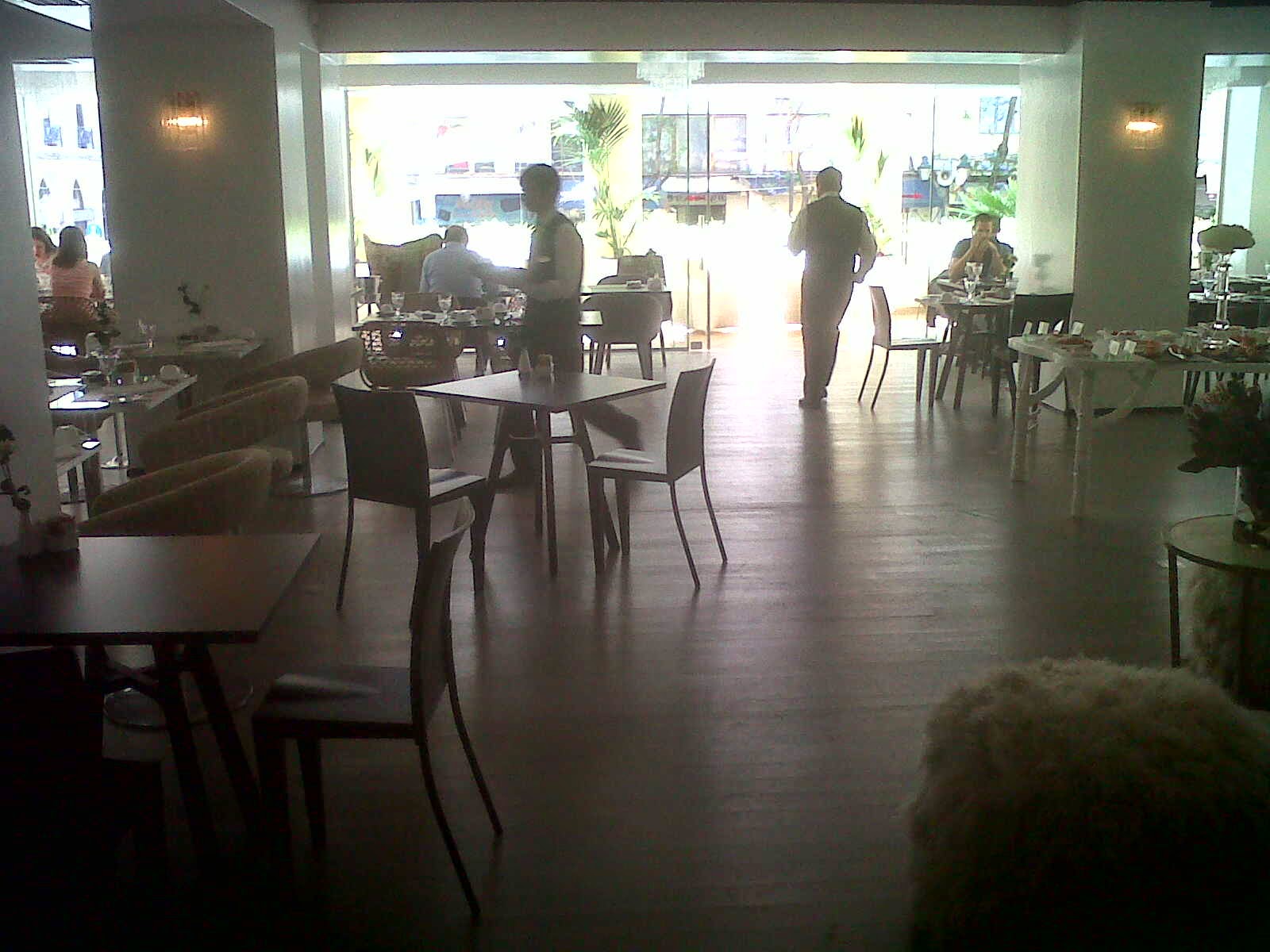 The hotel opened in January 2014 as the newest boutique art hotel in central Athens, and has both chic art suites and whimsical graffiti guestrooms, featuring such artists as ‘b’ and ‘Dreyk the Pirate’. All the rooms were bright and uncluttered and comfy-looking. For single travellers or couples, they're stylish, playful and relaxing. For families, the spacious interconnecting rooms would be brilliant fun. There was even an octopus... 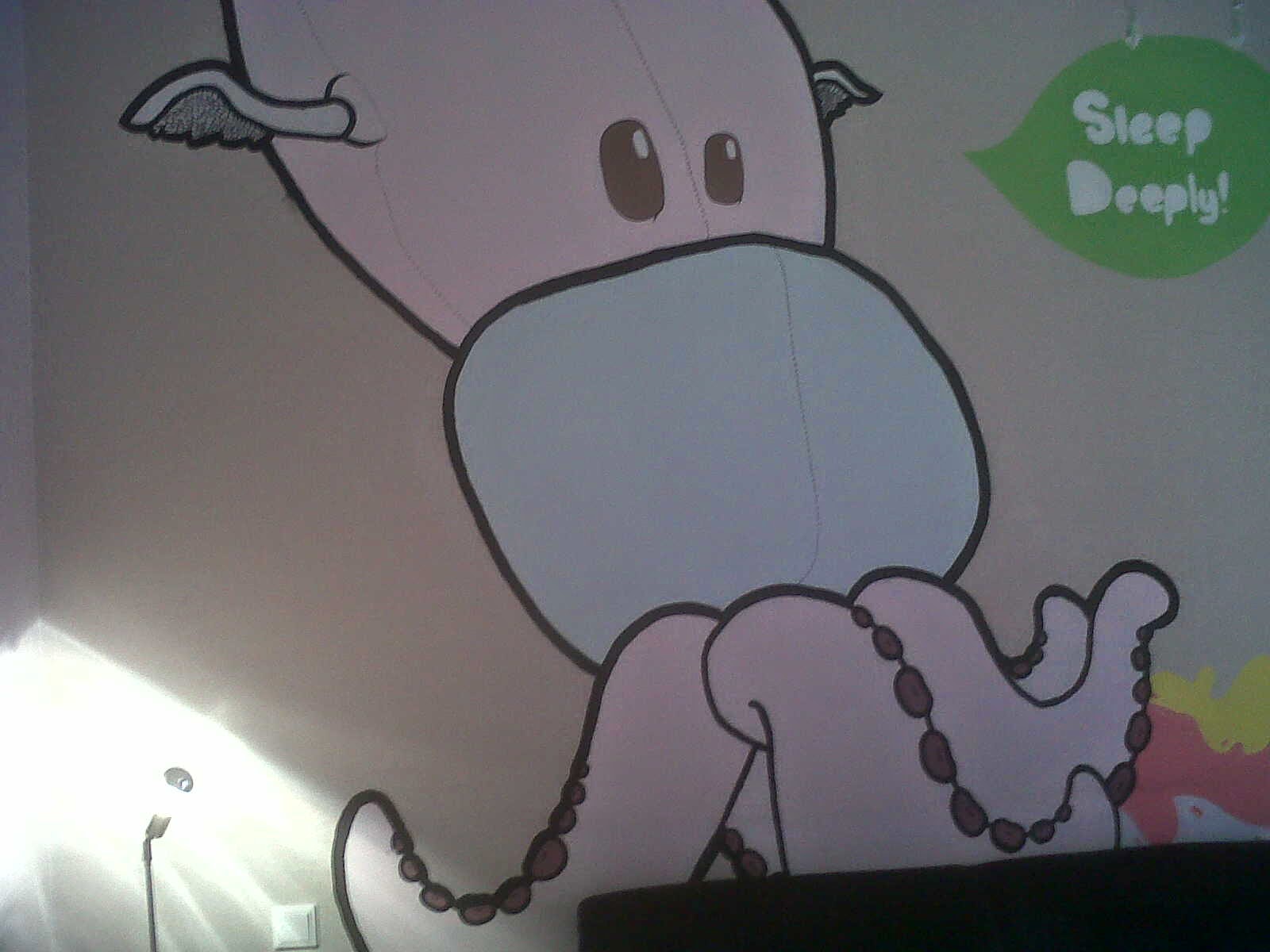 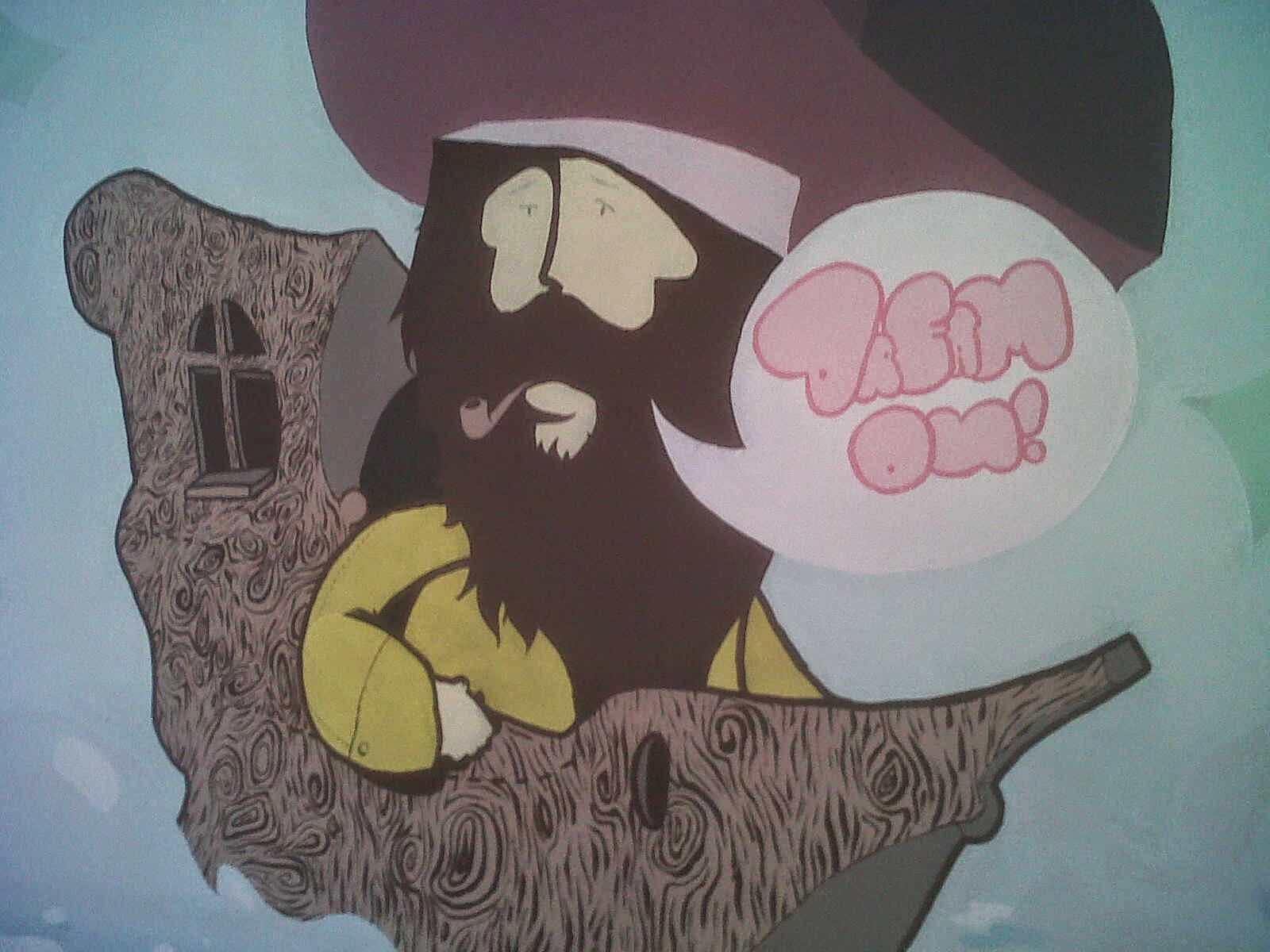 I felt I wouldn’t be doing a serious job of checking out the hotel if I didn’t sample the Eau de Grèce luxury bathroom products by Agreco Farms in Crete, where the hotel group originates. 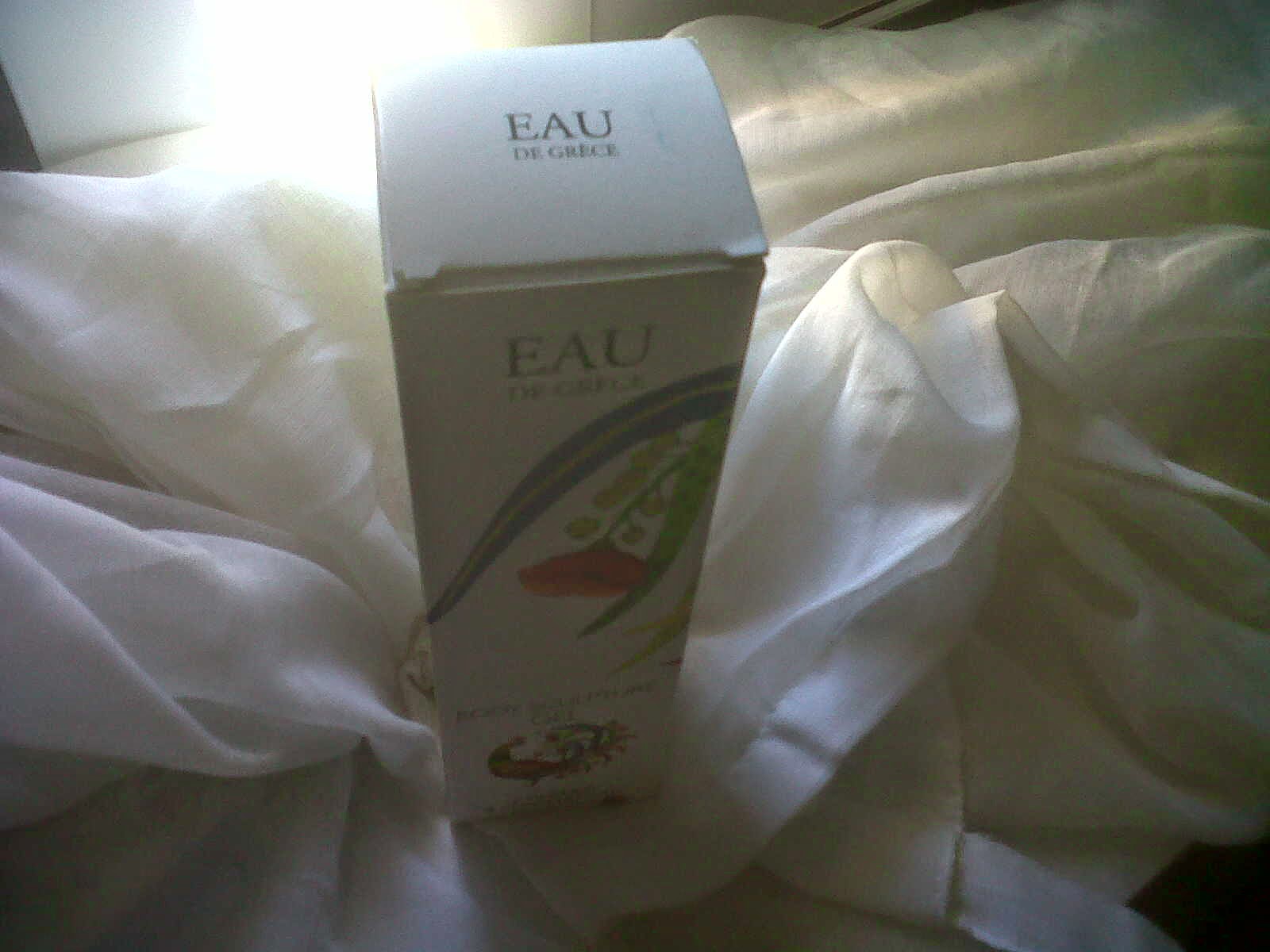 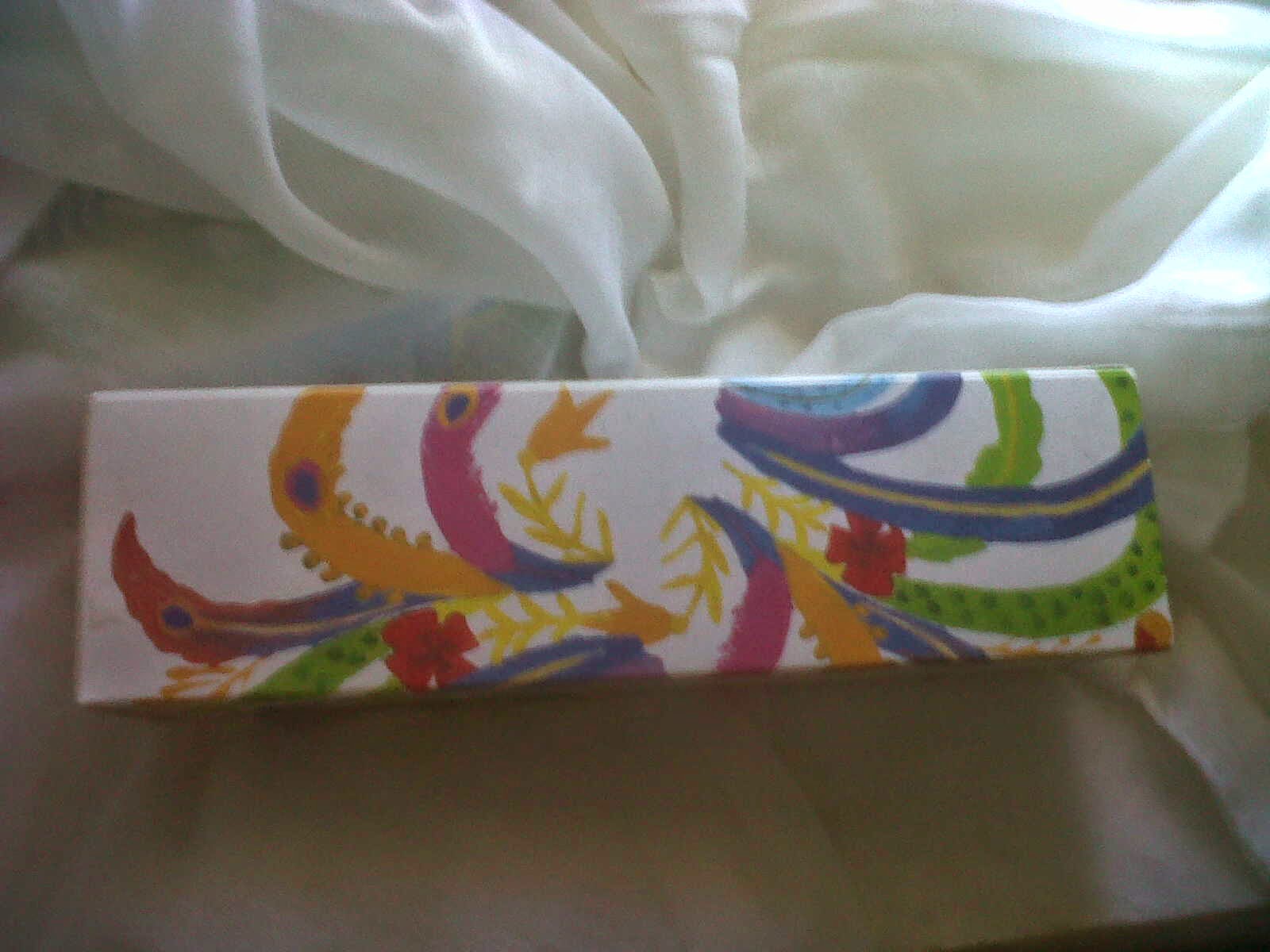 A body sculpture gel to ‘refine your silhouette, giving a more toned and firm appearance’, felt like just what I needed, after twenty-four hours of stuffing my face with airline food. Though first I’d need a bath.

Thanks to the Grecotel Pallas Athena for a delightful welcome. I should add that the hotel group was a leader in environmentally-friendly practice as early as 1991, which is a big plus point for me. And, checking out their website today, I see they still have some great room deals available. Well worth checking out for a city break, or if you're passing through to the islands... The Daskalantonakis Group also has super-plush places in Crete, Mykonos, Kos, Rhodes, Attica, the Peloponnese and Halkidiki.

Email ThisBlogThis!Share to TwitterShare to FacebookShare to Pinterest
Labels: Athens

The Best Things in Life

A couple of days ago, I took my friend Ali to the ferry - she'd been staying with me for a holiday - and went into Remezzo bar on the quay to buy a couple of frappe coffees for us, when I realised I didn’t have any change. I sheepishly handed Popi behind the counter a fifty and apologised for not having any small notes, psila.

‘Na’seh kala kai na echeis panta hondra,’ she replied. May you be well, and always have large notes. 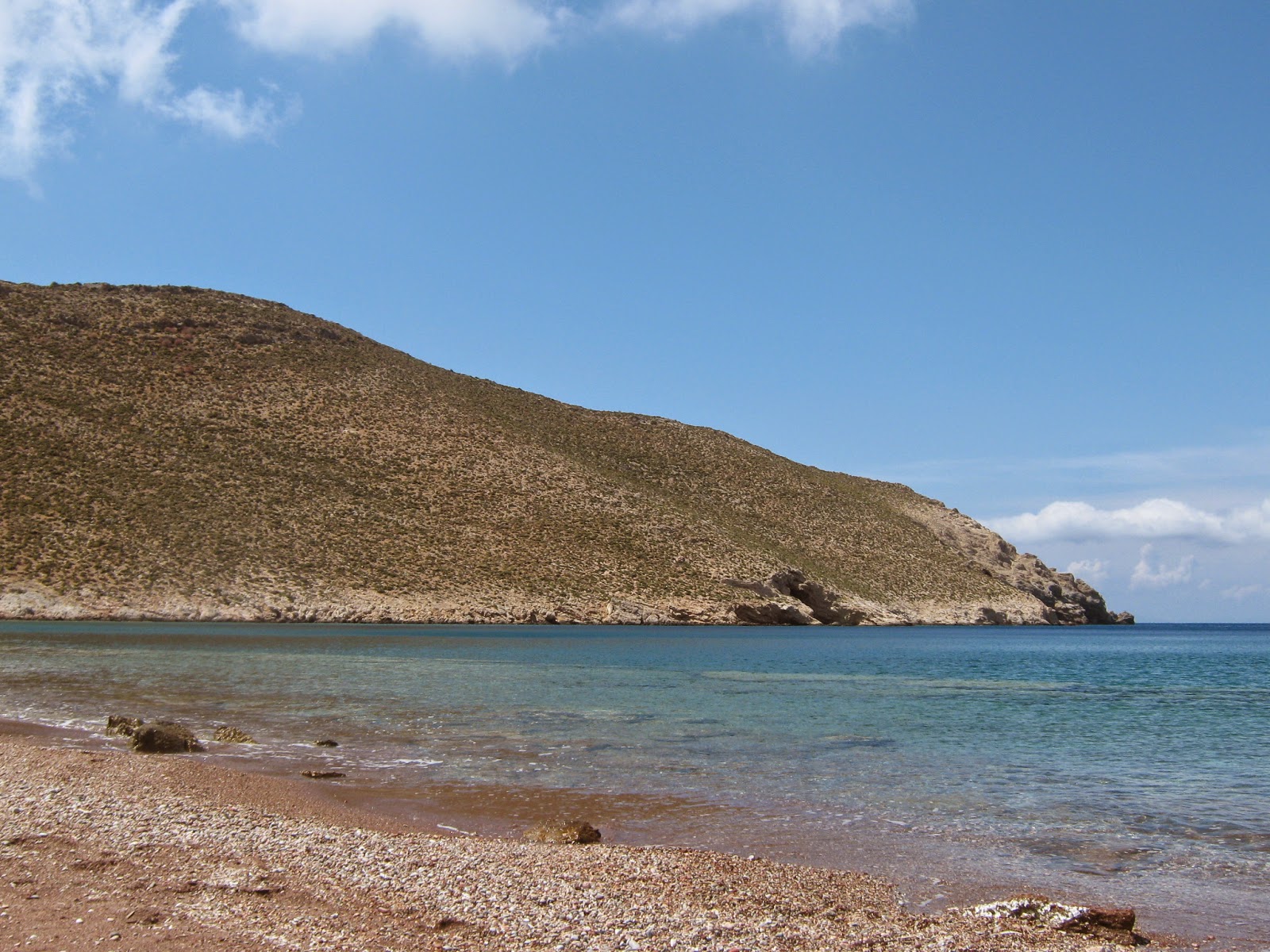 Last year, my freelance contract as commissioning editor came to an end, reducing my income in a stroke by about two thirds. I was overdue for a change of scene, but for someone who’s always cautious about money, I won’t lie – it was scary.

While continuing to work as a freelance editor and writer, I decided to use the opportunity to set up on my own as a literary agent. Having worked as an agent before, I know it can pay in the long run – but ‘in the long run’ are key words, since it’s all commission based on sales, and there are vast amounts of work involved in setting up new contacts alone. Keeping the faith that I’m doing the right thing has been hard. As if that weren't tough enough, I’ve also started trying to write a new book. And more recently I’ve been helping out at the Tilos Park information office – which pays very little, if anything at all.

And yet, I've never been happier. And since I returned to Tilos after my travels in April and May, which a friend nicely called 'island-hopping' (Rhodes-England-Australia), I've been appreciating the little things about life here that I love. Beyond the simple pleasure of being welcomed back by practically everyone I see, this week has been full of special moments. The more I get to know people on the island, the more I speak of the language, the richer life here becomes.

Michaelia looks after the ancient chapel just below my window and often stops on her way past for a chat. She’ll soon be living up at the monastery of Panteleimon for a month, she said, to help with preparations for the festival. On Friday afternoon she was on her way back from the church service on the eve of Psychosavvato, ‘Saturday of Souls’, one of three services to commemorate the dead, the previous being at the start of Lent, Apokreo. She told me to go inside and get a plate, so she could give us some kollyva, the Greek Orthodox memorial food made with sesame, sultanas, almonds and wheat berries.

That evening, Ali and I went to Sofia’s kafeneion for a drink, which turned into several thanks to the generosity of Nikos, who told Sofia so quickly to bring us beers that she’d already opened them before we could protest. He regaled us with stories of his cooking. When we’d first arrived, the kafeneion was quiet, but soon there were six men gathered around a card table, four playing and two watching. Sofia sighed and said ‘I watch but I don’t understand,’ and joined us at our table instead, telling us about the cattle she and her husband used to keep. Although people rarely milk the goats here on Tilos, she uses their own goats’ milk to make rizogalo, rice pudding, which she’d be cooking the next day. Ali, a very generous guest, went to pick some up for us.

On Saturday, arriving a little early at dance class in Livadia, I chatted with a friend called Seva – one of several Sevas on the island. She asked me where I live in Megalo Horio, and said she used to live there when she was seven. She was born in Mikro Horio, around the time when everyone started abandoning the village; when the junior school closed down in the 1960s, they had to move to Megalo Horio where the other school was. ‘They were difficult years, those,’ she said. ‘People were leaving, going to Australia and America. Boys started work early in those days, but there was no work on Tilos. So when we all finished school, my parents took us to live on Rhodes.’ 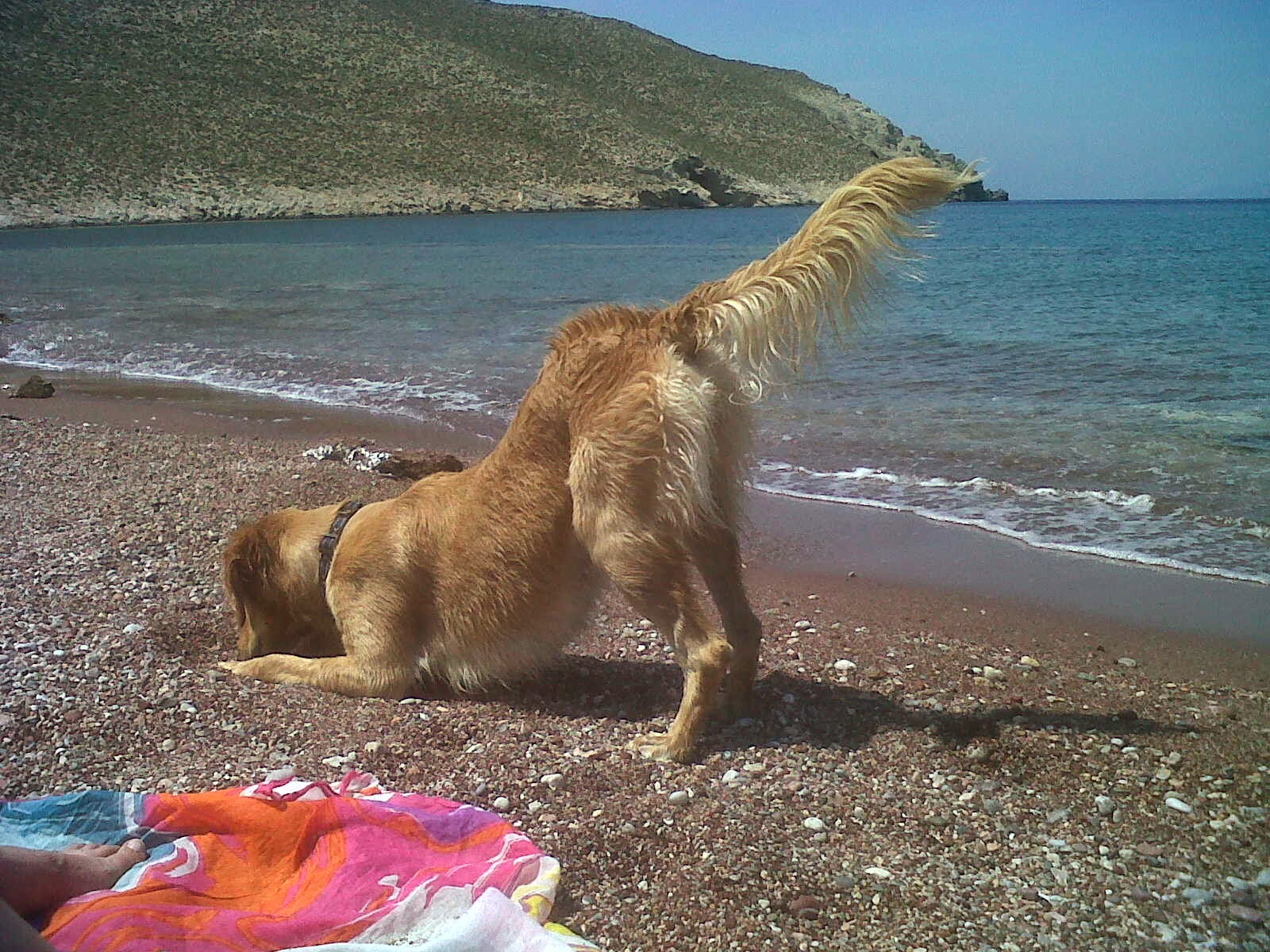 After a week of changeable weather, cool with clouds, the weather turned hot and sunny on Sunday, and Ali and I walked to Skafi beach through the green valley and spent hours in and out of the water while Lisa chased ants. In the evening, we ate once again at Kali Kardia (‘the Good Heart’), which was lively with the usual suspects from the village. We ate shrimp saganaki – shrimp in a spicy tomato sauce with feta – and souvlakia with cold white wine.

Tuesday evening after Ali left, returning home after superb kalamari and relaxing conversation at Omonia with my friend Anna, the moon was already bright over Megalo Horio. The only sounds as I walked home were the sheep, sheep’s bells, and Scops owls.

In the morning, awake early, I walked Lisa to Eristos and saw hazy sunlight pouring over the top of Amali mountain, still grey in shadow, and the dew gleaming in the tamarisk trees; while to the right, the orange and flesh-coloured cliffs already in full sunlight reflected their colours in the still water. We had the whole stretch of beach to ourselves. Along the road there and back, there were bees in the trees – the acacia and terebinth.

Lisa always stops outside Michalis’ house and wags her tail hopefully until he goes inside to get her a treat. But yesterday when I was walking alone down the seafront in Livadia, I heard ‘Ela Jenni!’ I turned around and saw Michali at a friend’s table, proffering a forkful of something, which I took and ate. Mmm, delicious. ‘Fish roe?’ I asked. ‘Yes, tuna eggs.’ Then he offered me a shot glass of raki to wash it down. ‘Make a wish,’ said his friend. 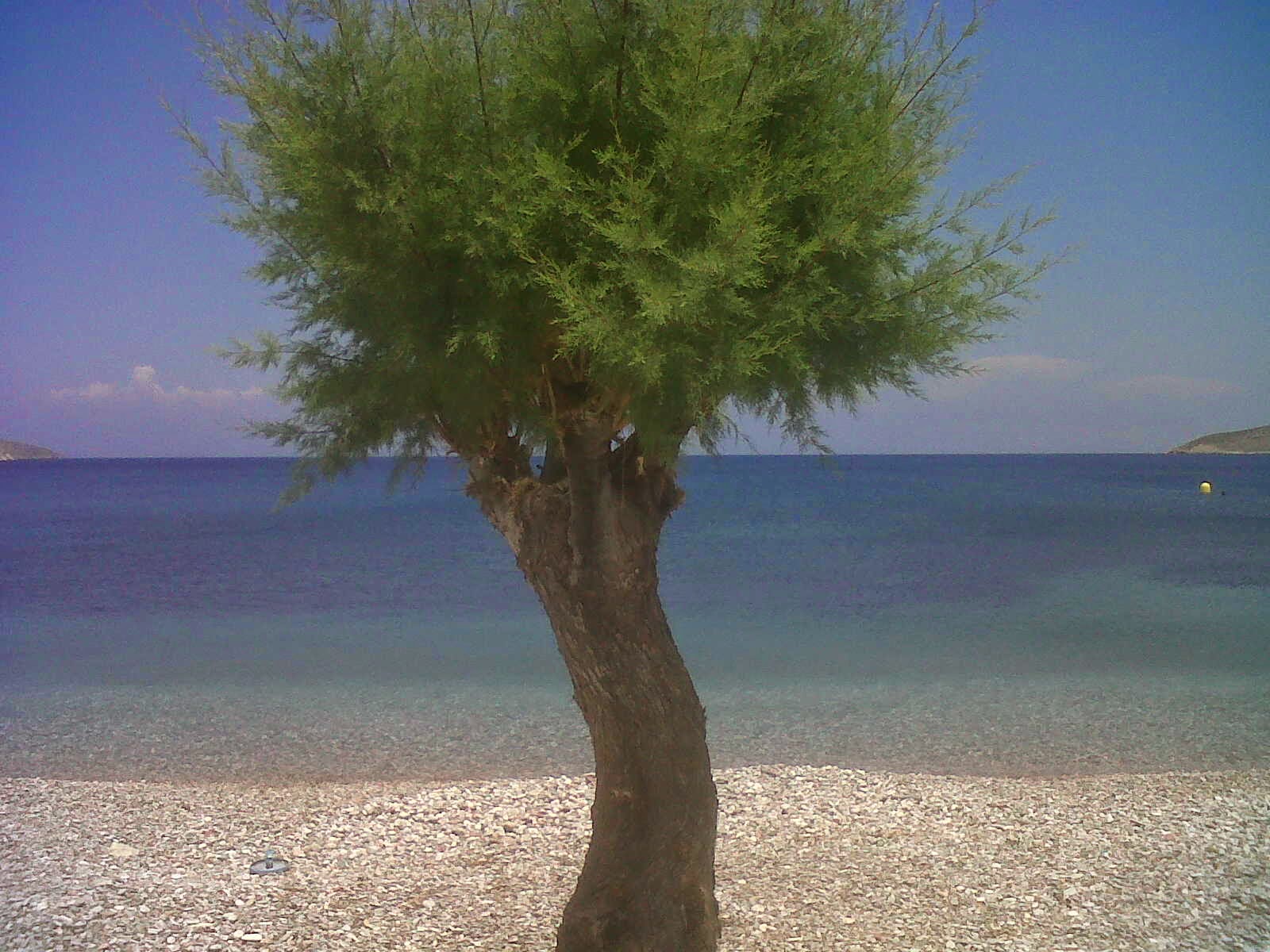 When I set out from the village in the afternoon to walk Lisa, old Polixeni with her black clothes and her walking stick shouted across the street, ‘Are you not talking to me? When I love you and respect you…’ I greeted her and she swiftly crossed the street and gently hit me with her stick.

I slowed down as I drove across the island from Megalo Horio to Livadia this morning, passing the abandoned village of Mikro Horio, and as I noticed the purple thyme flowers and pink oleander along the road, I thought again about Popi’s lovely expression about the large notes. That would be nice too, but thankfully life in Tilos is about much more than that. Some visitors to the Tilos Park office asked if living here was sometimes boring. Never. 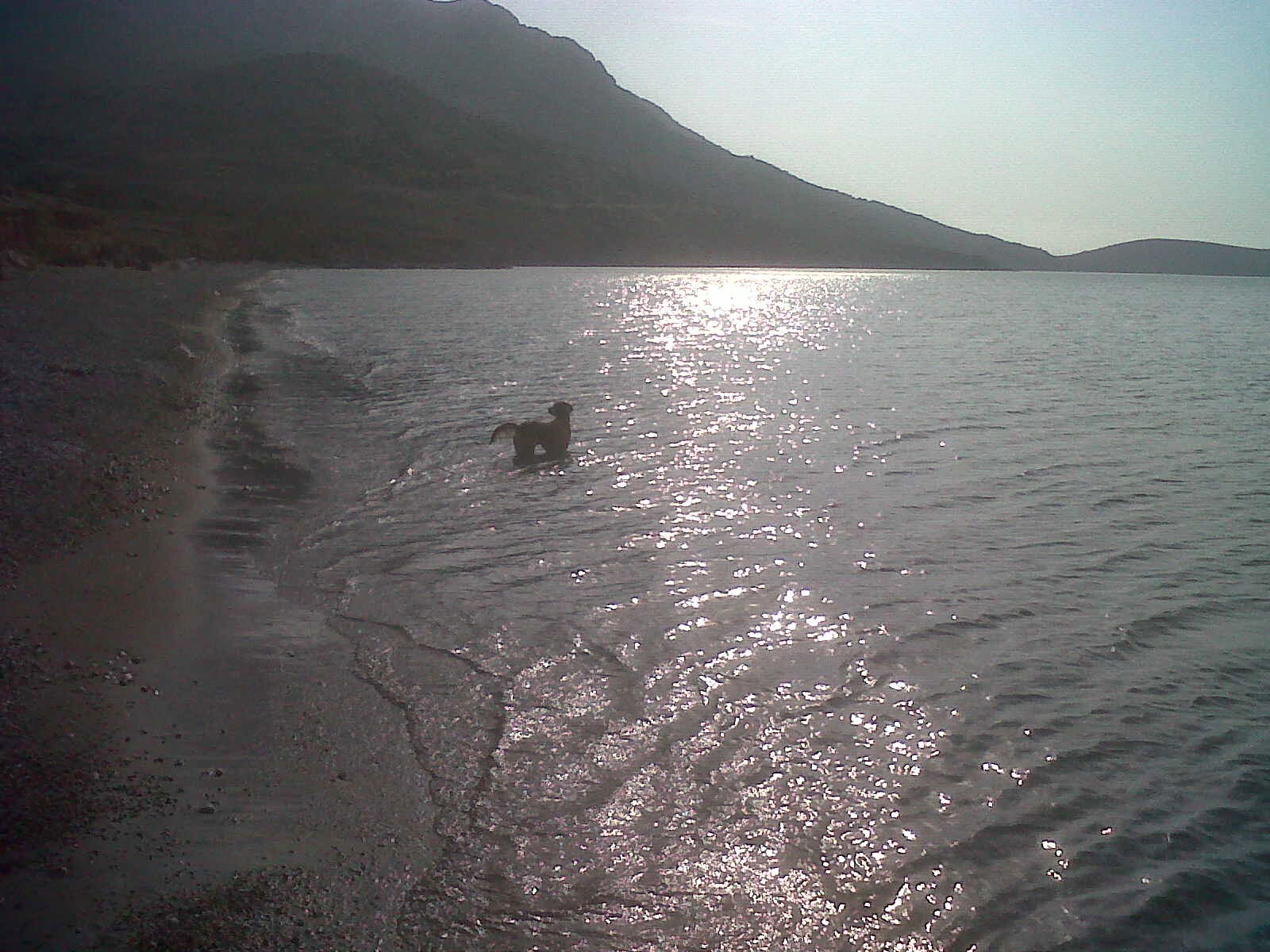