A Rendezvous in Diafani

The old Russian lady was a solid and reliable member of team Anemos last year. Strong as an ox, she carried heavy loads up and down the hills of Karpathos. Her body may be a bit the worse for wear these days, but Ms Lada Niva is a fine old girl and hardly ever gave us any trouble. 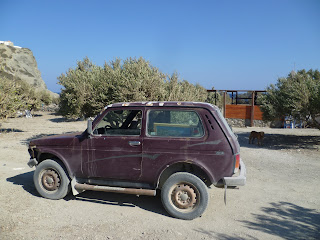 Sure, something needed to be unplugged if she was going to be left alone a few days, or the battery would be drained. But when the engine refused to start one morning and M had urgent business to deal with, he got it going using a piece of machinery that usually makes a goat rotate on the spit.
And sure, her interior was pretty rusted up too. The lack of a seriously effective hand-brake worried me when I had the time to think about it; and as I was driving downhill, the driver seat occasionally slid forward so far that my knees were bent up around the steering wheel, restricting access to important things like acceleration and braking. The back door is held up no longer by hydraulics but by a stick or a hand, and there has been the occasional misunderstanding leading to it falling on M’s head.
Every now and then one of us has insisted we need to replace the Lada, but for sentimental and cash flow reasons, we put it off and put it off. At the start of the summer, cash is thin on the ground for taverna and studios owners like M. Then ten days ago as M and I were heading to Pigadia together to shop for supplies, there was a strange rattle which turned out to be a bearing in the gearbox giving us due warning that it was getting ready to quit. The cost of replacement according to the mechanic, four hundred euros, seemed too much to spend on something held together by rust and good fortune. 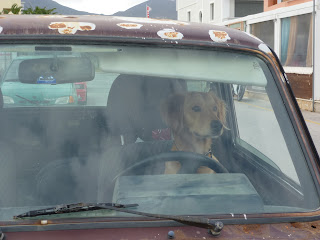 So M talked to people and hunted around online and found a very similar car for sale in Crete for an amount that was manageable with a small business loan from Barclay’s bank (i.e. me). We knew it wouldn’t be perfect, but since it was the same model as our old Lada, M could swap around some parts here or there. Ideally he would have flown the half hour to Crete to test-drive it, but flights appeared to go via Athens and cost about three times as much as a return flight to Rome, so we asked our friend Manolis in Herakleion if he could take a quick look at it. He said it seemed fine, apart from a bit of rust and a dent or two, and he could put it on the ferry he was taking to Karpathos. And so on Saturday evening, we left Lisa with a full belly and a commission to guard the nascent veggie patch from goats and hedgehogs, and took the old Lada – its gears still rattling but still going for now – to Diafani, the harbour for Olympos just a little north of here, to wait for the ferry.
The Preveli, one of just two that service the island of Karpathos, is a good old-fashioned ferry. It’s been going for plenty of years; Yiannis the former headmaster in Olympos told me it arrived reconditioned when he first came from Crete to teach at the school in Olympos, and now he’s retired… And yet it has a wonderfully dreamy route from Piraeus down to Santorini and Anafi and Milos, on to Herakleion and Sitia in Crete (I took it to Sitia a couple of years ago with Lisa) and Kasos and Karpathos and Halki (a lovely connection to Tilos) and then to Rhodes. I have fantasies of spending a year just hopping on and off the Preveli… 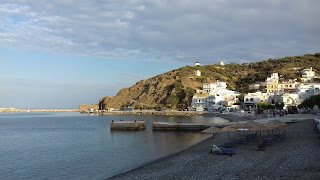 Diafani looked pretty in the early evening light. We went first to take a look around Dorana Studios, owned by a cousin of M, another Minas. He was showing off a fine mane of black hair, some of it on his head but the rest of it liberally distributed over his bare upper body. He seemed a very friend chap and had nice rooms with a view of the sea and the church and mountains, which I figured would be good to recommend to friends and family. Then we went to get a drink on the seafront at Blue.
Very soon after, summer resident Roger Jinkinson strolled by, and stopped to say hello. He was ready to partake of an ouzo next door on the little terrace of the most traditional kafeneion in Diafani. The old lady who runs it, Anna, is the only person in all north of Karpathos who sells cigarettes and tobacco when the seafront kiosk is closed, and she is very cautious about letting anyone take more than their fair share. She keeps them in a wooden cabinet in the little café, along with the chocolate. She brought Jinks his ouzo with a little bread and olives, and a figure leaned out of the door and insisted on paying for it.
I apologised to Anna for sitting on her wall so I could chat with Roger, who has written a couple of books revealing the inside minutiae of local life as he’s come to know it over decades. Among other things, he told me how the old ladies of these villages have always commanded a lot of respect because they guarded valuable information about who was related to whom, and therefore who could marry whom. 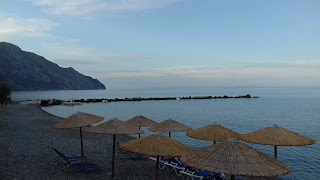 Eventually I joined M again, who was sitting with a group of local men, and I enjoyed trying to follow their conversation, even if I only caught about a third of what they were talking about. At one point, a chap with a white moustache stopped in the alley and looked at M.
‘I know you, don’t I? Are you from Olympos? You’re a Drakos from which part of the village/family? So we have the same great-grandfather and are second cousins! I knew it.’ He sat down with us, and I got the impression he now lived elsewhere but was back in the village. He asked, ‘So why do all the locks turn the wrong way here?’ I was pleased to hear it wasn’t just me having this problem. Olympos has its own rules. 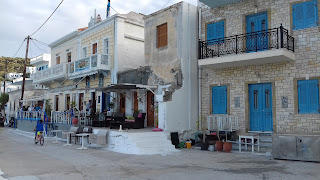 As darkness began to fall, Vasilis arrived with a just-slaughtered goat and a box of cheese in his car; cats prowled around it. A thick-set man with a no-nonsense demeanour and occasionally twinkling eyes, Vasilis used to be a plumber and now keeps goats and makes cheese and honey underneath the church at the top of the ridge from Agios Minas. He supplies us with feta-type cheese from spring onwards for salads at the taverna, and had slaughtered the goat for Manolis and his friends who were arriving from Crete. He’d keep it in his car for now, safe from cats, as the driver window of our old Lada could only be wound up using a wrench.
The Preveli should have arrived at ten past eight, but Captain Nikos said it would be sometime after nine and it showed its face sometime close to ten. We walked over to wait for the big ferry to dock. M helped someone with their bags onto the boat, then he drove off in the new/old Lada. We loaded Vasilis’ goat and a box of cheese in the back, and I had a few minutes to acquaint myself with the new old Lada before setting off up the winding road in the dark in convoy with M in the faulty old Lada and Manolis and company in his truck.
All went well, until we were driving down the dirt track that winds around the hill ridges with mountain on one side and sheer drop on the other. But I’m familiar with this route now and was appointed to drive ahead. As someone who refused to drive a car, aka death machine, for twenty years, I’ve come a long way. I was pleased to see a hare bounding around in the headlights before disappearing into the bushes. Then the lights behind me disappeared too. I paused a while, hoping everything was OK, since Manolis’ truck was big and heavily loaded and he didn’t know the bends in the road. I had visions of him misjudging a turn… There again, maybe he’d just stopped to try to catch the hare. I decided it was best for me to continue and make sure I got safely home, given that we didn’t know what problems the new old Lada might have.
I got back to the usual effusive welcome from Lisa, and waited for the other guys. And waited, and waited. Eventually, a phone call: Manolis’ truck had broken down. Which just goes to show that two rusty old Lada Nivas are still more reliable than anything else.

NEW: Podcast on The World Wanderers about my life in Greece:
http://www.theworldwanderers.com/travel-writing/jen-barclay/

REQUEST: If you've read An Octopus in my Ouzo and would be willing to write a few lines of review on Amazon (I promise you I don't read them!), it would be very helpful. Thanks!