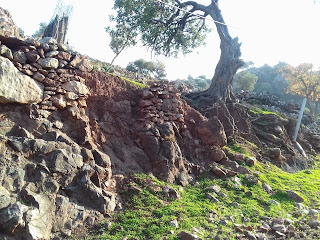 ‘Himoniatikes diakopes!’ – winter holidays – says Anna, one of the local ladies, as I pass her on the seafront. Half an hour ago I heard her shouting to a neighbour and realised she was in the sea.

‘I saw you swimming,’ I say.
‘Yes, it’s beautiful… but I have to get dressed afterwards.’ She’s now bundled up in her winter clothes. I laugh knowingly. She asks after my family.
It’s always good weather when I’m leaving Tilos for England in December. I’ve skipped one or two, but mostly I go away for a couple of weeks of work and seeing friends and family for the holidays, the yortes. 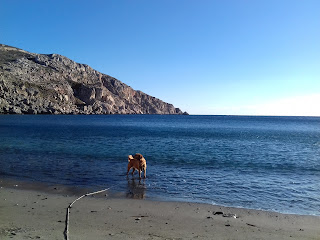 At the start of December, there were days of warm, calm weather, and balmy nights when I would step outside my apartment in the dark to see the moonlight shimmering softly on the bay.
In the early morning, I like the moment at 5.30 a.m. when the streetlight outside my bedroom window is switched off, leaving just the first of the daylight. On the 5th December it was so calm, I listened to the faint chugging of the fishing boat as the sky brightened. There was also a big cargo ship in the bay.
When I threw on some clothes and took Lisa out, I heard the cry of ‘Psaria!’ – the dulcet tones of Nikos, captain of the Sofia, announcing fish for sale. Sure enough, his truck was in the square and the fishermen enjoying a coffee at Georgos’ kafeneio. I bought a bag of marides, the small fish that are in season right now, and sat down for a coffee and a chat with Stelios while waiting for Savvas to open the post office. Georgos, handing me my Greek coffee, tutted that my black leggings were covered in dog hairs.
As I walked back home with my bag of fish, Panayiotis was sitting outside his mini-market and told me to wait while he filled a little bag with dried rosemary.
‘When you fry fish, put rosemary in for flavour.’ 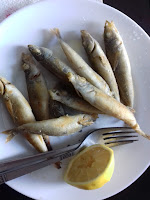 Then a freezing north wind held us in its grip for a couple of days. I had to close the wooden shutters as their metal hooks were clanking. The sea wind was howling and the waves crashing roughly on the pebbles, and there were whitecaps out beyond the bay, the horizon bumpy. Inland it might feel much warmer, but I love being so close to the sea, intensely aware of its mood. It was a good time to remember Saint Nikolaos, protector of fishermen, with his name day on 6th December. 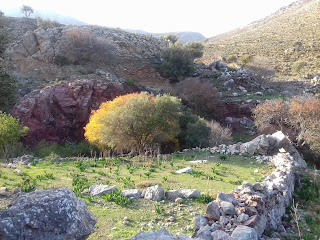 These winter days I’m busy with editing work, so a mid-morning break to buy food and treats is inevitable. Seeing the white van in the square means there will be olive oil, oranges, lemons, lettuce and spinach. And having got accustomed to making my own bread for the last few years, I’m now making the most of the bakery. Lately there have been calzouni, pastries with cheese and honey, and little syrup cakes made with tahini… All the more reason, then, to put on hiking boots and get some exercise in the early afternoon.
Lisa shakes her hairs all over the place and jumps around excitedly, nose in my face as I try to lace up my boots. It might be a walk towards Lethra for a swim, or a hike up one of the tracks behind Livadia to the ridge above, the silent high places where people lived long ago in now-abandoned stone houses. The hillsides are turning green with fresh shoots; there are acorns underfoot and autumn leaves, crocus blooming and the leaves of cyclamen appearing – their flowers something to look forward to in the coming month. After the cold wind dropped, there were two sunny days with flat clear seas and I swam, enjoying the feel of the water for the last couple of times before the end of the year. 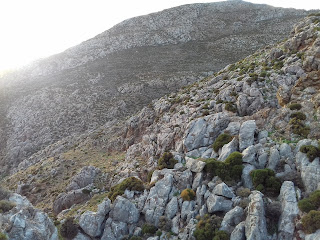 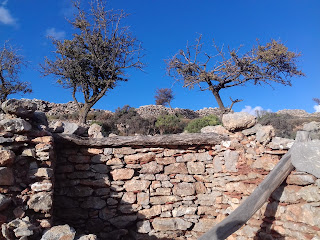 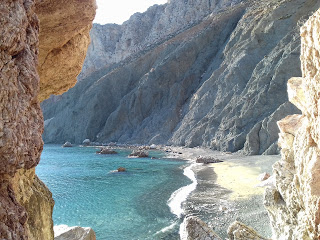 As I walked back from the red beach a couple of days ago, Ilias was outside his hotel, sweeping after the latest round of pruning of the bushes. ‘Lots of walking!’ he commented. ‘And swimming?’ I said I did – it was such a beautiful day.

‘Few people know that it’s paradise at this time of year,’ he said.
Those of us who stay for the winter – it’s only a few hundred – stay because we love it. And it is a very friendly community.
Ilias reminds me to keep my phone with me when I walk alone and remember the emergency number, 112. I thank him. 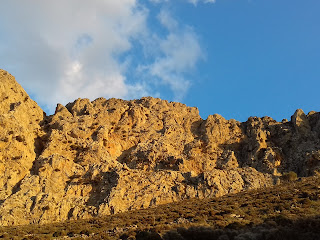 I’ve been coming and going a lot with travels in October and November – to Halki and Nisyros, to Rhodes and Athens and the Meteora. To the harbour again this morning with a bigger bag this time. And with ‘many kisses’ for my parents from Delos, who treated me to an extra glass of wine with the pork gyros and Greek salad at Kyriakos Grill last night.
‘Are you leaving?’ asked Panayiotis, standing on the dock. Just for a few weeks, I say.
He says he’s meeting his wife off the boat… but not until tomorrow. Bit early, I think.
His daughter’s living in Strasbourg and keeps inviting him but he likes to stay in Tilos and not go anywhere. ‘I tell her – I’m coming!’ Then he adds, grinning: ‘With the fishing boat….’
Once I’m up on deck, I watch him and other guys hanging around the ferry as it waits for the time to leave, joking with one another. Stelios Stefanakis walks off the ramp, laughing at something, throws down his cigarette and gets on his scooter to zip back the hundred yards to his office. That’s the signal, and the ramp starts to move.
As I sat writing this on the ferry to Rhodes, where I’m connecting to my flight, I felt a finger poking me on the shoulder and it was the priest from Megalo Horio, Papa Manolis, grinning at me and asking, ‘What are you writing now?’ 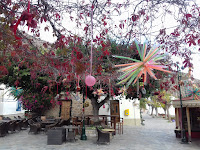 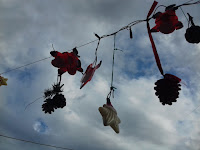 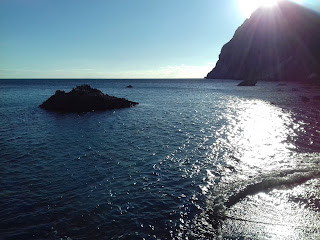