It's summer in Tilos.
Yesterday I was in the village shop, and an old lady was saying she doesn't go in the sea until summer. 'What's this?' exclaimed Rena, pointing out the door. 'It's summer!' It may be early May, but it's 28 degrees and though the water's a little cold, it's beautiful plunging into the deep blue... As I've been doing at my favourite pink sand beach since my last post.
I also know it's officially summer because the mayor of Livadia (dressed pretty cool in embroidered jeans and All Stars) told me the young kids weren't allowed to play football in the school playground before 5pm because 'kalokeriazei', it's turning to summer, and people would now be taking a siesta between 2.30 and 5. The older kids now have exams coming up anyway and the young ones just want to be outside. It's no time to be cooped up in school. 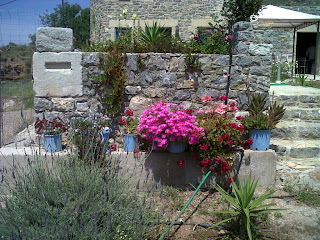 Towards the end of April, one evening just as I was ready to fall asleep (after work, swimming, teaching, then drinking a glass of wine while watching Stelios cooking little red crabs in exploding hot oil), Stelios called Georgo to wish him and Georgia 'Khronia Polla' for their name day, and they invited us over. I had no energy to go out - I should have had a midday sleep myself. But it was fantastic: a big friendly gathering at which Georgia celebrated her name day by working non-stop to keep everyone supplied with plates of wonderful roasted goat, cheese pie, salads and then cheesecake. The youngest family member, Antonis, was already asleep covered in coats on the couch, while the oldest was well into a bottle of Cutty Sark. 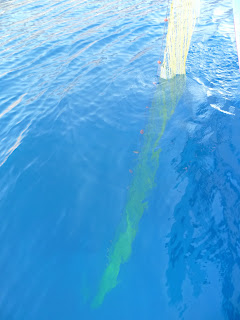 Next morning, we were up at 4.30 a.m. Stelios had agreed to take me out on the fishing boat. As we left behind the lights of the village, there was a dark sky full of bright stars above. A faint glimmer of reddish light on the horizon showed where day was on its way. It was calm, the sea rippling lightly. Then suddenly I spotted a pod of dolphins - within moments they were leaping in front of the boat, silhouetted against the silver-grey sea. 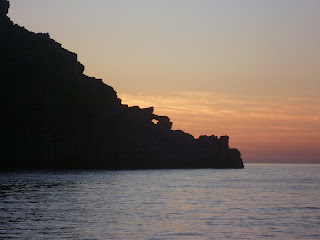 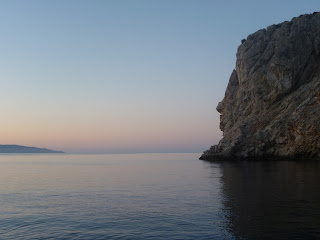 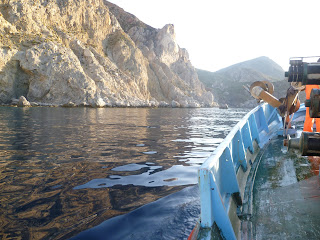 We went south round the sheer steep cliffs to Ayio Sergi, past the deserted rocky islet of Antitilos. They caught two sinagrithes – king of fish - one of them weighing four kilos. There were melanouria, and the small tuna called palamithes, and lobsters.
Not many fish, as a couple of nets were attacked by a seal, which we saw rolling around in the water, but enough to make it worthwhile. For me, the best part was being allowed to steer the boat for a while - a bit terrifying when close to the cliffs. My reward was a fouska, also called spinialo, a bit like an oyster (perhaps a kind of sea squirt) with soft yellow flesh that tastes like the sea.
A few days later, they caught 40 kilos of melanouria, and another day 500 tunas. 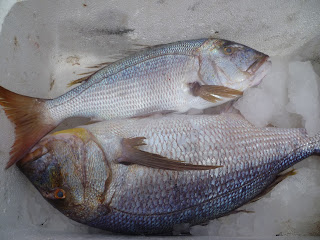 We had a week or two when the power went off for about an hour twice a day. No fun when Stelios has to get up at four in the morning and get ready to go out on the boat all morning, and there's no power for a coffee. But we seem to be back to normal. Ktipa xilo, touch wood.
Then it was Protomayia, First of May, also a sign that summer is beginning, as were the first oleander flowers blooming; and the Ayia Irini festival,with dancing in the afternoon down in Eristos valley - all reminding me that I've been living here for a year now. 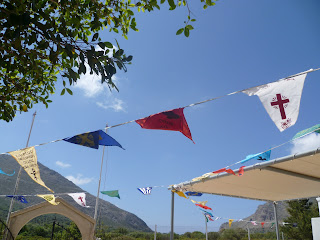 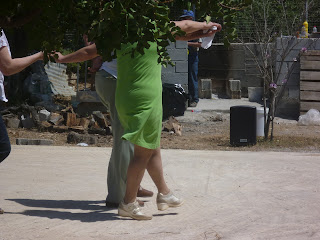 Now that I've been writing notes on this blog for a year, I've started to receive messages from people who've found it, maybe looking for information on Tilos. I picked up a couple of walkers the other day and gave them a lift into Livadia, and when we got chatting, the English man said: 'Have I been reading your blog?' I've met a woman who used to be the rep for Laskarina here. And someone who was at a football match I went to last year, who sent me a wonderful message saying:

'One of the many things my regular visits to Greece has helped me to learn is that the "simple life" is very good indeed. Trouble is too many folk think you can only get it in Greece but if you try it is quite possible (if not always easy) to live the simple life back home too.'

Beautifully put. Some things, of course, are only Normal for Tilos. Stelios assures me that everyone makes barbecues out of old hot water tanks in Tilos: 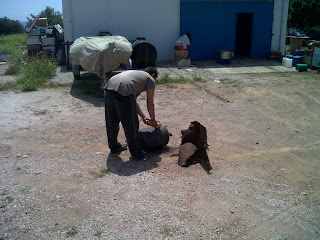 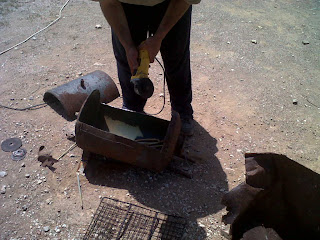 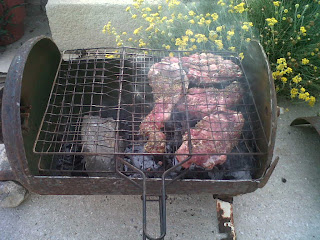 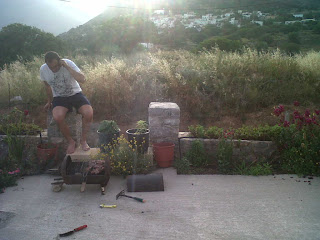 I've been endlessly confused recently between tha psisoume (we’ll grill meat - what you do with a barbecue) and tha psifisoume (we’ll vote). The elections happened here on Sunday, and Tilos was busy with people coming back home to vote. Funny, if voting was on a Sunday in May in the UK, how many people would do it, and how many would be on a cheap break to somewhere in Europe...?
The voting has sent a strong message that ordinary people are unhappy with being made to give up their future and their pensions for what their government has allowed to happen. (Last night I heard of a young locum doctor who is now on 500 euros a month, not enough to feed his family, and will have to look for work abroad...) There's much talk of France also saying they've had enough of their arrangement with Europe. Exciting times... Thankfully, not nearly as exciting here as the British newspapers seem to convey. Life goes on as normal in Tilos. 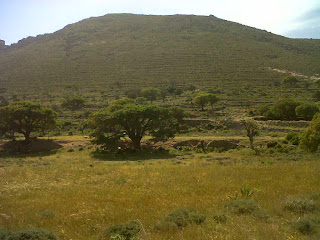 Finally, Eleftheria invited me to look around the studios she has overlooking the bay in Livadia last week, so I could help her create a text in English for prospective customers looking for more information. The studios are in a quiet part of the village, but only five minutes walk from the beach, with a spectacular view, and are good value, so if you're looking for a place to stay, they are worth checking out: http://www.michalis-studios.gr/ 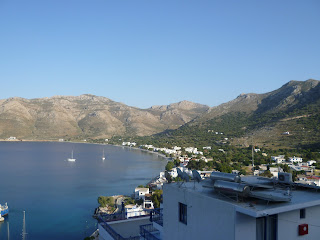 I always start these blogs thinking this should be a quick one as I haven't been doing much, and not much happens on Tilos... Right?