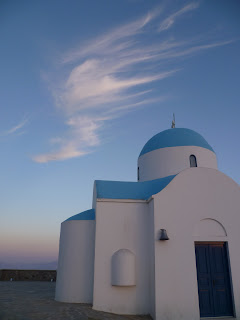 On a windy evening I was on the island of Nisyros, standing beside a tiny, surreally perfect blue and white chapel high above the village of Nikia, surrounded by warm orange light as the sun went down. I heard a cow somewhere below on the slopes towards the sea, or in the caldera of the volcano. The wind was cool, so after I'd descended the steps and Yiannis finished taking photographs, he suggested a shot of tsipouro for the road at the restaurant where we'd parked the bike. I drank it and walked out to see a full moon, bright and yellow, against a dusky blue sky.
My Greek friend Yiannis is a photographer, but he also has a day job, from which he had two weeks’ holiday. Since I get a chance to write about Greek islands a couple of times a year for a newspaper or magazine, I need to keep exploring them. I am deliriously happy to be back home on Tilos, but June is a good time to travel. We cooked up a plan to spend a few days in neighbouring Nisyros (an hour away by ferry), be back in Tilos for Yianni to open his Home Gallery on the weekend, then take a longer trip to Kastellorizo. Friends had agreed to look after Lisa; Yiannis had gently reminded me that we could take her but we wouldn’t get to do as many things - I’d told him about a disastrous time when I’d had to take her along to Crete.
We rented a scooter on arrival in Nisyros that lunchtime, after dropping stuff at the hotel (Three Brothers, at the port). Twenty minutes later, up a winding road and on a bumpy, rocky, pot-holed track, I remembered I get terrified on the back of a scooter when I’m out of practice. ‘Er, do you mind if I walk?!’ I asked, feeling like an idiot. What a start to the trip. But it turned out to suit both of us, as he’d be stopping often to take photos. 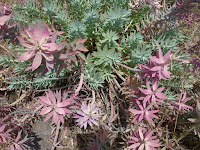 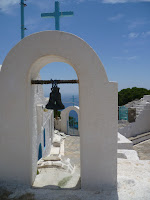 And so, the scooter bumped along ahead and I wandered slowly and happily along a track I’d explored before, looking at spiky plants with dusty-pink flowers, poking my nose into a chapel built into the rock. As he photographed an old tree, I walked up a slope and found the remains of a house with a threshing circle and cistern and vaulted stone rooms, overlooking the centre of the volcano. Further along, I visited the little monastery of Stavros, finally descending towards the volcanic craters, reaching a white and yellow point on the path where I caught for the first time the earthy sulphur smell from the fumaroles that always makes me feel close to something mysterious and deep. 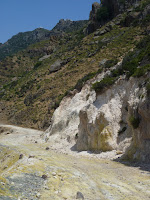 Veering off to one of the smaller craters, I spent half an hour just poking around another deserted farm with its stone walls and threshing circle. Yiannis wondered what had happened to me – there’s no phone signal within the caldera. I studied the shapes and the colours on a slope – tinges of green and orange and pink – as the wind caught the rising steam. The centre of the volcano felt peaceful and otherworldly.

Because it’s a unique place, though, coachloads of daytrippers can present a bit of a problem. Suddenly I heard a noise and spotted not one but two – no, three – coaches coming down the road in the distance. People would be here soon.
Stephanos crater is a vast white sunken circle streaked with yellow and grey, with steep walls and a flat, cracked mud floor punctuated by a cluster of blow-holes. Around the edges of the crater, bright yellow openings release hot vapour, rising in wisps as if to inspire the oracle. I knelt close to listen to the hissing and gurgling within, and was momentarily blinded by the steam on my sunglasses. 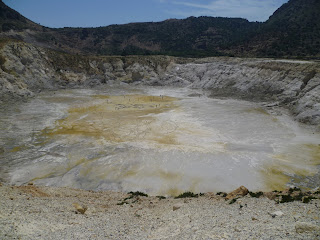 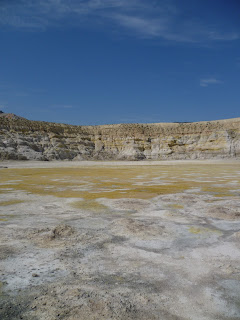 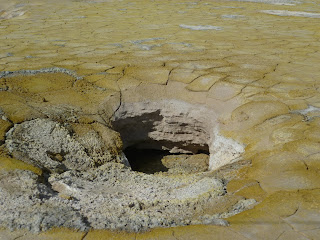 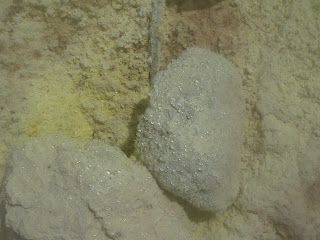 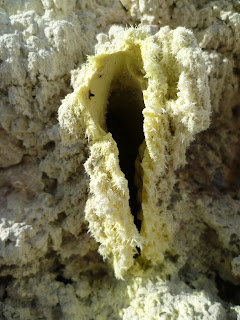 Soon, I overheard two English women, talking about volcano experiences they’d had. Apparently at one, they cook you food over the heat. ‘Oh yes, I’ve done that,’ said the other. Why do some people travel in a way that makes them jaded?
We drove away, up to the rim of the caldera and then around towards Nikia where we saw the rugged north-facing cliffs of Tilos across the sea: over there, a cloud hung above the mountain where I knew the monastery of Ayios Panteleimonas was. Here we took a little road downhill, past abandoned stone houses and wandering cows, and found ourselves at another church of Ayios Panteleimonas. Steps led down to a cove of jagged and pocked black lava. This was Avlaki; I’d seen photos of it in the volcano museum on my last trip. Somewhere in the waters below, hot springs bubbled up.
A few once-genteel buildings now stood beautifully desolate around a small harbour, their plaster crumbled away and their balconies rusting, returning to the natural grey and red stone. I was mesmerised, thinking of the stories that might be unearthed of this place; maybe I'd just inhaled too much sulphur. I went for a swim off the jetty to wash off the dust of the road, while Yiannis took a photograph of water spilling over rocks. High above us at the top of the hill, the sides of buildings were lit by late afternoon sunlight.
I was getting used to the scooter, and grinned as I admitted that we wouldn’t have done nearly so much without it. Later, after sunset at Nikia, we drove back up and along the caldera’s rim to the half-dilapidated village of Emborio, where cats leapt across the alley from one roof to another.
Next day, we found the Roman shrine of Panayia Thermiani, and continued along the coast via Cape Katsounis to see the layers of volcanic eruptions in the cliffs: then at the end of the road we left the scooter and walked around the cliffs to Pachia Ammos, where the grey, red and white of Nisyros rock merge to form sand that looks chocolate-brown, and behind the dunes are lavender bushes and olives – perhaps once there were farms. 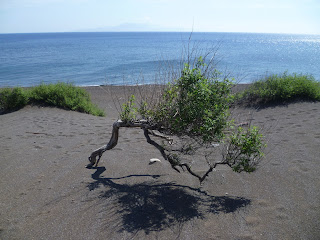 Nisyros felt wild and natural and abandoned. A man we met at lunchtime at the lovely meze restaurant at Loutra said, ‘In old times, people made things. Now we break them.’ But it’s a wild abandon full of beauty and colour. 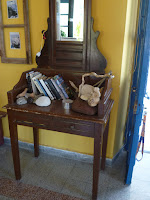 Yiannis had compiled clever itineraries to make the most of our short trip. One of the books mentioned a ruined castle at Parletia, but it wasn’t marked on the basic map we had. The lady in the restaurant kitchen at Nikia said we’d find it, and pointed us in the right direction. We walked along a rough and overgrown path, losing our way a couple of times in the scrub as it seemed to peter out, scrambling down gravelly sections, resolving a couple of times just to keep going to see what was around the next outcrop of rock. Eventually we found some broken walls on a very steep lava neck with fantastic views from the top, and decided that was it. Heading back to Nikia, I realised I was starving, and at that moment a group of piglets launched themselves down the hill, squealing.
We’d been out at dawn – optimal photography hour – and now it was late afternoon were getting tired. ‘Let’s go to the sauna?’ suggested Yiannis. I’d pointed it out to him at the entrance to the village of Emborio, a tiny cave where hot steam rose up naturally out of the rock. Yiannis thought we should change into swimsuits to make the most of it. Laughing, we stuffed clothes into the bag and parked the scooter across the entrance. We sat inside on a stone bench, surrounded by green rocks, feeling around for the hottest steam vents, relaxing in the peace.
I heard a coach pass by on the road outside. And then it stopped. We peered out, and the people in the coach waved. They all trooped out... Time to throw clothes on, and get back on the bike. 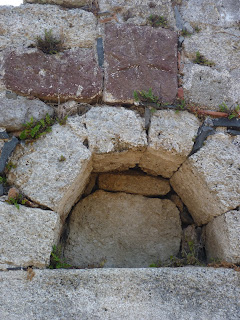 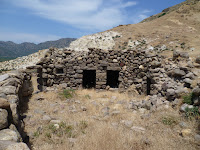 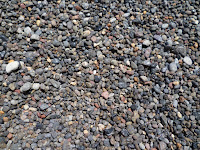 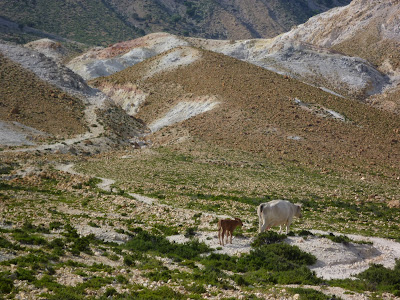 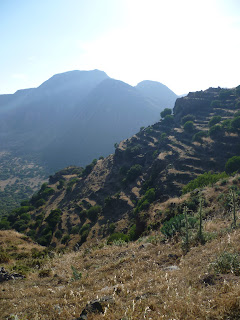 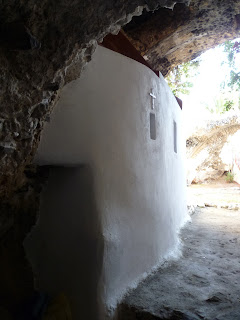 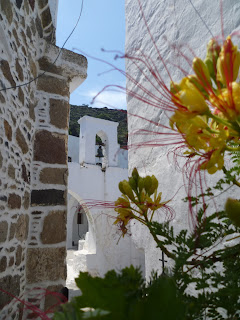 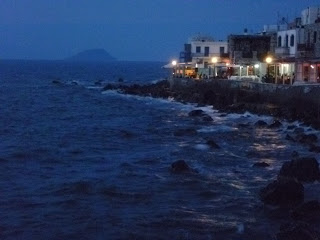 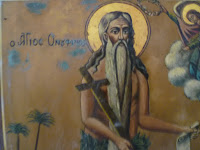