RHODES INSIDE GUIDE (a few of my favourite things) 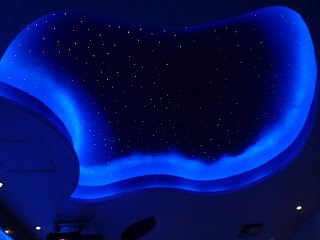 The biggest island in the Dodecanese, Rhodes has superb beaches, a relaxed café culture, pine-covered hills and valleys of fruit and olive trees. In the sunny southeastern Aegean, so far from the Greek mainland that the mountains of Turkey appear a stone’s throw away, the capital at the tip of the island is circled by deep blue sea and its Old Town has medieval walls built by crusaders, tumbledown classical remains and alleys overhung with bougainvillaea. Here are a few of my favourite things.
(Wrote this for a magazine but they couldn’t use it; so I thought I’d post it here. Big thanks to Anna for her help!) 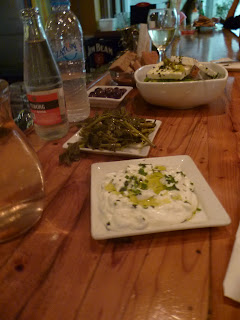 As it’s stuck between the buses and excursion boats taking people off to resorts for the day, finding this hidden taverna means running the gauntlet of the touts luring in visitors to trashy eateries with 2-euro beers. But classy Kafeneion I Agora opened up to reclaim the New Market area for locals, and it gets packed to the gills with Greeks, especially on live music nights. Find a seat at the bar and watch the lively open kitchen produce simple food with a modern twist: squid ink risotto, stuffed vine leaves.
New Market, Mandraki Harbour. Open for lunch and dinner all year round; live music on Tuesdays and Saturdays in summer. 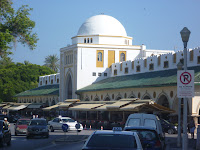 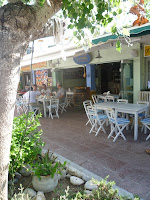 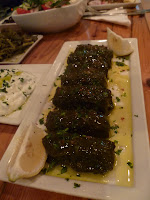 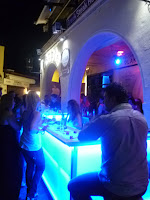 For nightlife in Rhodes town, nothing beats Fuego – as you’ll see from the packed alleys all around the courtyard where the DJ spins the year’s Greek and European favourites. Locals love to see and be seen from 11p.m. onwards at open air music bars from Soho to Apenanti to the newly opened Apple (where I took most of these photos), while Legends Rock Bar caters to a less mainstream crowd. Avoid the Old Town’s daytime crowds and meander its transformed backstreets from dusk. There’s no entry fee so grab a mojito and join the outdoor party. Just make sure you can find your way home…
Fuego: 4 Evripidou Street, Old Town. Start at Ippokratous Square and wander away from the sea. Friday and Saturday all year; nightly July and August. Legends open nightly all year. http://www.rodosnightlife.com/fuego-plus-music-bar 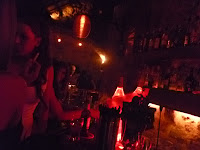 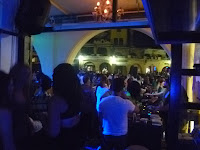 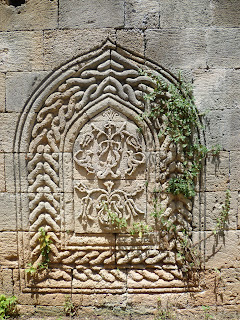 Assuming you’ve already taken in the superb Archaeological Museum and the Palace of the Grand Masters, Papakonstandis Mansion dating from 1626 is an example of culture unique to Rhodes. In spectacular Lindos village, an hour’s drive from Rhodes town, dodge the donkeys taking tourists up to the Acropolis and the increasingly popular weddings at St Paul’s bay. Lindos was famous for seafaring from pre-Classical Greece to Ottoman Turk days, and its Captains’ houses have pebble-mosaic courtyards hidden behind thick walls for cool privacy, and décor reflecting the East-meets-West culture in Byzantine, Knights Hospitaller and Arabesque designs.
Lindos town; information tel: 22440-31613. Open year round but call for hours. 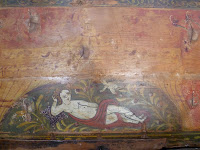 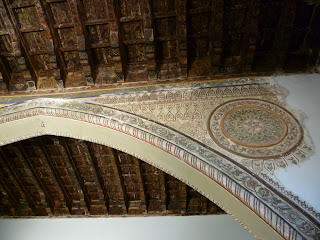 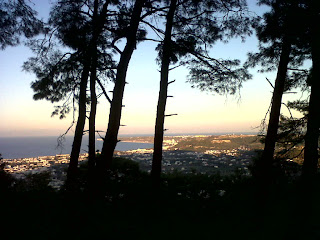 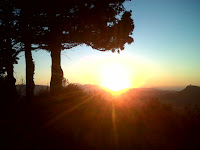 Spend the morning or afternoon in pine forest at Filerimos (10km from Rhodes town). At the top is a monastery frequented by peacocks.
Filerimos Hill, near Trianda (Ialysos); monastery open from 8 am to 8 pm Tuesday to Friday and 8.30 am to 3pm Saturday to Monday. Bus 13 (Ixia/Ialysos) leaves from the New Market regularly. 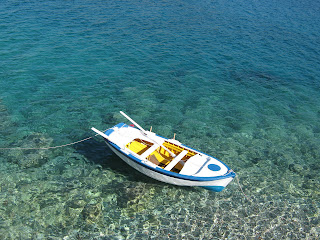 Take a trip to an island known for tranquillity: Tilos, less than two hours away, with a permanent population of 400 but considerably more goats. The ferry will drop you at the port of Livadia; at beaches around the island you can swim in crystal clear water and lunch on local fish. A few miles away is the island’s spectacularly located monastery, once a temple to Poseidon; and in the pretty whitewashed village of Megalo Horio, a museum of the dwarf elephants whose bones were found in a nearby cave.
Tilos: www.tilos.gr. Ferry schedules at www.tilos-travel.com. Tickets arranged through agents near the port in Rhodes town; check early as a day trip isn’t available every day, though overnight accommodation is plentiful. 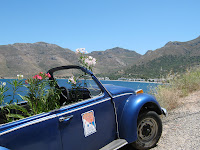 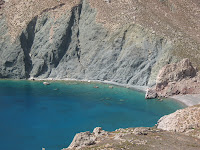 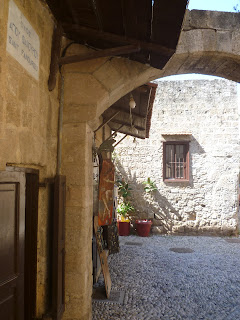 Halfway down the alley of Agiou Fanouriou off the pedestrian street of Sokratous is Marika’s Dream Folk Art Creations, with a fantastical collection of hand-made blown glass lamps and goblets for candles. Shop for a one-of-a-kind gift created by two brothers (one in Rhodes and one in Crete), selling their craftsmanship on this spot for over fifteen years. The bronze is made from fired sand with Greek designs, and the bubbly cracked-glass effects, subtle colours and swirling shapes are magical – as international comments agree in the visitors’ book.
Agiou Fanouriou 16, Old Town. Tel: 0030-22410-25425 www.blown-glass-rhodes.com 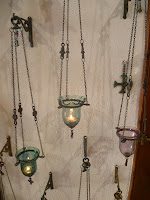 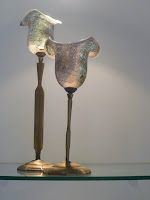