Spring around the Corner... 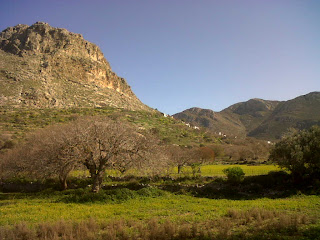 This past Sunday, March 25, was the day Greece celebrates its revolution in the early nineteenth century against the Turkish occupation, the beginning of freedom after more than three centuries of Ottoman rule. In the primary school on Friday, the desks had been moved out of the classroom so the kids could rehearse their performance, and there were Greek flags and a blue banner with 'Freedom or Death!' and other heroic words.
When I arrived to teach English, the little kids wanted to do the lesson sitting cross-legged on the floor, so we did and it was great – sitting closer to the loveable little terrors, I was finally able to read to them from the wonderful picture book I found called ‘Aaargh, Spider!’ They loved it, and I wish I had more English story books for them that worked for teaching English.
On the subject of books, it's a shame that an ordinary paperback book - not academic, just something like Dan Brown in translation - costs from 16 to 24 euros in Greece... If you think of the average salary (recently qualified teachers are now, after the austerity measures, on something like 600 euros a month), you wonder how anyone can afford to read! Plus it recently occurred to me that we don't have a library on Tilos... The school has one, apparently, but libraries shouldn't feel like going to school. 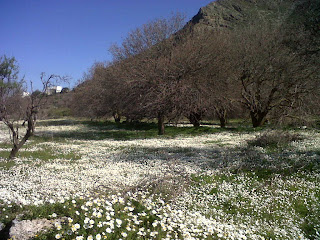 I feel honoured that my first winter in Tilos was the coldest and longest in most people’s memory… No, not that cold - the white in the picture above is blossom, not snow!
Still, March has answered my prayers and brought beautiful warmth and sunshine. In the last few days I had my first swims of the year – cold, brief, but energising and wonderful. On Sunday, I walked down to Eristos beach again to my little sheltered spot but didn’t take swimming gear because it was cloudy and a little cool when I left. Of course, when I got down there it warmed up and I so wanted to go in the water. I thought about going in au naturel, since there was no-one about and I was hidden…  Just as well I didn’t, as Eleftheria arrived with her husband and their little boy, as well as Leo, who is not only one of my students in the older English class but gets a lift home with me afterwards to the village. He’d have been put off English for life seeing the Kyria, Miss Jennifer, emerging starkers from the sea.

I also did aerobics with the local group and it was great fun to dance to loud music again, stretch and feel the joys of spring arriving. Thanks to the international language that is aerobics, I actually knew what I was doing – it's perhaps the first time I’ve been in a group of women in Tilos and not felt like an idiot. Hurrah for aerobics. 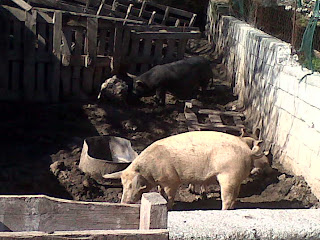 (Not incidental picture of a pig... Me pre-aerobics)
Warm weather brings out the lizards… Little ones that skitter across the path, feet barely touching the ground, and the bigger one, the savra (or mini-dinosaur) that lounges on the stone wall in the sunshine; when I change down into first gear to drive up the steep rally-drive dirt track to my house, I am just in time to see him trying to disappear into a crack in the stones - though in fact all he does is stick his head into the crack in the stones and leave his big stripey tail hanging out. 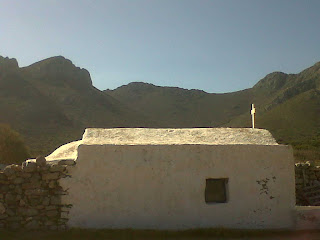 I don't want to dwell on sadness, but I cannot let March go by without mention of the sad passing of Tilos' mayor of many years, Tasos Aliferis. He came here as a doctor and gradually helped shape the life of this island through his vision and hard work. (Famously, he permitted the first gay wedding in Greece to happen here a few years ago, although it was later annulled by the government; one of Tilos's many challenges to the Greek government, such as its hunting ban that went against the national constitution!) Aliferis was a true friend of Tilos.
It came too soon after another tragedy, the passing of another great friend of so many, Vangelis Papadopoulos, known to many visitors who return to Tilos year after year as 'Zorba' for the restaurant he used to run. He was one of the first people I got to know when I first visited Tilos, and his love of life and good humour was infectious. He wanted to keep alive the old traditions of the island, and yet he also loved all the foreigners and outsiders who returned to Tilos and made their home here, bringing new life to the island. It's hard to believe he's not still here, but I know his spirit will live on in everyone who remembers him with warmth. 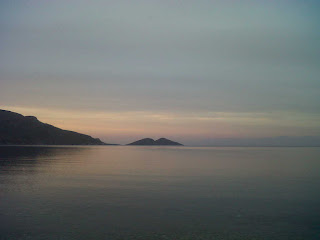 Teenafto? What’s this? Asks Stelios as I am cooking what will turn out to be the tastiest omelette ever as I am ravenous after aerobics: very fresh eggs, a little milk, feta sprinkled all over it and a little sea salt and pepper. Sometimes the simplest things… But he's not talking about the omelette, he's talking about -
'Afto? That? Ah, that you won’t like at all! It’s something that only people who grew up in England can like – and some of them don’t like it either… You won’t like it!’ It is, of course, a jar of Marmite. I usually hide it away somewhere, but there it is beside the toaster, and Stelios looks intent on tasting it…
‘It’s kind of like yeast, that you make bread with, and it has lots of vitamins in it...’ I’m trying to justify my weird taste.
But he tastes a little on a spoon and doesn’t mind it. What's happening to us?!
I’m also boiling the new shoots of the vrouves, basically edible weeds or horta, which Maria gathered for me from around the honey factory yesterday and left on the chair outside. They're a little spicy and go perfectly with eggs. I’d love to have taken a photo of dinner, but alas, the tastiest meals often get eaten before I remember the camera.
Last week when we were in Athens I kept wanting to photograph the great meals but by the time I remembered, it was too late. Still, there was plenty of other stuff to photograph, with four hours in the Cycladic Art Museum, mouth-watering shops and cool street art, oh, and the Acropolis just up the road... The trip was mostly holiday but also a little research for an article for Skyscanner, out today. If you are ever looking for the perfect place to stay in Athens, look no further than O&B, with all this on the doorstep... 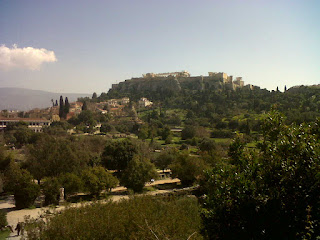 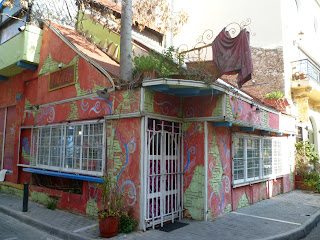 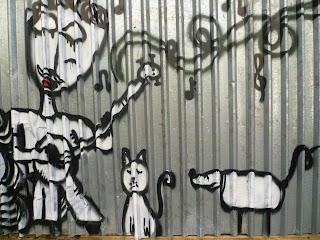 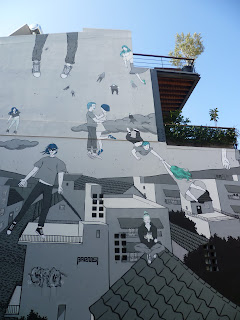 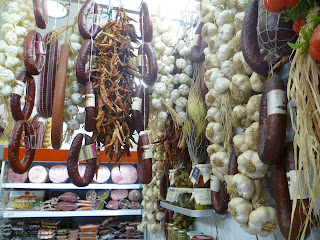 Letter to the month of March

I hope you're looking forward to your time in Tilos. We can't wait to have you here. If possible, please could you bring us some warm days (we had a couple in February and they were lovely, but it would be great to have some more!). Don't bother bringing any rain that floods the roads or freezing cold wind that whips up the sea into the air, or any of that thunder and lightning stuff - we had loads of it in February and to be honest we're a bit sick of it... I don't have any more jumpers and socks to put on. Moreover, Stelios hasn't been able to go fishing for a week and he's getting far too good at playing biriba and doing things like buying 30 litres of fresh olive oil which he then tries to decant into small bottles while I'm trying to have a serious conversation with my office.

Also, March, if you see any boats on the way, could you ask them to come to Tilos please and bring some meat and veg with them - oh, and the books I ordered weeks ago from Amazon? With all that cold weather I've been getting through quite a lot of reading.

Sorry you missed Kathari Deftera, but I guess you always do - you always come in Lent, between Clean Monday and Easter, and miss all the fun. Stelios and I went to eat lunch with a dozen friends, and for once I was quite grateful for a rainstorm in the morning as it meant we didn't have to drive up the treacherous road to Ayios Panteleimonas for it - I always have visions of one tiny slip of the steering wheel thanks to a rockslide and it's hasta la very sheer and very high cliff into the sea. Instead we celebrated indoors, and everyone brought mounds of seafood - crab legs, shellfish, taramasalata, kalamaria and of course lovely octopus - as well as bean salads and chick pea fritters and homemade semolina halva for dessert. Pretty much any foodstuff that isn't meat. The idea is to go out and fly kites afterwards, but most people just felt like collapsing. It felt like Christmas Day. I came back home and had to work for five hours, but at least I didn't have to break to make any snacks.

Well, here are some photos from the days when I did manage to get outside recently. There may come a time when I tire of sunny days walking to Eristos or Skafi, but I can't see it coming any time soon. Looking forward to seeing you, March! 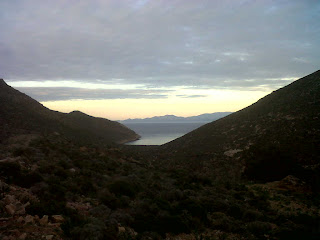 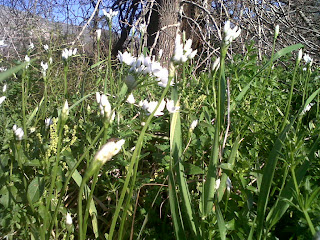 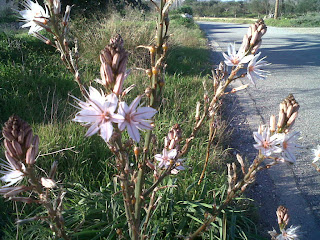 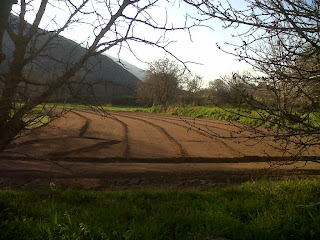 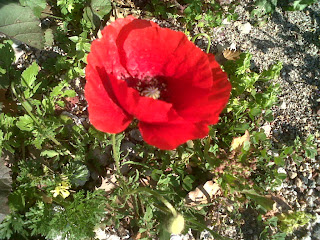 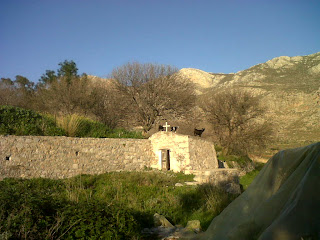