Happy Holidays to All... from the Octopus in my Ouzo 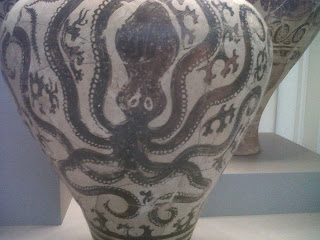 It was raining yesterday morning. Poor Mr Fisherman was out the door at 5 a.m., but I eventually got back to sleep for a couple of hours, then after Lisa had snuggled up for her morning strokes, I donned many layers of clothes and took her for a short morning walk down towards the Skafi valley, inhaling all the wonderful aromas of drenched herbs and grasses on the hillside. I'm so lucky here - as soon as I reach the end of our little alley, I'm surrounded by countryside.

This season in Tilos is so very different from winter in northern Europe. Autumnal reddish or yellowish brown leaves adorn some of the trees but the fields are carpeted with the brilliant green of new grass, dotted here and there with yellow wildflowers. In the village, roses are in full bloom, pink blossoms are out, bougainvillaea still splashes its magenta against the sky, the trees are bursting with ripe oranges and lemons and the whitewashed alleys shine after the rain.

So there's not so much need for artificial Christmas decorations to brighten things up. But friends in England have been asking if I'm ready for Christmas, so I hunted around for anything that might do. Luckily I'd purchased some cute Christmas tree cookies from Karen after her baking extravaganza for the bazaar to raise money for the school, so we now have a couple of Christmas tree cookies, hung up with red cord that I believe I stripped last year from an old tent. And I put together a few green branches and sprigs of pungent herbs to hang over the fireplace - yes, we now have a real fire. And at least Lisa has her Christmas-red collar.

It turns out we have a neighbour to the left of our house, in the house I thought was empty. It's owned by a man from Crete, who makes amazing pottery and has restored an old village house very beautifully, though he only has time to visit for a couple of weeks a year. While I was in the shower, Menelaus - he of the many goats and sheep in the Skafi valley - shouted me to come and join them next door, which is where Stelios had already disappeared. Living in the village, I've learned you have to get used to this shouting business. Usually they're shouting 'Stelio!' to ask if he's got any fish for them, but for once someone was shouting for me. So I got dressed sharpish.

When I arrived, two enormous containers of souma and raki were conspicuous on the table. Stelios fried some tender and tasty kalamaria, and Menelaus cut them up into a salad with onion, lettuce, garlic, oil and balsamic vinegar. A finer meze I have not tasted anywhere, and to make up for not drinking I polished off plate after plate of the stuff. Stelios, in true form, kept insisting to poor Kostas that he was sure he'd never eaten such kalamari in his life before. But actually Kostas said it's true, the kalamari was better than any he can usually buy in Rethymnon. Anyway, I made up some excuse about not being able to drink because I was taking tablets - a plausible excuse, as Greeks are often taking tablets for something or other - and I escaped early from what could have been a messy, though enjoyable night.

The rain has stopped and the sun is coming out again. I've seen eagles - some quite close up - every day since we got back, and a heron. And the light on the mountains makes me stop and sigh. 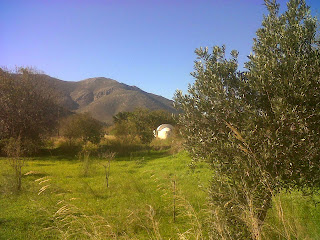 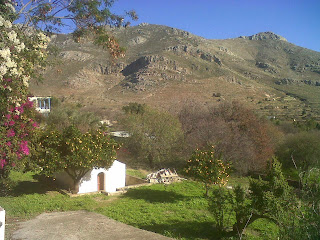 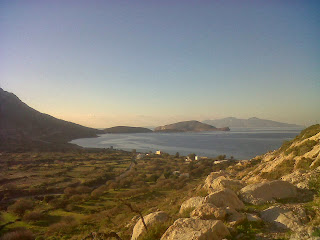 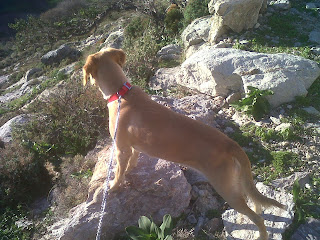 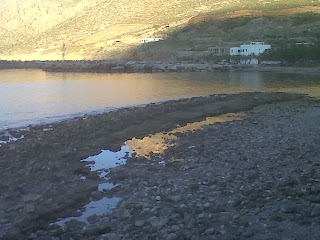 Before I sign off, I have happy Falling in Honey news. Where to start, in fact? Firstly, the Canadian distributor, Raincoast, sent a galley off to Chatelaine magazine and the books editor named it as her #FridayReads on Twitter last week. It's also been confirmed that the magazine will be featuring the book in their April 2014 issue.

Meanwhile, the US publisher Sourcebooks came up with a snazzy new cover - which I admit has taken me a while to get used to as I loved their previous cover concept so much, but now I'm loving this one just as much... 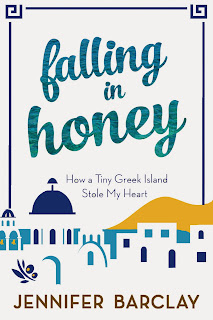 Plus, Barnes and Noble are going to be promoting the book on their new arrivals trade paperback table for two weeks in March. And finally, my agent emailed with the news that Bulgarian publisher Sluntse has made an offer for Bulgarian rights - wowsa!!!

Thanks to everyone who got in touch after the Daily Mail article too (there's a link on the Falling in Honey page); I know enough about DM Femail to know that you *never* read the comments as online readers love to write nasty things, so I didn't even glance at them; for me it was an important topic to write about, and I was moved by the number of kind strangers who contacted me offering support and advice and their own stories.

Wishing everyone, new friends and old, very Happy Holidays, Chronia Polla... And for anyone who hasn't seen it yet, here's the lovely photo of Lisa dozing in the sun in her Christmas-red collar... 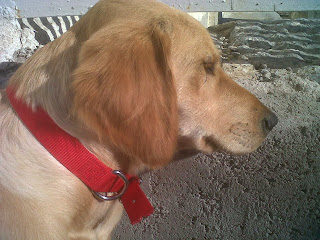 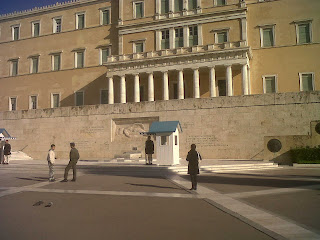 'I can't believe there's nobody here.'
My cousin and my mum came to Athens for the first time this week, arriving at the end of November for my birthday. Although - except for the first day, my birthday - the weather was cold and the sky grey, they were amazed how quiet it was. No queues, no crowds.

'It's so cheap here. And I didn't expect people to be so friendly in a big city.'
We've been lucky - at the last minute I found the airbnb website, and a whole apartment to rent for less than 200 euros for the week. I'd worried that it might be too far away from the centre, but it's been an easy half hour walk to the heart of Athens, via the ancient stadium and national gardens and Temple of Zeus. 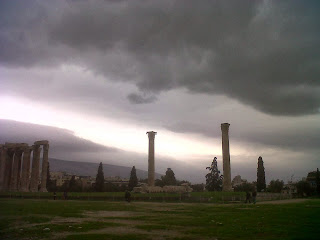 We practically had the Acropolis to ourselves. The ancient agora - where you could say democracy began - was deserted. I love seeing places afresh through someone else's eyes. My mum said she never expected so much green space around the Acropolis, so much of the ancient city uncluttered by modern buildings. 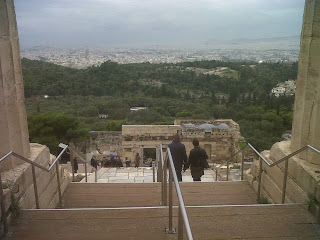 So it was raining... 'It's a UNESCO world heritage site - you'd think there would be people here all the time,' said my cousin. Much better to come for a city break late in the year than in the heat of summer. 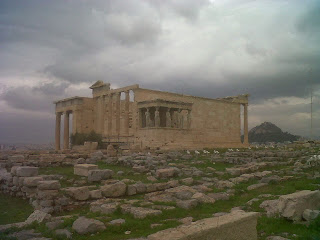 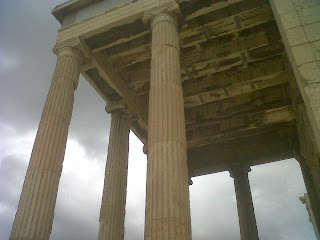 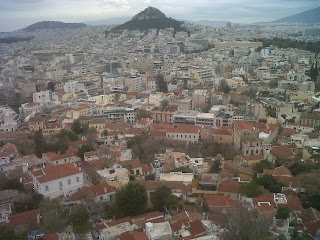 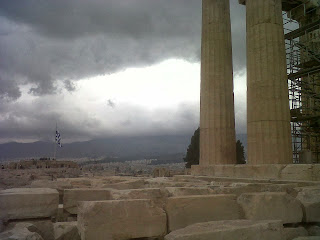 And when it's raining, sometimes you just have to duck into a cafe... We had mezes of winter salad and hummus and marinated anchovies with raki to drink, for 16 euros at the Ivis cafe in Psirri.

I'd never been to Pangrati until I rented this apartment, but it's a great neighbourhood with food shops, bars and cafes. We ate out three nights at To Mavro Provato (The Black Sheep); on our last night we ate a salad, big prawns and fennel in ouzo, prawn linguine, and the superb signature dish of tender lamb wrapped in paper with lots of herbs and cheese and baked in the oven - all for 48 euros including wine for the three of us. But we also ate very good food for a mere 22 euros for three, including wine, at Dionysus, 'The Quick Greek', just around the corner. 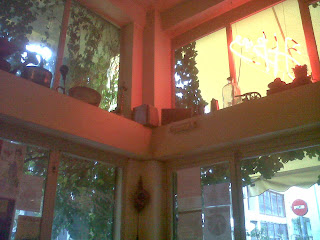 And I took mum to my favourite bakery on Sarri St. 'You never think of Greek bakeries being so good, but these are as wonderful as the ones in France.'

I'm not exclusively gallivanting in Athens this week - I'm also visiting the lovely people at EmBIO clinic every couple of days for blood test and scan while I do the pre-IVF meds. Jabbed myself in belly with needles a record five times yesterday. But yesterday was reported to be responding 'very well, excellent' (gold star!), and today: no injections! And tomorrow I get a nice long sleep while they take out some eggs and see how they look...
5 comments: