Life on a Greek island (or two) 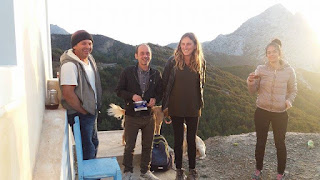 I’m sitting in my sunny corner of the taverna at Ayios Minas, listening to the birds. We stayed up late last night, dancing to music in our empty valley.
February brought some fierce, cold winds to these islands. One day, I set off boldly up the dirt track and was almost blown over as I turned the first corner, so I headed home again. But a week later it was calm and warm, and my work deadlines were easing up, and I decided to walk the loop: taking the first track a few kilometres uphill to the road, a little way along the road that follows the ridge, and then descending the second track a few kilometres back down to the valley.
‘I’ll come with you,’ said M.
I nearly fell over, and it wasn’t the wind this time. I explained where I was planning to walk and that it would take an hour or two.
‘Let’s take a bottle of water, then,’ he said.
M has been seriously bonding with Lisa. He looked after her for the weeks I was away in England over December and January. He’s trained her: if you say ‘Heri,’ she gives you her paw, and presents her other paw with ‘Allo heri.’ But I didn’t think M really did walking. I thought that was my department. Who knew?
When we reached the top, his cousin and aunt were in the pick-up truck on the roadside, looking for stray goats. M’s friend Pavlos would be at their place in Argoni on the other side of the ridge next day, where they keep goats and make cheese. We arranged to all meet there with his other cousin and uncle.
And so the next day we went for another walk through the river bed with cousins Evgenia and Georgia, two of my best friends in Olympos. 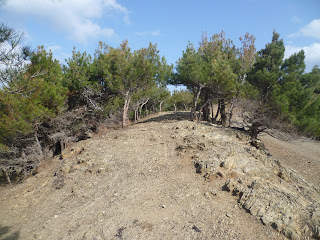 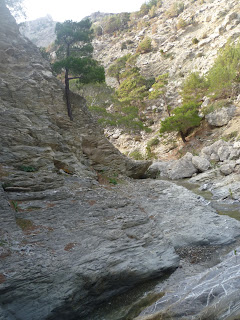 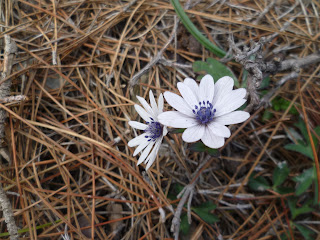 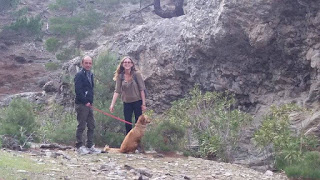 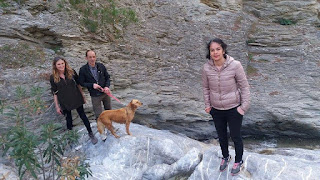 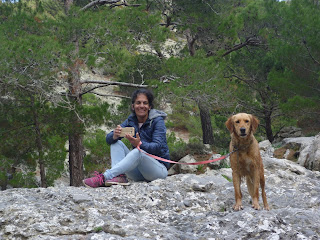 We didn’t have time to walk all the way to the sea – that would be next time. Instead, we returned to the house for a big lunch cooked by aunt Sophia, then we went outside to play with dogs and watch the sun setting. 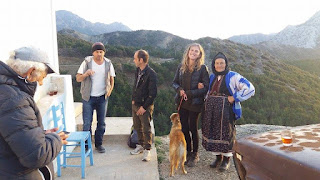 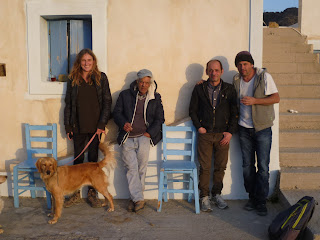 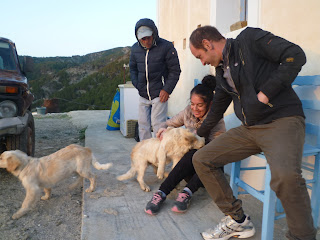 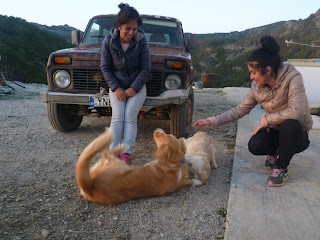 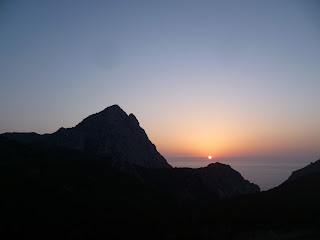 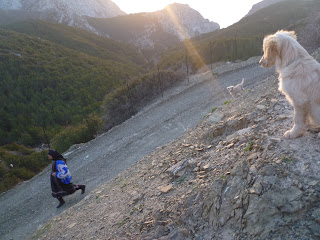 A few days later, I was leaving Karpathos on the Preveli… 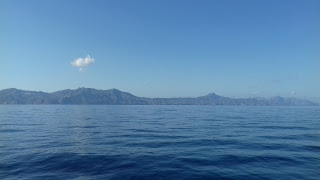 waking up in Halki… on a morning that was so warm I had to wear my shorts, and you could practically hear the locals whispering, 'A tourist!'... 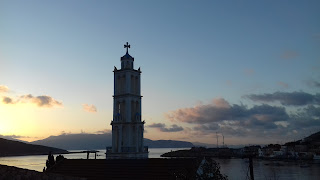 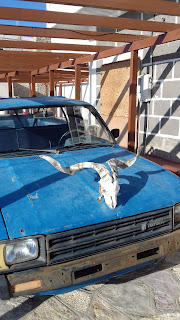 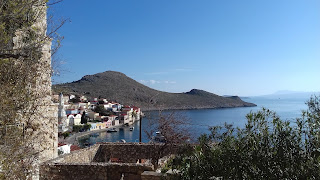 … to catch the Dodecanese Express to Tilos.
When I came to Karpathos last year, I kept on renting the house with the lemon tree in Megalo Horio, and invited other visitors to stay there to cover my costs. But it was a lot of work, and a big expense over the winter, and it no longer seemed necessary to keep it on. So on Thursday and Friday I started packing up my things to send them to Karpathos, and cleaning the house to give it back to Antoni.
On Saturday morning, I called Yorgos, the man with the truck who ferried my boxes on the last stage of their journey from England to Tilos back in 2011. He asked how much stuff I was sending and if it would be leaving on the boat the next morning.
‘Avrio?!’ Of course, the Blue Star was the next morning, and Yorgos would need to put everything on his truck that evening. I had a mad, sweaty scramble to finish packing up. Ed and Eleftheria kindly supplied extra boxes. I had about twelve boxes, five chairs, two bookshelves, a big wooden table.
Costas from Crete, who owns the house next door and visits for only a few weeks a year, just happened to be around. He asked if I wanted help. I looked at him.
‘What?’ he asked.
‘Well,’ I said, ‘I’m not going to say no…’
So when Yorgos arrived, Costas brought his carotsa, his wheelbarrow, and my other neighbour Andreas came too, and the guys all ferried my stuff down the narrow alley to the big truck. Phew. I tried to give Costa something to buy a drink that evening, but he refused.
‘But you helped me so much,’ I said.
‘Eimaste anthropi,’ he said. We are people. 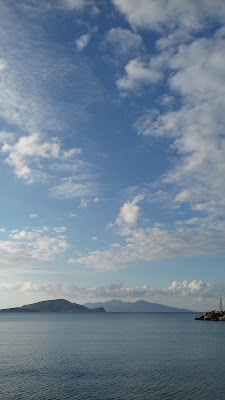 I ran into so many people, friends, over the next couple of days as I went to a few favourite places in between bouts of cleaning the house and giving things away. It was difficult. Tilos has meant a lot to me since I moved there in April 2011. But keeping on the house was cluttering my life in a way I didn't need, and life has changed in a good way since I came to Karpathos last April, and it’s time to embrace the next chapter.
My neighbour Michaelia was sad at first that I was letting the house go, but she understood when I explained and said, in her slightly scolding way, it would be good for me to settle down. Antonis said more pragmatically, ‘I know you’re an eleftheros anthropos,’ a free person, ‘and anytime you want to come back…’ Irini asked, more pragmatically still, for my pots of parsley. I had no time to see the apokries celebrations but there was fresh fish to eat, mayatiko, on two evenings; and even Eleftheria came out for a drink one night at Kali Kardia. On the Tuesday, in a free moment, I went inside the very old chapel overlooked by the house, which Michaelia keeps so beautifully, to see the frescoes.
I love that ramshackle old house, perhaps a bit more without all my junk in it. I sat there alone one night, thinking how wonderfully peaceful it was. Was it always that peaceful? Suddenly I remembered why I’d wanted to leave the house even before I came to Karpathos. I’d left Lisa with M this time – but if she’d been with me, she’d have been barking at every neighbour’s footfall and every passing cat. And Menelaos, if he’d been walking by clearing his throat, would have cursed at her as always… And I’d have been shouting at her and running up the steps to bring her inside. 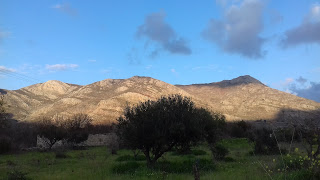 Antonis and Ed both came to help me with the four bags and a box (king-sized duvet, clothes, stereo, kitchenware, books, paperwork…) I still had left over to take on the ferry. As Ed drove me down to the port, he must have rolled his eyes listening to me again saying, ‘What am I thinking, leaving Tilos?!’ We pulled up outside Remezzo, the bar on the port, to wait for the boat.
‘Vodka tonic,’ said Ed, and it seemed a good idea. I heard my name inside at the bar and as I went in, I saw a few usual suspects including lovely Pavlos the bus driver. We’d exchanged hellos over the last few days in Megalo Horio, but I guessed that maybe he’d forgotten my name, seeing me without Lisa, and he’d just said, ‘Yeia sou…’ This time, he remembered, and shouted out his habitual greeting for me:
‘Yeia sou Jennifer Lopez!’ 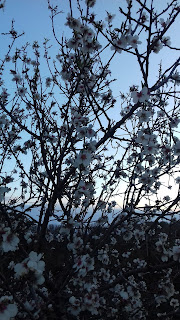 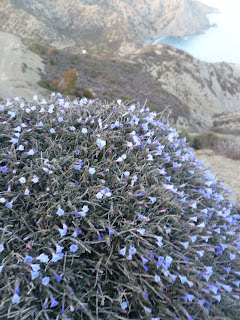 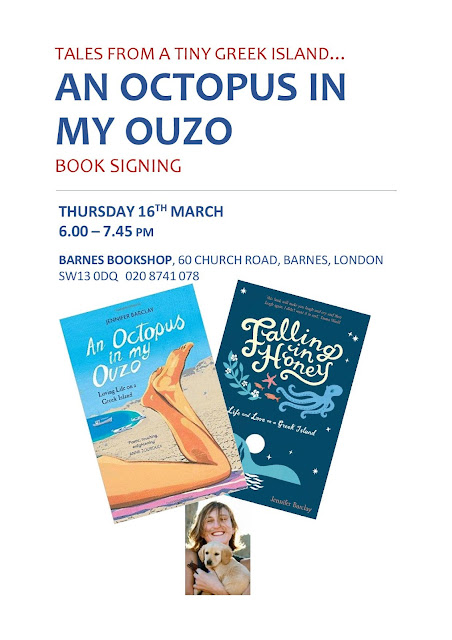