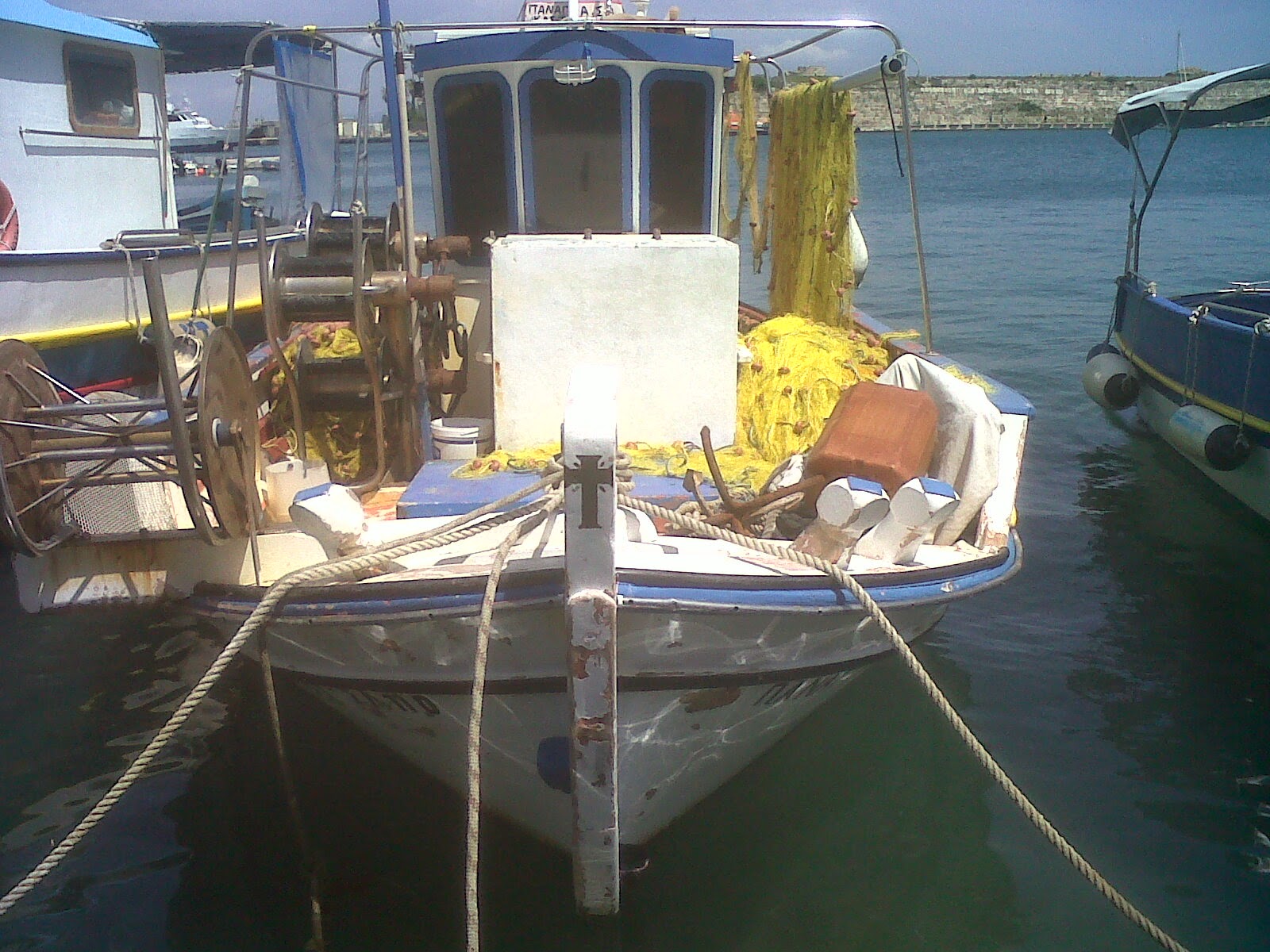 Juicy and messy… No, not my life, just an afternoon snack of big Greek tomatoes, eaten whole. A taste I’ve missed.
Now, evening. The smell of a harbour. Sound of palm leaves rustling, mopeds haring by on the road below, a high-pitched church bell clanging. Sitting on my balcony overlooking Kos harbour, I’ve already eaten handfuls of peanuts, their pink papery skins encrusted with salt, as I sip on a glass of buttery, fruity, local white wine.
I’ve been gone too long from Greece, but it’s allowed me to experience everything afresh. I’m arriving at the same time of year I did four years ago, when I came to stay, that new beginning. When the cab driver from the airport today asked me if I was staying many days in Greece, I said a definitive ‘nai’, yes, and laughed. 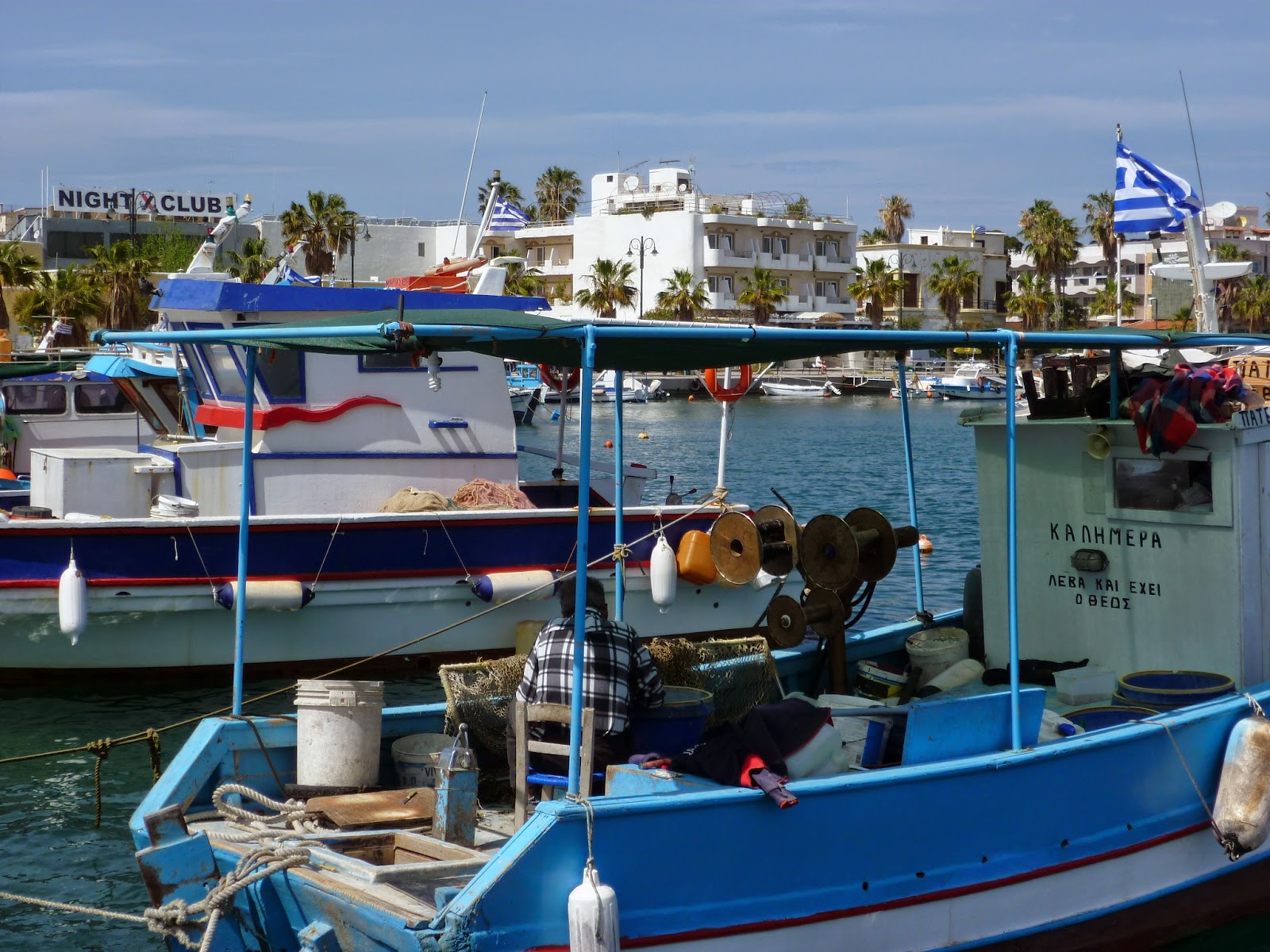 It’s a wonderful time to arrive in the islands of the South Aegean. As we landed in Kos – that dramatic landing, veering away towards the island of Nisyros, low over the quarried pumice islet of Yiali, then swooping back low over the blue sea to land across a narrow, flat piece of the island – the land looked green. The cab driver said there had been a lot of rain but now for a week, kalokairi – summer. Tourists just started arriving this week; in two weeks’ time, he said, the island will be full. And what of the economic problems? ‘Here, we don’t bother ourselves with that,’ he said, half-joking. ‘We have tourism.’ When I ask him about Greece leaving Europe he says, ‘They won’t let us. And we shouldn’t.’ I am, by the way, chatting to him in Greek. It’s been a shaky first day, forgetting how to say things, but as always the Greeks are complimentary of any attempt to speak Greek.
We passed olive groves, vineyards, all a bit ramshackle; wandering cows; bakeries. The cab driver waved hello to other drivers. It’s that familiar start-of-season, start-of-summer optimism that you get, especially on the big islands. There was warm sunshine and a breeze, green not yet burned to summer brown.
I arrived too early to check in to my room, so sat with a frappe and iced water on the terrace of the grandly named Kosta Palace (where I am paying a grand total of fifteen pounds, including breakfast), taking it all in: the pale blue sparkling water, across which were the minarets and blue domes and palm trees of the town against a backdrop of mountain ridge. Pop music was blaring. The cab driver had been playing music too. I missed music. 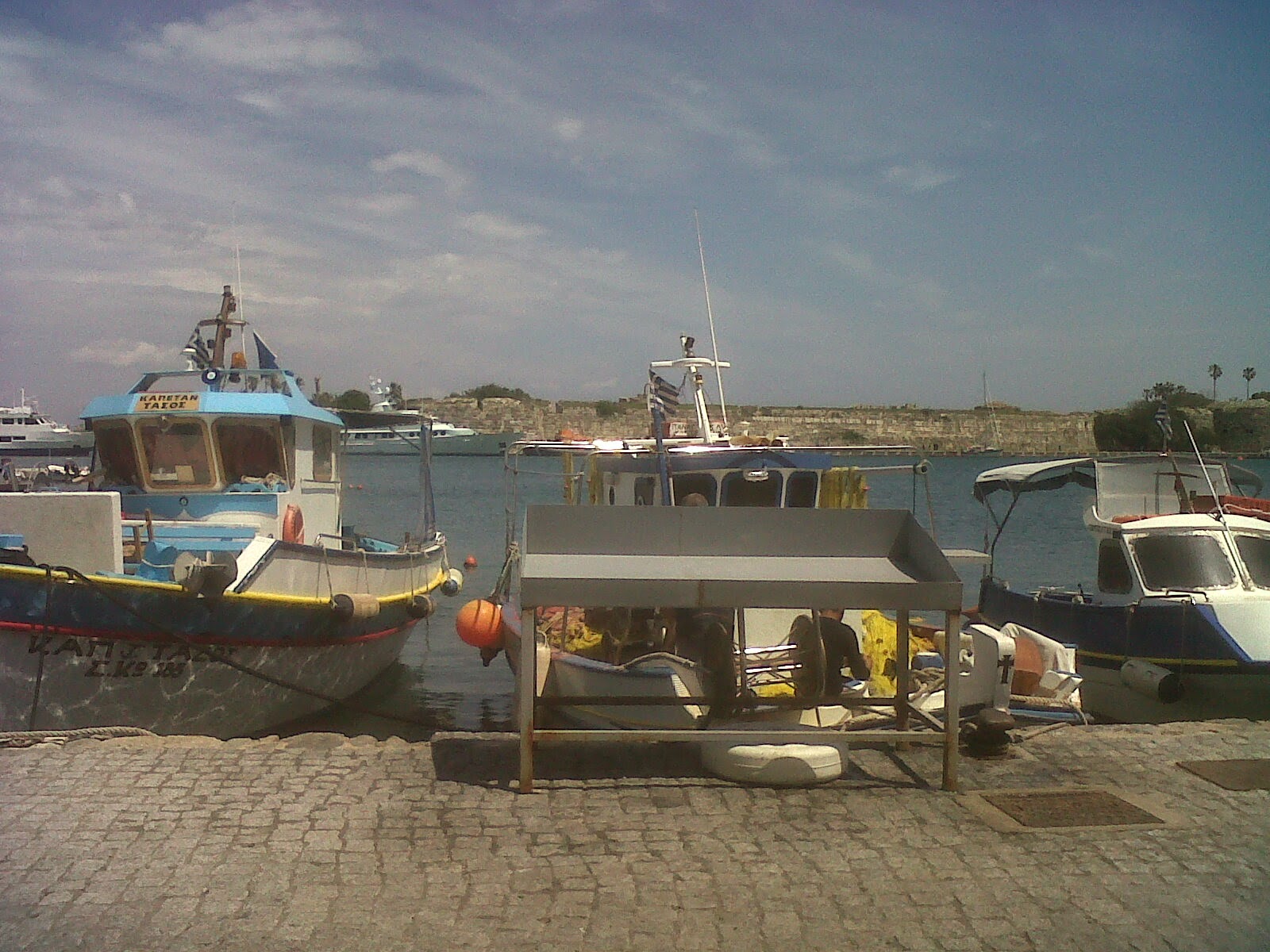 After my coffee, I didn’t have to wander far to find a bakery with a good cheese pie, and next door was a ticket office where I bought my ticket to Tilos for tomorrow, while at the café-bar opposite, groups of young people sat around sipping coffees, enjoying the sunshine. I walked back to the harbour and watched the fishing boats with their blue trim and hand-painted names: Kapetan Tasos, Giorgos, Maria. A wiry old man a with deeply tanned, lined face, wearing rubber boots and old clothes, was telling his young helper to leave his work mending nets on the boat with the cross painted on its prow, the Panayia Kastrou, Our Lady of the Castle. Ela! As to…
Many of the boats had dark blue circular talismans against the evil eye. Another young man was threading bait onto hooks, listening to music. ‘Eh Yiorgo, ti ora eineh?’ he shouted at a man who was strolling from one boat to another. An old man put a cigarette in his mouth, tossed the cellophane from the new pack over his shoulder into the water. He stood to talk to Yiorgo, gestured with his arm outstretched and his thumb and forefinger twisted in a question, lamented the state of affairs compared to the old days when he would make such-and-such ‘kathara’, take-home. Then he sat again with a mobile phone to his ear. 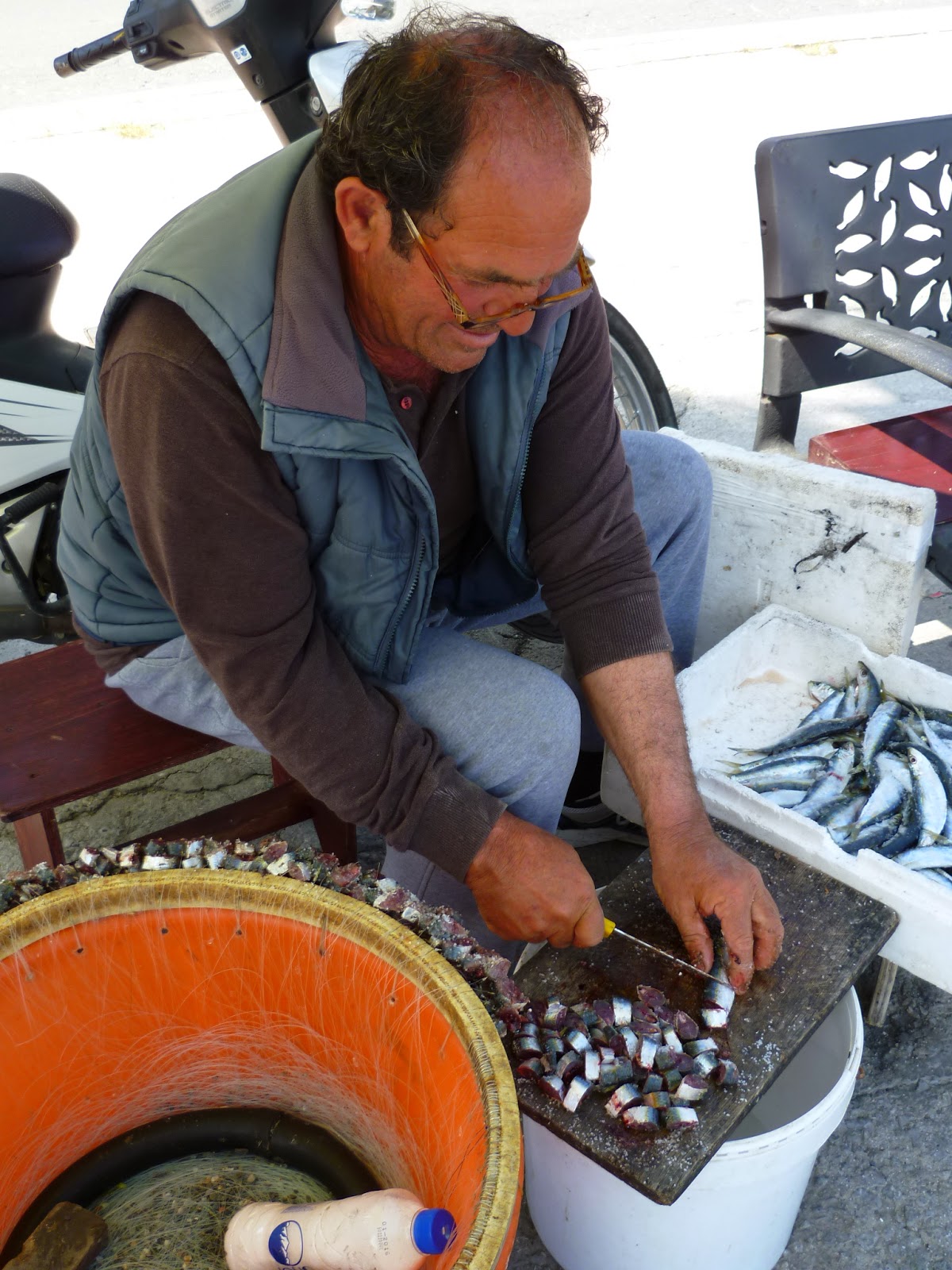 I asked another fisherman on shore about the threading of bait onto lines. He was cutting up fresh fish and threading the pieces onto lines arranged around the rim of a bowl-shaped bucket. He said it was called ‘paragadhi’, and you trail the lines behind the boat one by one.
Later, I wandered around as a cool evening wind blew off the sea. I stopped to look in a cheese shop, and the man inside smiled in welcome. I passed a tiny chapel with ancient white marble revealed beneath the modern exterior. The roots of olive trees were pushing up the concrete slabs of the pavement. A man on a motorbike was laughing with some tourists standing at an ATM: ‘Money, OK! Today. Next month, maybe no money!’ There was a tantalising smell of grilling meat as I passed neighbourhood tavernas, and little houses covered in pot plants.
Now it’s dusk, and a fishing boat is chugging in to shore. The sun has gone from the mountain opposite, and the water has turned pale, a few streaks of cloud tinged pink. I’ve finished my wine and eaten far too many peanuts. Lights are beginning to come on around the harbour, and the fishing boats are bobbing on rough water.


I have a ticket for the ferry to Tilos leaving tomorrow lunchtime. I hope the wind dies down a little. But nothing, not the prospect of seasickness or delays, can quell my happiness at being back in Greece. It’s a year since I first went to Australia; Yiannis has to stay there for now to look after his mother. I still have the tiny bag of sand from Skafi beach that I took with me when I left, which I’ll scatter back where it belongs very soon.
12 comments: