There’s a bird in the bedroom! I wondered what that sound was, why it sounded so close. I looked up from where I was working at the kitchen table and saw it on the wooden railing of the mezzanine bedroom, a tiny delicate wren-like thing, sitting on the balcony. It must have flown in by mistake. I went upstairs to try to coax it down but it hopped off in the wrong directions, so I closed the bedroom curtain so it didn’t fly at the window, came down and opened the two kitchen doors wide and went outside for a while to let it escape without being frightened. I stood on my terrace and looked out at the clouds hanging on the mountaintops, sunshine further down in the valley, heard a dog barking and a farmer shouting at his animals somewhere.
I’d had visions of this happening a few months ago when I thought about renting the house: there’ll be goats in the kitchen, I just know it! And in fact I did find a goat outside my kitchen door the other day, in spite of grandfather Pavlos’ best efforts to keep them out and stop them eating his rose bushes. But no, a bird in the bedroom, that was a first. I came back in and sat down at the computer to continue with what I was working on, and a sudden panicked fluttering of wings erupted from behind the computer. It’s still flying round in circles every now and then. It’s not the brightest bird. And a bee has now joined it. I often have bees, but that’s normal when you live next to the honey factory. 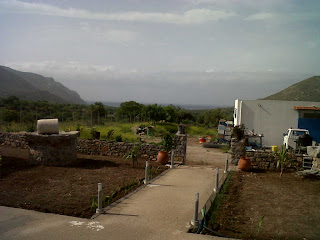 The honey factory is a big shed with many hives close by, where my landlords come and potter around several times a day. I love the humming sound. I love the honey, too. All the paths here are full of flowers at this time of year as well as thyme and oregano and other herbs, and the bees love it.
Last night, after spending too many evenings as a hermit in my little house because it is pitch black all around after nine o’clock, I ventured the ten minute walk into my village of Megalo Horio. I’d practically run out of food, so called in at the little shop and got into a long conversation with Irini who runs it. She was sitting behind the door reading a book, perhaps a bible, when I entered the tiny room that is a convenience store. She carefully checked the dates on the tinned food I was buying, and told me I must go to the supermarket for bread – that is what we call the slightly dustier shop in the village that has more than one tiny room, and you never know what you might find on the crammed shelves, except for the one aisle that has only pasta and shoes.
Anyway, Irini and I spoke in Greek and she said she was pleased to meet me, and asked where I was staying. Ah, good people, she said. It turned out she keeps goats near where I’m staying: I knew I’d seen her before. I learned it’s her name day today, and there’s a panayiri, a festival at the little church in Eristos – aha, that’s the church I passed on my lunchtime run, where the priest was putting up bunting! I must come to eat something, said Irini.
Several people came by and joined in the conversation including Ian, an Australian who stays on the most remote part of the island with his girlfriend, and because we’d never met properly we went up the road to the kafeneion for a beer. Ian, in his walking boots, has something of a thousand-mile stare after wandering the remoter parts of the island for a while now, as well as other parts of the world. Soon the kafeneion filled up and I got into conversation with Vicky, who runs the elephant museum (of which more some other time). Her English is excellent from speaking to visitors, so we spoke mainly in English and she translated everything for the benefit of her husband and the rest of the men all sitting around in a rough circle drinking ouzo and eating mezzes and flicking their worry beads. The priest came by and flicked Ian on the shoulder with his worry beads. I mentioned the festival.
‘Irini – Irene in your language,’ said Vicky.
‘Yes, but I think Irini sounds better,’ I said. ‘It means peace, doesn’t it?’ We’d been talking before about what a waste of money the royal wedding was, which led Vicky on to a diatribe about revolutions caused by inequality, and how the middle way is better.
‘Yes!’ she said. ‘Ah, and there is a song – Goodnight Irene…’
She asked where I was living and when I told her I was staying in the house next to where the Koumpanios family make honey, she told everyone else.
‘Kaloi anthropoi,’ was the general consensus. Yes, good people.
It has become very clear that I have become a Megalo Horio person. I have taken sides. Tilos is a very small island, just eight miles long by a few miles wide, and its two villages are perhaps five or six miles apart. But there is a fierce rivalry. There was a tense moment in my conversation with Irini in her little shop, when I told her that two years ago I’d stayed in Livadia for a month.
‘But… Megalo Horio is better,’ I quickly added. ‘I like it better.’
‘Yes, kori mou, it is better…’ 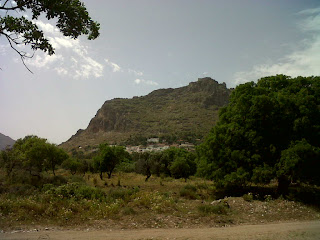 The other place, Livadia, for the record, is a very nice place. It is the main port, and it has grown up there from around the fifties when the people of Mikro Horio (meaning small village, note, not nearly as good as Megalo Horio, big village) decided it was safe to live near the sea as there were not so many pirates these days, and they built new houses on what had been the meadows, the livadia, and just brought the roofs of their old houses. It has grown a little haphazardly, but by most standards it is a beautiful, sleepy place with good people. I have friends in Livadia. On a day when I don’t have much to do, I can walk there. But I must admit, when I went there the other day, it felt a little strange at first. It was like crossing a border, or going into the big smoke, where people do things differently.
When I think of the glib way I made the decision of where to live a few months ago – the apartment close to all the amenities, the seafront bars and restaurants in Livadia, or this more rural house in Megalo Horio, I shudder to think how close I was to getting it wrong. When I talked to my friend Steven about it, he’d said ‘You know there’s no choice’ – I had to be in the place where there was a possibility of goats roaming into the kitchen. And indeed he was right, but he didn’t know why. They are good people in Megalo Horio.
Now, I am just hoping the bird will leave so I can go to Irini's name day festival.