January on a Small Greek Island 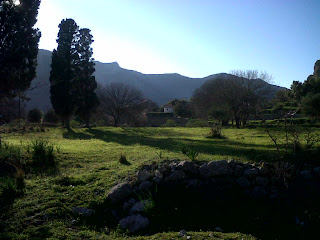 This little rock in the sea has been fairly battered by rainstorms this month. The other night I woke up at two a.m. to lightning flashing through the windows, deep thunder very close and rain lashing down at the walls.
No wonder it’s as green as St Patrick’s Day all over the island at the moment.
I ran down and unplugged everything, especially the new modem which Yiannis the Telephone Company Man – speaking of saints – spent three quarters of an hour on his Sunday evening setting up. The storms are keeping him busy.
Being a public sector worker, his salary has been reduced by a third. The people who work for the government office have now only been paid for one month out of the last six. They should quit and go into business selling modems. Ntelos told me he knows someone who lost eight to storms last year. 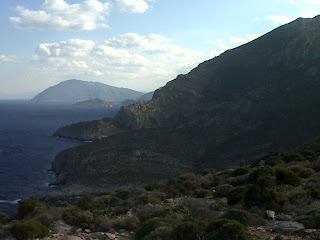 But in between storms, the sun shines gloriously; you have to get out there and see the island this beautiful. A friend asked me the other day why I’m not having a sleep in the afternoon any more but going to bed early. It’s because at this time of year, early afternoon is my favourite time to get out and walk. 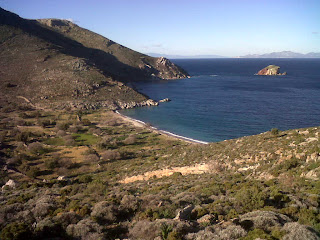 Back at my office in the UK before I moved here, I would often spend my lunchtime going to Marks and Spencers to do food shopping; then getting to the checkout, seeing the twenty-minute long queues of other people doing the same, and giving up to find a quick sandwich elsewhere.
Here the kitchen is already full of big bags of oranges, cabbages and cauliflowers and broccoli, and spicy horta leaves Stelios gathered from a field. And there are usually leftovers from the tasty dark free range pork we’ve been roasting with potatoes in lemon juice and oregano. And all of it is from Tilos.
Here when I’ve had enough of being tethered to my desk, enough of staring at a computer, I put on my boots and jacket and start walking. When I set off towards Eristos, I can hear the waves crashing up on the beach from far away across the silent valley. In the other direction towards Skafi, there’s often the lovely jangling of bells as Menelaos herds his sheep down off the mountain. 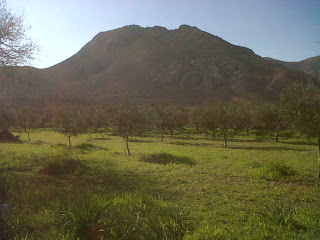 These last few weeks, more often than not I see a big brown eagle hovering on majestic wings high above the fields, hunting. One day Stelios and I set out in the car down the dirt track and startled an eagle that had just caught a snake and was carrying it off.
Of course, I can never get photos of the eagles as they’re too far away; just as I can never get photos of the goats as they run away too fast. But at the moment, wherever I walk, I am constantly startling families of goats, the youngsters bounding about on stocky legs, play-fighting and making a bee-line for their mother’s milk. 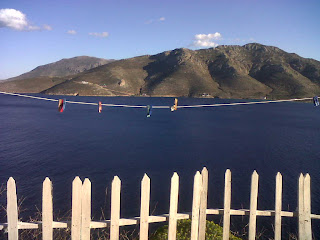 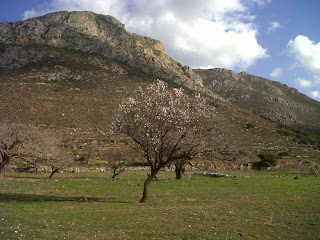 Sadly, two more well loved old men of Tilos died this week. Five people have died on the island this month, though they seem to have lived to a good old age. One, Costas, was in his eighties and still walked around every day and loved dancing at the festivals. Eleftheria’s grandfather was ninety-four and she says it came as such a surprise as he seemed perfectly fine that very evening.
When I walk the backroads around the village there are so many abandoned ruins of stone houses from years ago. They’re beautiful, but of course it makes you wonder about the future of the island. Will the population keep dwindling, with work getting scarcer – will young people have to emigrate? Or will people come back here to their roots and make the most of it, hunker down on a bit of family land? It’s a tough choice for someone who needs to think about their future.
I’m lucky to have work and there’s certainly nowhere I’d rather be right now. I still feel incredibly privileged and happy to live in such a special place. 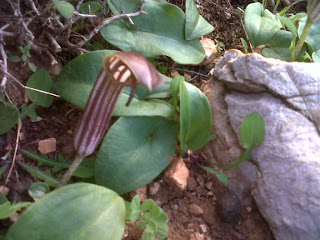 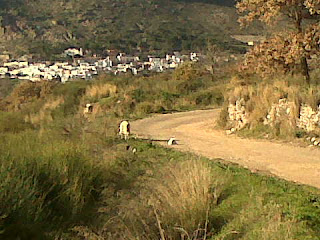 On the way up to the village this morning during a sunny break in the rainclouds, I took the shortcut through a field with some goats and sheep. One little goat was leaping up high in the air on all fours, trying to head-butt his friend. Another had discovered a hay bale covered in plastic made a great slide, and kept climbing up and slithering down it. When they saw me, they stopped and acted serious, pretending they were just munching grass all along. Playing? Us? Naaah… 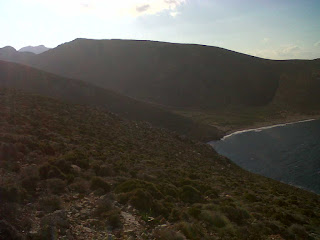 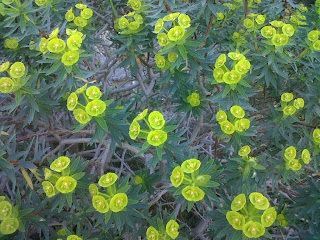 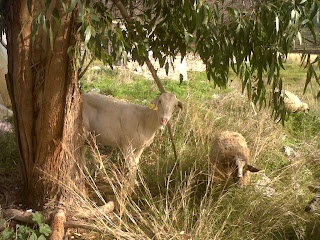 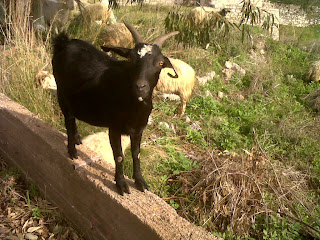 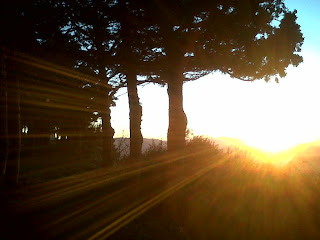 Think of semolina… Yuck. I hated semolina when I was a kid. Bland white stuff you had to put jam into to make it tasty. On the other hand, how about this?
Stelios apologises for emptying half a jar (a glass full) of honey into the pan with water. As it heats up, he adds the zest of an orange (recently picked), some cinnamon and a few cloves. Meanwhile in another pan he heats up plenty of – guess what – olive oil, and eventually stirs into this the dry semolina as if it were risotto, keeping it moving until all the oil is absorbed and the whole thing cooking without burning. The two pans get mixed together with raisins and walnuts broken into small pieces, and there we have it: halva, a delicious and rather healthy dessert.
Now think of another thing you might have hated when you were a kid: beetroot. That vinegary stuff in jars was always on the buffet table when we had a family ‘do’, and turned the lettuce and salad cream red. 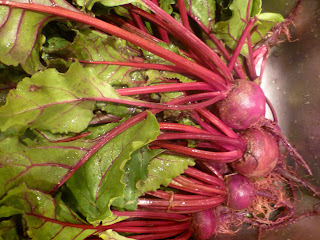 Of all the seeds we planted a couple of months ago, the beetroots came up in abundance, and when I checked the garden the other day a few of them were showing above the soil, clearly big enough to pick. I aimed to cook them the way we ate them in Athens: boiled until slightly soft when the skins peel off easily under the cold tap. The green tops I cooked quickly after and roughly cut into pieces. Drenched the lot in olive oil, lemon and garlic. 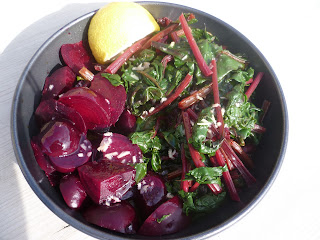 I haven’t had to water the garden lately. It rained for three days. In what seemed like a break in the rain, we drove to Plaka for a walk, but didn’t get much farther than the little church of St Nicholas. We sheltered in the abandoned house on the hillside, watching the rain on the trees where the peacocks were hiding, listening to the sea down below, and I wanted to live there… 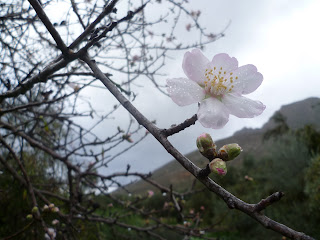 Yesterday I wrapped up and took my umbrella and walked down to Eristos to take pictures of the waves sweeping in and the dark clouds. 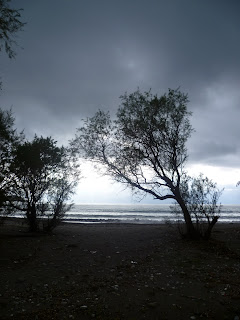 The waves had left seaweed right up the beach and the shapes of that and the wet driftwood reminded me of Vancouver Island. The place we used to swim from in the autumn was covered in pebbles washed in. 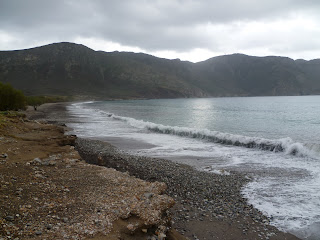 As I walked back, the sun came out and was so hot I had to carry a jumper and jacket and scarf. Everything was incredibly clear. 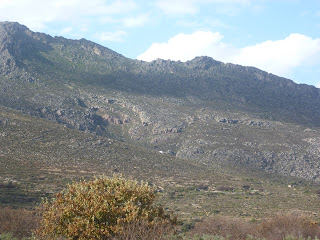 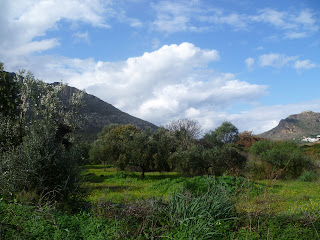 Then within half an hour the dark clouds were gathering again.
I’m grateful to be online at all today. The amazing lightning during last night’s storm actually exploded our modem. It made a loud crack and a bright white spark as the chip actually exploded into pieces – Stelios couldn’t resist taking it apart to see inside after. We’d unplugged the electricity but didn’t think of the phone line. It turns out the same happened to others in and around Megalo Horio – even those with the UPS surge protector. Powerful stuff, lightning! Lesson? Unplug everything when not in use, and have an extra stash of spare modems. And meanwhile be grateful and I didn't entitle this blog post 'Greece lightning'.
I am very happy that Nikos, Stelios's dad, who had a minor stroke just after Christmas, got medical attention right away and made a full recovery. He and Vicky spent New Year's Eve in the hospital in Rhodes. It was a nasty scare and a good reminder to live well and count our blessings.
A happy and healthy 2012 to all. 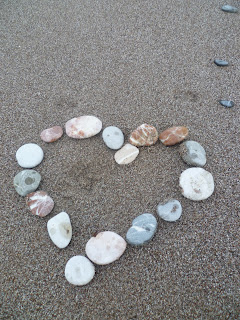