Beware Greeks, Even Those Bearing Gifts

The path from Menelaos’ farm to my house is a rough, slippery track of rocks and sand. Look at these crazy people on a motorbike scrambling down the hill with a bag of potatoes on the handlebars and a sack of manure balanced precariously on the seat in front. The woman looks terrified as they slalom down, the man shouting at her in Greek to do – what? She has no idea, because that woman would be me, and I only just heard the word for sack the first time today so how would I know Stelios wants me to grab hold of it to stop it sliding off?
I am beginning to rue the day I introduced Stelios to gardening. He is even more obsessed than me, and we are actually fighting over who gets to dig the earth.
‘It’s my garden!’ I protested. Why do I feel the need for blisters on my hands? It’s partly because I like experimenting with my very first garden. But of course I am grateful for the help and for Stelios’ ability to know exactly where to procure some goat manure for fertiliser. Menelaos has two thousand goats, he told me, so I’m sure he can spare a little.
Partly I want to dig my garden for the exercise. But if I try digging my garden in front of Stelios and Pavlos, they will laugh at my girly feebleness. Which is why I must sneak in some gardening when no-one’s around.
‘What’s that,’ said Pavlos, pointing at my new plant, ‘dendrolivano?’ Yes, I admit, it’s rosemary, knowing exactly what he’s going to say next.
‘Why did you buy that? Where, in Rhodes? We have lots of it here in Tilos! How much did you pay?’
Thing is, I’ve heard exactly the same from Stelios. I find myself lying again about the price, just to defend myself: I say two euros, when it was actually three.
‘Oh. That’s OK.’
It reminds me a bit of the laughter that ensued when I brought my lovely wooden dining table from England for the terrace. ‘We have tables here!’ Well yes, but I love the way the sun has bleached the pine and the way I can photograph fruit on this table and it looks beautiful. It used to be my dad’s and it gives me a lot more pleasure than a rickety white plastic one, however much more practical and, well, Greek that might be.
And I did manage to grow a good crop of tomatoes this year, and am still harvesting a couple of courgettes a day and some rocket, and even got a couple of ripe melons - one of which was shared with an earlier riser... 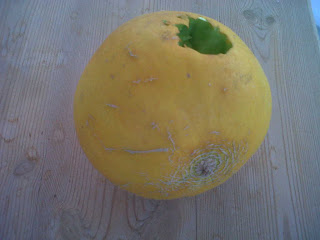 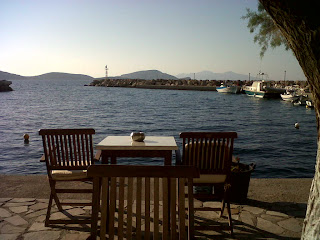 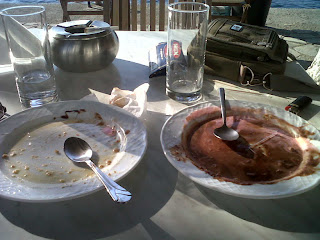 ‘Where’s your father?’ asks Pantelis, grandfather of my Tilos family, when I go into the village. ‘He’s gone already? Just two days in Tilos?’
‘Unfortunately yes – he’s always working!’ I say. I was delighted my dad made it here for a couple of days. ‘But I’m sure he’ll be back – he loved it!’ He fed peanuts to the ants on the terrace of the kafeneion; I wasn’t sure Sofia would be keen to have him back so soon, but she seems to have taken it that eccentricity runs in the family.
‘And your mother, when is she coming back?’
I love this. Once you’ve visited Tilos once, not coming back at least for regular visits seems like some sort of betrayal. 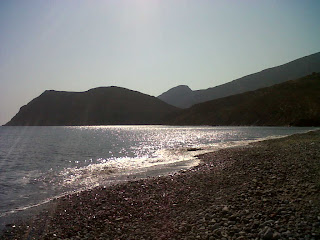 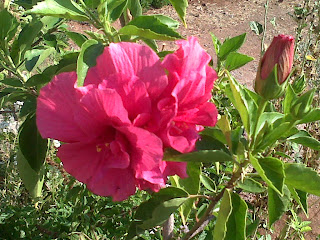 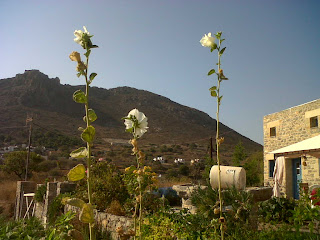 I go to the supermarket and young Georgos the nurse is in there too. He looks up and down one aisle while I look up and down the other, then we swap and do the same as if it’s a sit-com.
‘What are you looking for?’
‘Chlorini, bleach.’
‘Me too! Where is it?’
We swap aisles again and look in vain. When we give up, Rena comes and points it out, hidden behind something else.
‘Here we are,’ says Georgos, handing me a bottle, grinning. ‘Good for the hair.’
This week I got a message from Dimitris to talk to Irini about something. The next day, Stelios said ‘Oh, something I had to tell you’ and it was that Irini wanted to speak to me about something. Then I got a message from Evgenia saying her mum, Maria, wanted to see me. I wondered what it was about as I walked up to the house, but of course – it was that Irini wanted to talk to me. (Ve haf vays of making you talk.) It was good to go and see Maria anyway, and as a side benefit I got fed fried aubergines and delicious locally made cheese marinated in red wine, and given a care package to take home with more food for tomorrow.
Meanwhile, I still have half of this fish to eat. Kinigos, hunter, it's called in Greece. Stelios arrived with it in a plastic bag.
'Wow! When did you catch it?'
'Now.' 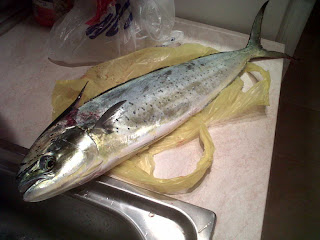 As you can see, it was pretty big, as in the full length of the oven baking tray. I cleaned it and, thankfully, my fish-gutting skills were not called into question. We ended up cooking it in pieces with oil and wine, onions and peppers and tomatoes. The thick white meat fell off the bones beautifully.
Best news of all this week: my book about falling in love with Greece in general and Tilos in particular will be published next summer by Summersdale. Called maybe 'Greek Honey'. Thanks to my exceptionally perceptive colleagues for seeing potential in it.
'I hope you don't think this is insulting, but it reminded me of Mamma Mia,' said Claire in the office. Insulting? Far from it - bring it on! I want that scrawled over the cover, along with author Ben Hatch's comment on my last blog post about fishing:
'I am so jealous of your life. I just went to Tesco's, for goodness sake.'