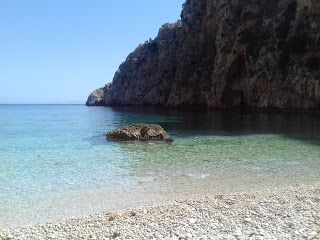 The little island of Halki is a useful stopover on the way from Tilos to the north of Karpathos. It’s less than an hour on the Dodekanisos (a.k.a. ‘Spanos’) catamaran to Halki, where two days later you can pick up the big old Anek Preveli for a leisurely couple of hours’ ride to the port of Diafani, and the whole journey costs just over twenty euros.
Accommodation on Halki can be expensive, however; dog-friendly accommodation is particularly tricky, but luckily I found a new apartment available on Airbnb for a good price. For the first night, however, we’re heading to Pefkia to camp for the night. Wild camping is generally acceptable as long as you’re out of sight and leave nothing behind. Beyond the harbour, Imborio, Halki has a surprising wealth of wild, deserted places.
Pefkia is somewhere I discovered after another wild camping night last year. Waking early in my hilltop hideaway, I’d made my way across to the flat area on top of the headland and found ancient remains, which I later learned were the remains of temples dedicated to the god Apollo. I suggest it as a place to camp before setting off the next morning to see the hermits’ cells at Kelia with frescoes from the ninth and tenth centuries. Ian agrees that it sounds a good adventure, and Lisa – well, our canine companion doesn’t have much choice but to go along with the plan. 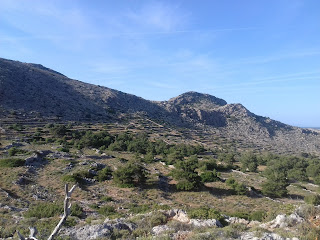 It’s a clear evening, with views across the sea to the south of Rhodes and the north of Karpathos. Along the mountainside are old terraces. Dogs bark, cocks crow, and shepherds shout as they round up animals, their bells clanking. The start to the path is unmarked and hard to find. Rough and overgrown, it follows a wall and then the terraces above an area of pine trees, then up over rocks towards an old stone shepherd’s hut and juniper bushes with green berries.
There’s a cool wind and it’s rockier than I remember, so we choose a place under a wind-bent Mediterranean pine, its needles softening the ground, with a touch of shelter from the dry-stone walls around. To save on weight for hiking, I’ve left the tent behind and have just a mat and sleeping bag. The mountain of Attavyros on Rhodes is now grey, the sea pale blue, the sky changing to mauve with a streak of white cloud.
By the time Ian has finished taking photographs and we’ve cleared the camp site of the worst rocks and are drinking raki, dusk is falling. Lisa’s sitting on a wall, alert for goats. We listen to the scops owls’ reedy high-pitched calls, like a short note played on a wooden recorder or whistle over and over.
The picnic we’ve brought is, frankly, a bit messy. We’re used to camping on a beach where it’s easy to wash in the sea, and we have limited water supplies for the next day. The chunk of graviera cheese is delicious but oozing after being out in the heat all day. I steer clear of the sardines and olives. Ian has decided that this would be a good day to try corned beef for the first time. I help him open the can, forgetting that it too has been out in the heat, and grease spills all over my hands. He takes a mouthful of the warm meat paste, decides he hates it and that I should feed it to Lisa. It does smell a bit like pet food.
Meanwhile, the wind has completely dropped, and we are plagued by a surprising number of mosquitoes considering we are up on a headland hilltop. Because of the wind and position, we didn’t bother to rig up the net and although I throw a rope over the branch above to hang it from, the positioning isn’t ideal to cover all the bases. The ‘natural’ mosquito repellent makes me feel sticky but doesn’t deter the buzzing and biting. We turn in early, at which point I find my new sleeping bag is way too hot, and Ian’s new inflatable sleeping mat makes loud noises every time he moves. I long for my tent, cannot settle and eventually move off to sleep fitfully on a sloping but smooth-ish rock which catches a bit of breeze. 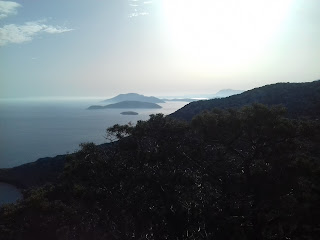 The morning is serene, however, with a golden light on grey walls and pines and junipers and mastic bushes, the only sounds a few goat-bells and the distant engine of a boat going out. The sky is pale blue with a few tiny clouds. None of us has slept much but I’m keen to set off while the day is fresh.
From the flat field near the ancient marbles, we pass through a gap in the wall and follow what is barely a path along a hillside of rocks, bushes and scrub, with the deep blue sea far below down and views across to Symi and Turkey. There is no-one around, but plenty of signs that this steep land was once cultivated, with faint old stone terraces. 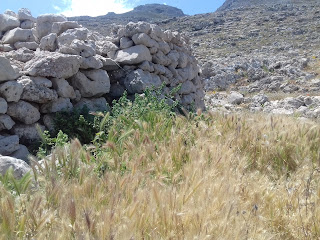 Round shepherd’s huts on the hillside above blend in with the stones all around, so often the only way to make them out is the black rectangle of a doorway. When we stop to examine a tiny hut or kyfi, there is silence except for waves far below and birds unseen around us, and Lisa already panting in the shade.
Below, the sea is now turquoise and a flat coastal strip gradually comes into view as we progress, with very faint lines of threshing circles and walls, maybe a church. There’s no marked path, so we simply continue along the hillside. We negotiate our way around an enclosure with thorn bushes and broken rusted fencing, then cross a gully with oregano, butterflies, and euphorbia that has dried to crimson. I hope that we are descending to Kelia to see the hermits’ cells, but the stupendous sheer cliffs of the canyon soon tell me it’s Areta.
We must have missed the descent we were aiming for. The spirits of the hermits didn’t want to be disturbed. 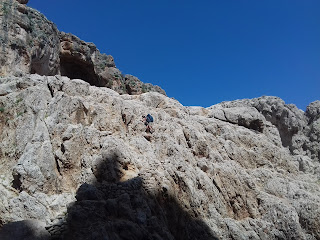 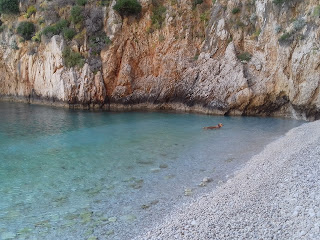 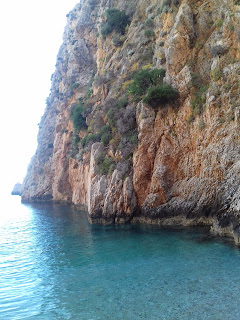 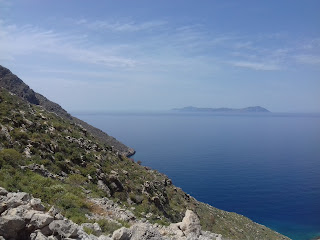 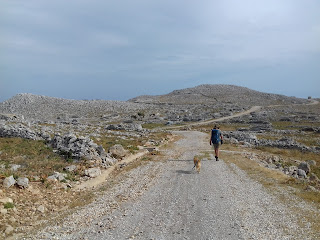