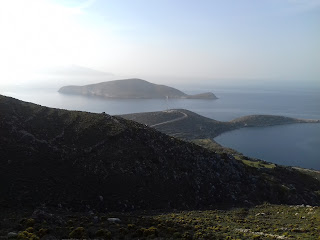 The sun set on Easter – rather spectacularly, with golds and pinks and pale blues. Greek Easter is done and dusted for another year, though it won’t be truly over until the last firecracker has resounded like a gunshot, breaking the silence that reigns during these warm, still days, and sending Lisa whimpering into the smallest room in the house.


Although it always takes a great effort of willpower to leave this house by the sea after dusk, it felt important to walk to the village on Easter Friday evening and join the quiet procession in the dark to the cemetery (the kimitirio, the place for sleeping); to be with the community as we remembered loved ones lost this year and previous years, some buried here and some laid to rest elsewhere. The sadness of the occasion was somewhat leavened as villagers quibbled over whether the priest was being thorough in his prayers for everyone’s relatives and talked loudly over his quiet chanting. Then we walked back up to the church, where the faithful pass under the flower-covered epitaphio while the mischievous set off more little bombs. I’d been reading recently about how dynamite has long been associated with rebellion against overlords and other authorities on the nearby island of Kalymnos. In theory, it’s a fine thing. In practice, I’m with Lisa on this one and took it as my cue to leave.


The traditional thing for Easter Sunday lunch is, of course, roasting a whole goat on the spit; but having witnessed the kitchen end of this at close quarters while living at the taverna at Ayios Minas, I was happy to give it a miss. This year it would be salad eaten a la swimsuit on the terrace. The days were so warm that Lisa and I gave up on the late afternoon walk to the monastery on Saturday and turned off instead to Plaka for a second swim of the day. I think this was the first afternoon this year that I’ve truly wanted to linger in the water. The sea was flat and blue as we walked home. And as the sun was going down, I was nailing new screens to the doors and windows against mosquitoes. There aren’t many here, but it only takes one... 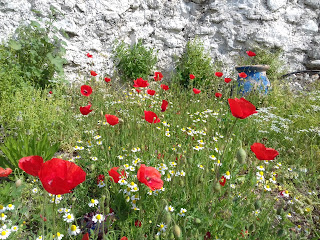 Since this house at Ayios Antonis became mine last October, I’ve been slow at making changes, not wanting to be overly hasty in changing the spirit of the place. Certainly, since the place had been uninhabited for years, there were electrics to be updated and plumbing to be fixed or improved, all of which was completed by mid-January by local guys. With help, I’ve filled in cracks in walls where the rain actually made its way into the house, and cut back some of the overgrown forest that was the garden to reduce the actual danger of walking around it.


The next major job that needed tackling has been the fixing of the garden wall, bashed in and broken by marauding goats over the years that the property was empty, letting them tear at the trees with impunity. Last summer when I was hoping to purchase the property, since the owners were away in Athens I stopped up the gaps temporarily with anything I could find, from an old sink and rusty scaffolding to palm branches and timber, and stitching fences together using old bits of wire, all of which my neighbours Sotiris and Elpida laughed at since it wasn’t my responsibility. But there might not have been much garden left if I hadn’t done it.


It’s held up for six months, and as yet I haven’t planted much more than a tiny vegetable patch from seeds I had to hand, a flowering bush that I bought by mistake from a Cretan in a truck when I really only wanted potting soil, and an orange tree that I carried all the way from the hills of Rhodes, having bought it as a thank-you in return for some research, and which will be very lucky if it survives the salty windy off the sea. For now, I’m enjoying the abundance of poppies and other wildflowers, which the bees love, though Sotiris recommends I blast the whole thing with a farmako, chemical, in case of snakes. The fig trees have so far survived the flocks of hungry migrating birds. I’m sure the vines and the rest of the garden might start to appeal to goats again as the vegetation on the hillsides dries up over the coming summer months, and I don’t want to be invaded if I go away for a few days and take the guard-dog with me.


A few months back, a man who lives up the road offered his services in mending walls and fences, quoting a figure that seemed high but fair. But it was delayed first by his going away, then by my going away, then by my work and need to top up the bank account. And truth be told, I’ve been hesitant also because the walls that need repairing are beautiful old stone walls and I fancied having a go at restoring them without too much concrete. I’ve done a lot of staring at old walls as part of my new book project, and it would seem a terrible shame to spoil the original craftsmanship.


Besides, although figuring out what needs doing and how to get materials all seems overwhelming at times and it would be easier just to pay someone to deal with it, it’s in my character that I didn’t just want to hire someone to do the work for me; I wanted to learn about how to do it. I didn’t expect to become a master craftsman at dry-stone walls overnight, but I like to get my hands dirty. Having my own place gives me an opportunity to experiment and learn. 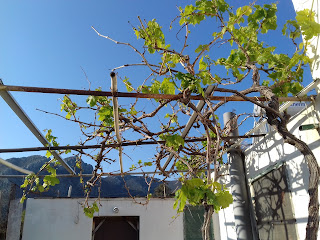 When I mentioned this to my Swedish neighbour Marita, who along with her husband is also a hands-on person who likes doing things in old-fashioned and eco-friendly ways, they were all for helping to rebuild a section of wall with minimal concrete. They even had a concrete mixer and could teach me how to make it. I managed to buy cement and I already had some sand, because the man who sold this place to me was a builder and never threw anything away. ‘If you’re not so religious you want to go to church,’ said Marita, ‘we’ll start on Monday.’


And so, on perhaps the hottest couple of days of the year so far, we started re-building a wall. We were rather glad none of our Greek neighbours were present to tell us what we were doing wrong. We spent a morning digging rocks out of the earth and hefting them up onto the wall. Marita and I chatted throughout, comparing Swedish and Old English, and noting that the bees are getting into holes in our houses and leaving piles of pollen. Her husband - who pretends not to speak English - took it upon himself to mend my hosepipe, making the evening watering much easier. Ian helped me to remove the debris that had been covering gaps in the rusty fence and got down on hands and knees to dig for more stones. Lisa, after some initial excitement, lay around in the shade, and occasionally inspected the wall for lizards. I thought about how in the old days, neighbours used to help one another to build what they needed, and I was profoundly grateful to have people nearby who still believed in that.


Sotiris came back from Rhodes and pronounced that our work looked all right. He spat now and then as he talked, but I don’t know whether he was deflecting the evil eye or just swallowed a fly. He told me again that I should cut down all the grass in the garden, adding that it might attract mice as well as snakes. But later another neighbour came by and agreed with me about keeping the poppies for now. She told me that when the plum trees in the garden were watered, Pantelis used to give away buckets of them to the neighbours. This garden has a history. And I have a bit of responsibility to look after those plum trees. 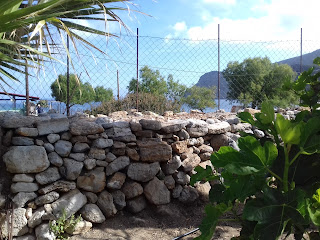 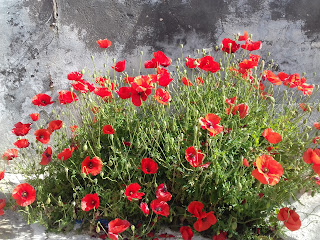 Email ThisBlogThis!Share to TwitterShare to FacebookShare to Pinterest
Labels: Tilos