Washed Up on Skafi Beach

We were leaving Skafi beach when Mum and I noticed lifejackets strewn on the pebbles. 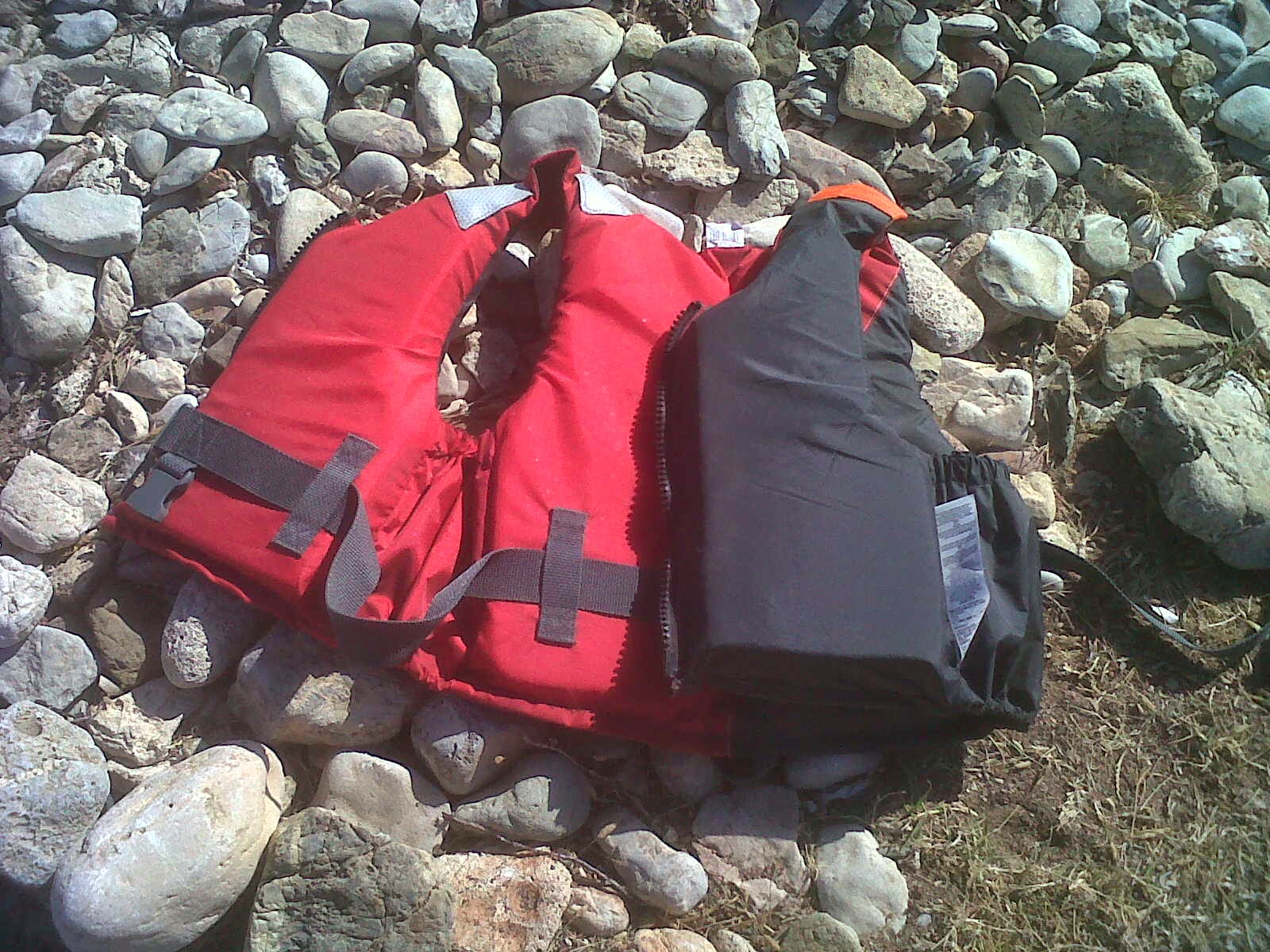 All sorts of things wash up on Skafi; visitors make shelters out of driftwood and artworks out of old shoes, and clothes are sometimes hung across the cave at the far end to scare the goats away when the farmer, Menelaus, doesn’t want them drinking seawater.
The lifejackets were odd, though. They seemed expensive and new, and I wondered if they’d inadvertently been lost from a charter yacht. This is the season for yachts to be mishandled by holidaymakers, and in fact during these days at the start of July, one was just about to enter the harbour at Livadia in an ill-advised way during a storm, and sink Nikos the fisherman’s little varka.
Closer inspection revealed the floatation devices were different sizes, including a few for small children. Alongside were items of clothing. Hours later we learned there’d been a new arrival of Syrian refugees, and I guessed they must have arrived at Skafi. 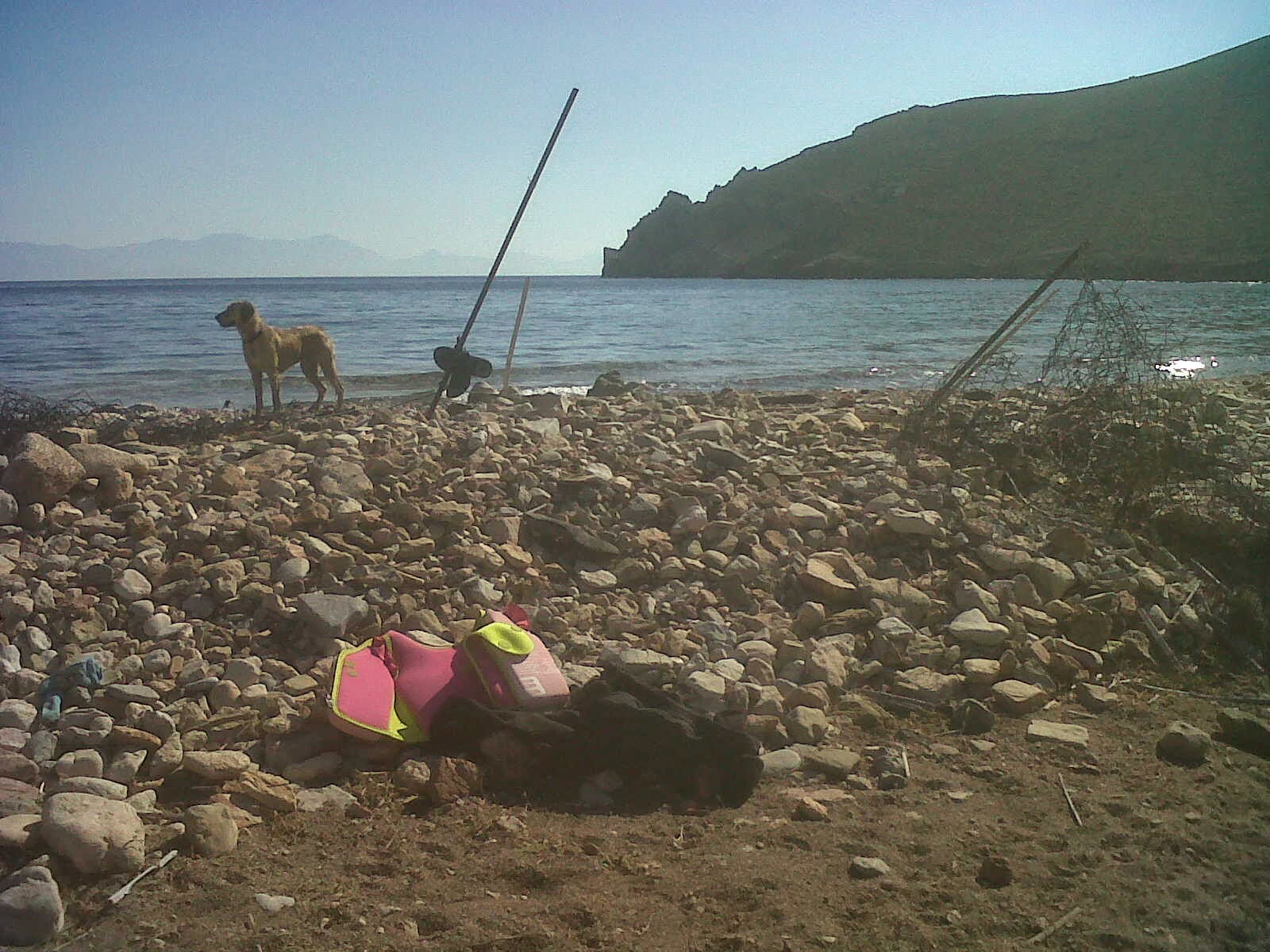 This month, Tilos became a dropping-off point of choice for people smugglers. Not for the first time, this fairly empty bit of rock with its deserted coves just a few miles from Turkey has become a convenient place to leave people who’ve paid to escape a war-torn country for a new life in Europe. 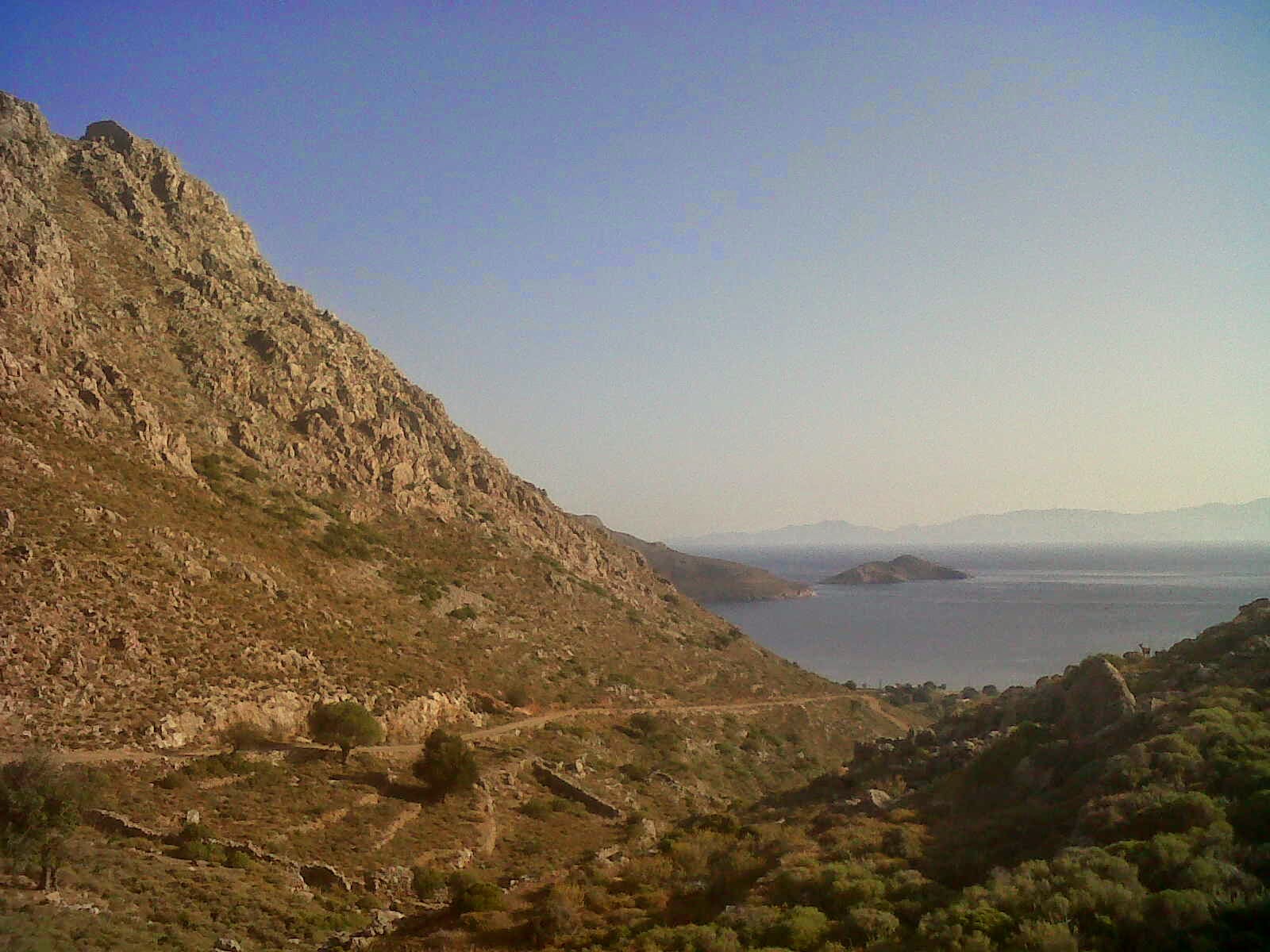 The next day, though it was very hot, Mum and I walked with Lisa to Politissa, the ‘monastery’ in the hills above Livadia that’s only used once a year for the celebration of the Holy Virgin in August, or for the occasional wedding. It’s recently become a useful spot to house the refugees, and their friendly faces lit up to see Lisa cooling off in some flowing water.
It encouraged us to walk up and say hello, which is how we met a young woman speaking excellent English who’d just a day earlier been washed ashore in an unknown land with her children. They’d arrived at Skafi in the dark of night, and been told the boat had a problem and they must get out at once, taking nothing with them. Several of the children – shy, wide-eyed, now gleefully stroking Lisa and clutching their toys – were very young, while over in the corner a smiling man held a baby only a few months old. It must have been terrifying as they jumped ashore on a wild beach surrounded by rugged hills, with no lights visible. They lit a fire, and in the morning they saw a path and the young men walked to see where it led.
For now, they were safe, although the mother found it hard to explain to her kids why they couldn’t go for a swim in that lovely blue sea down the valley (they’d been told, as their papers were processed, that they could go for a walk in the early evening). They could sleep in peace and make food and had been given clean clothes, and it was sad to think that these were probably the best days they’d have for a while, before they were shipped off to a holding centre somewhere. 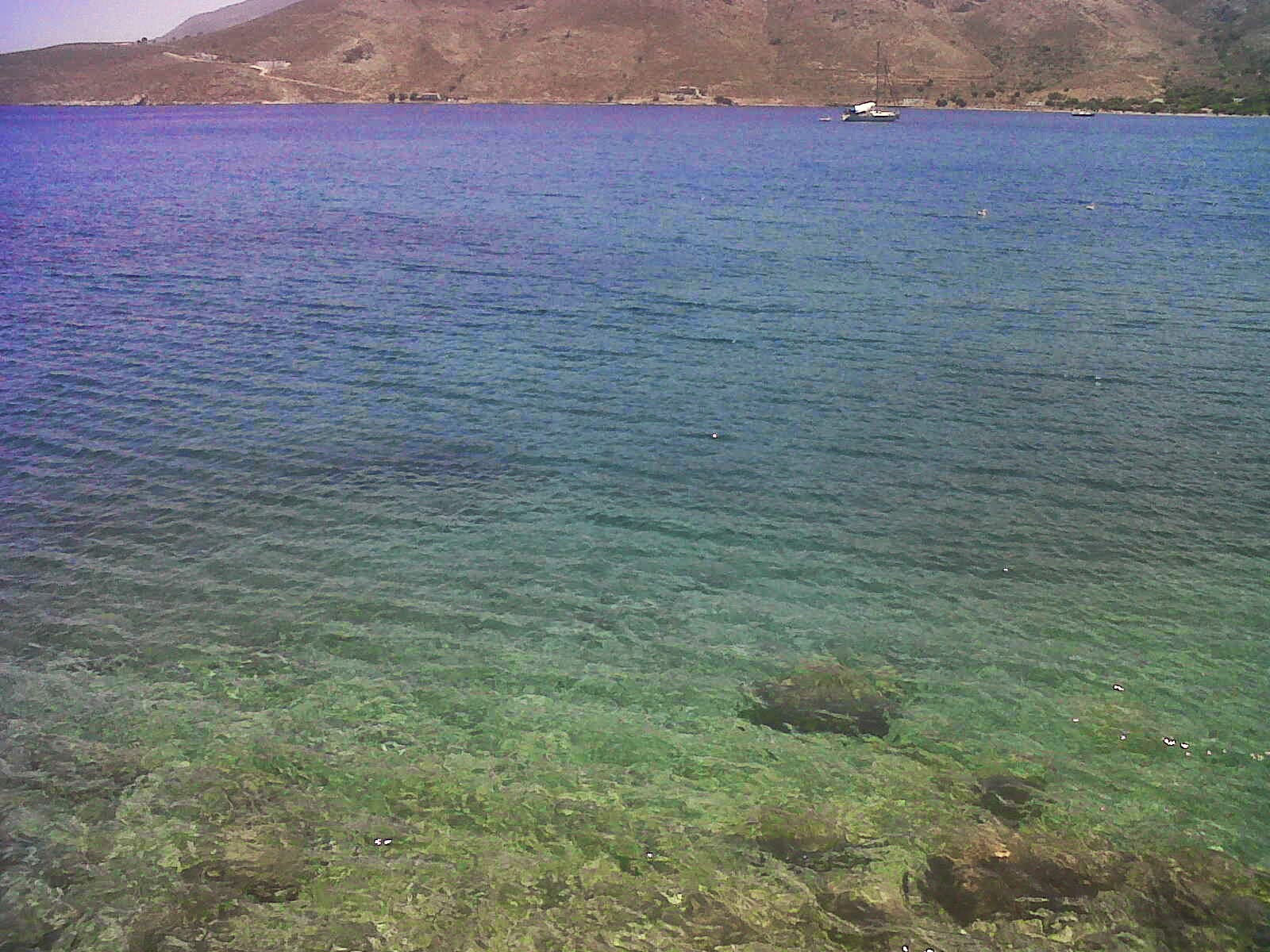 Later, we swam, feeling grateful, and when we drove back to Livadia in the evening we went back to Politissa. A young man greeted us cautiously and asked what we wanted. We showed him a picture book and some finger-puppets for the kids – perhaps something to keep them entertained on the long ferry journey to come. He smiled. ‘You have one more for me?’ Beema had taken the kids for a walk down to the sea, and he asked if we wanted to wait but we expected they’d be a while, and I had a dance class to go to. We danced outside the church, in the cool of the evening. 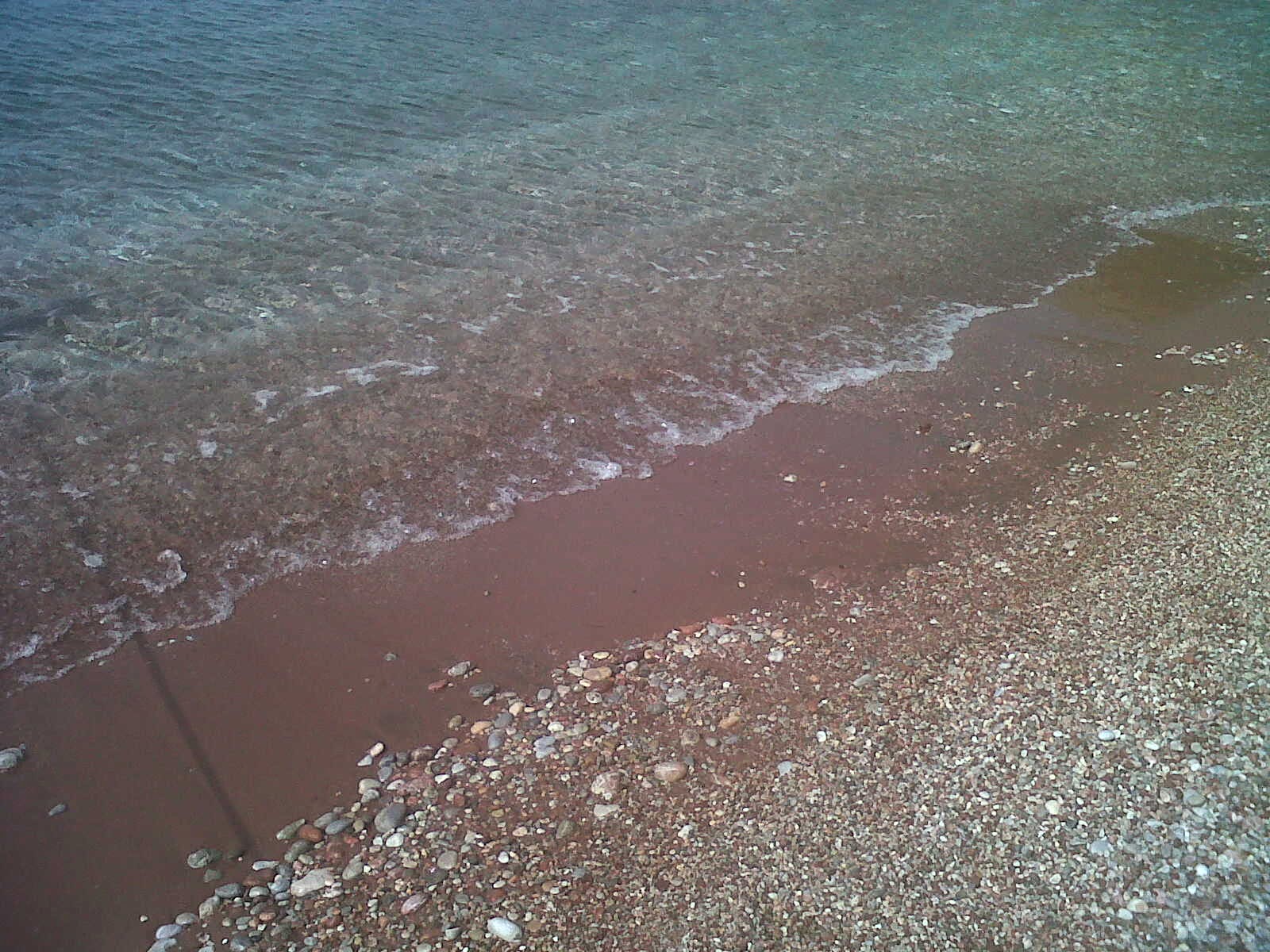 A few days later, Mum and I went back to Skafi one morning, watching eagles circling above; having awoken early to the sound of cicadas and crows and bees, and set out swiftly, we had the beach to ourselves at just after nine, and the water was a perfect topaz blue. 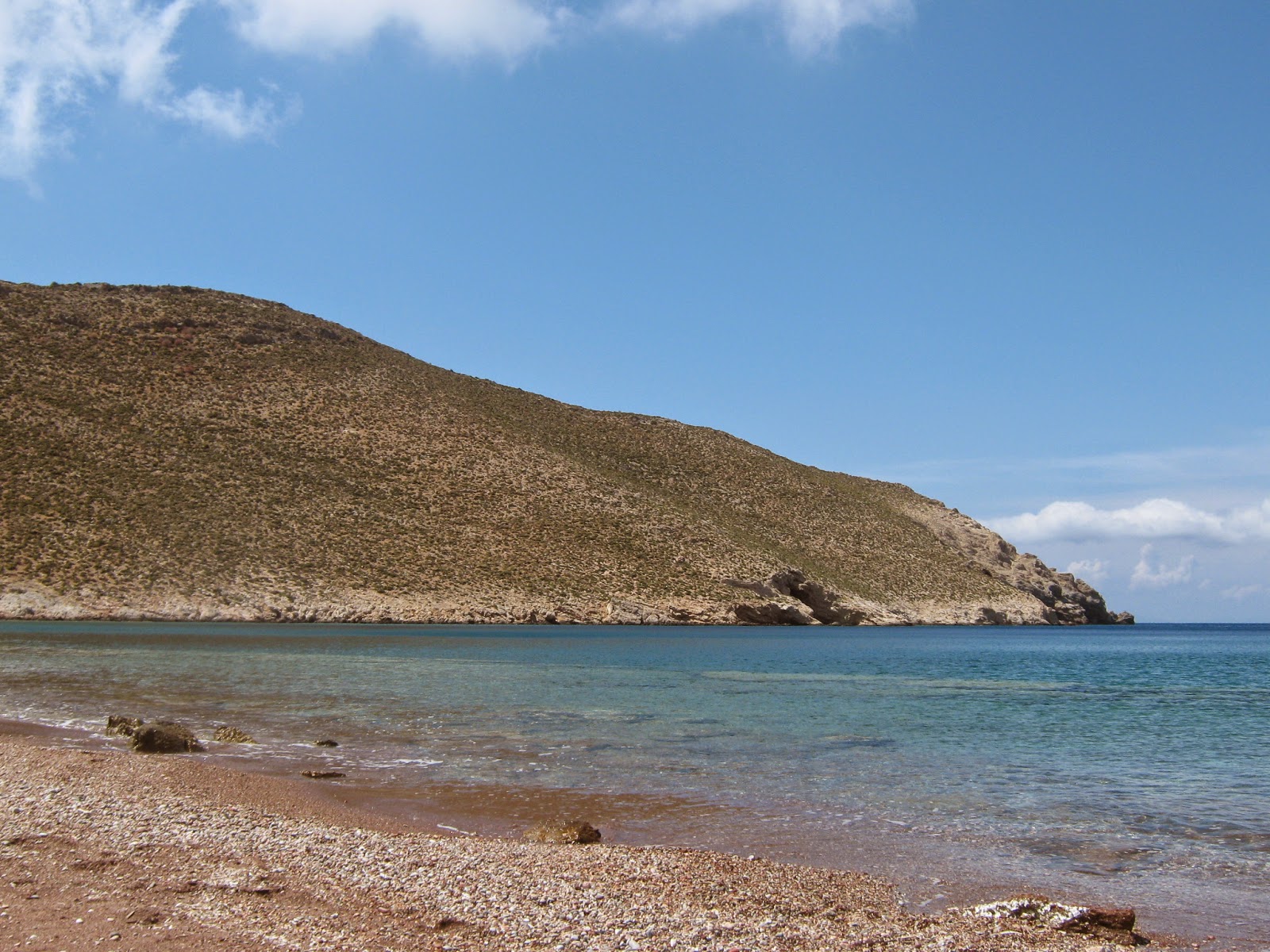 At first, the lifejackets seemed to have been removed, but Mum figured out that the windstorm might have blown them in to shore, and sure enough we found them all in the scrub bushes. Fearing they’d be scorched by the sun and left as rubbish, we gathered them up and carried them towards home. As we stood in the shade of a tree near Menelaus’ enclosure on the way back to the village, tourists passed us on their way down to the beach, and I laughed, realising we looked like we were selling our armfuls of lifejackets; perhaps we’d do better business down in Livadia...
As we neared Megalo Horio, we looked down into the valley and saw people at the little chapel of Ayia Paraskevi. Only later did we find out it was Anna Parliara, the Silversmith jewellery maker, along with her partner and son, celebrating her birthday by painting her chapel. 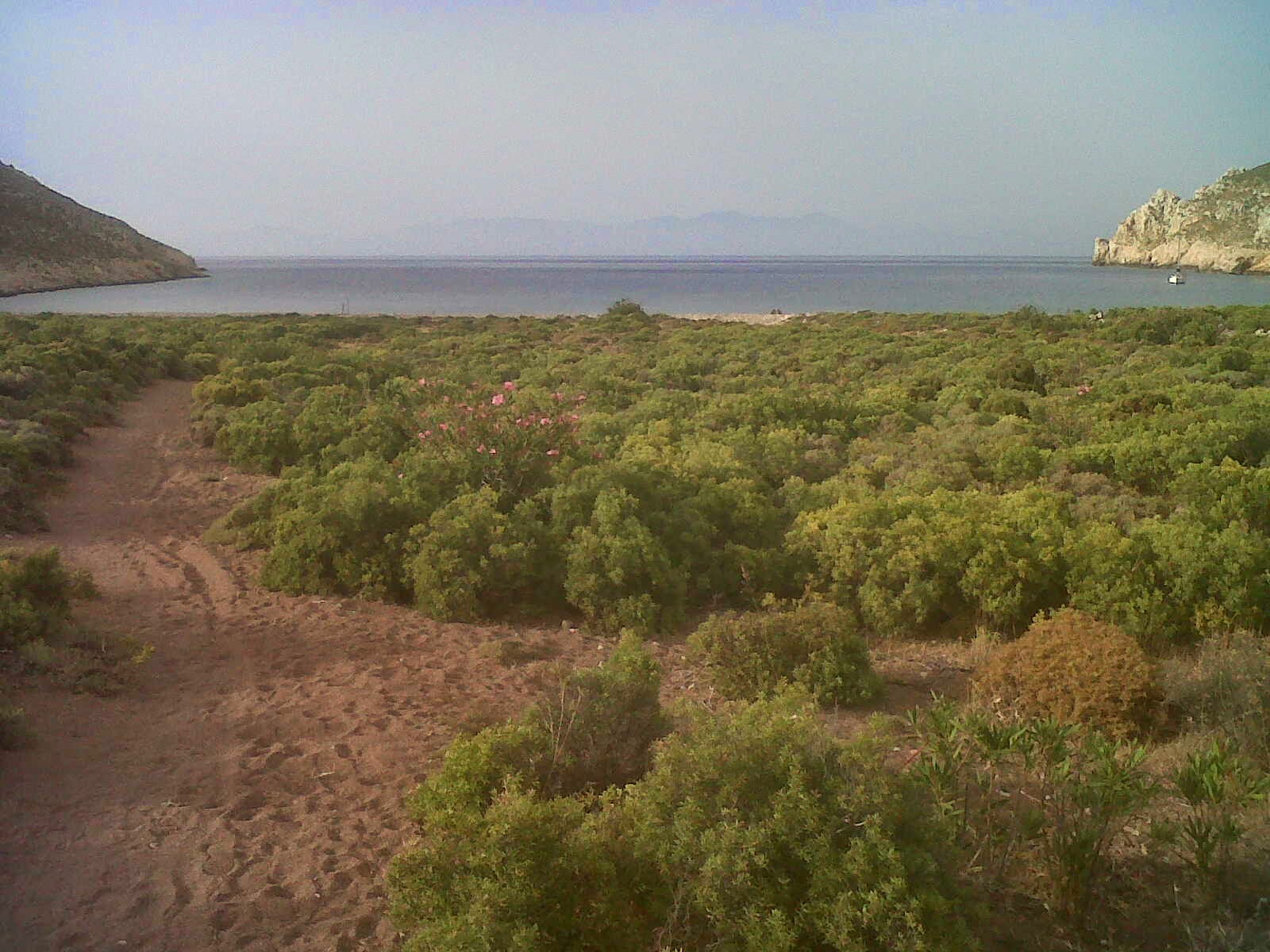 A couple of days after Mum left, I went back to Skafi on my own one day with Lisa. The weather had turned strangely grey with clouds, though the beach was still colourful with brick-red sand, and the bay empty except for a yacht.
I swam around with a mask and snorkel and watched the fish: the loners with the rough, chocolate-brown downward stripes and a flash of blue on the side, which hide in the shadow of rocks when they see you; skaros, purple-brown with big scales like armour, and comical yellow eyes that look up at you anxiously; and the tiny ones with the forked black tails and white bellies, curious and bold, that swim right up to you. 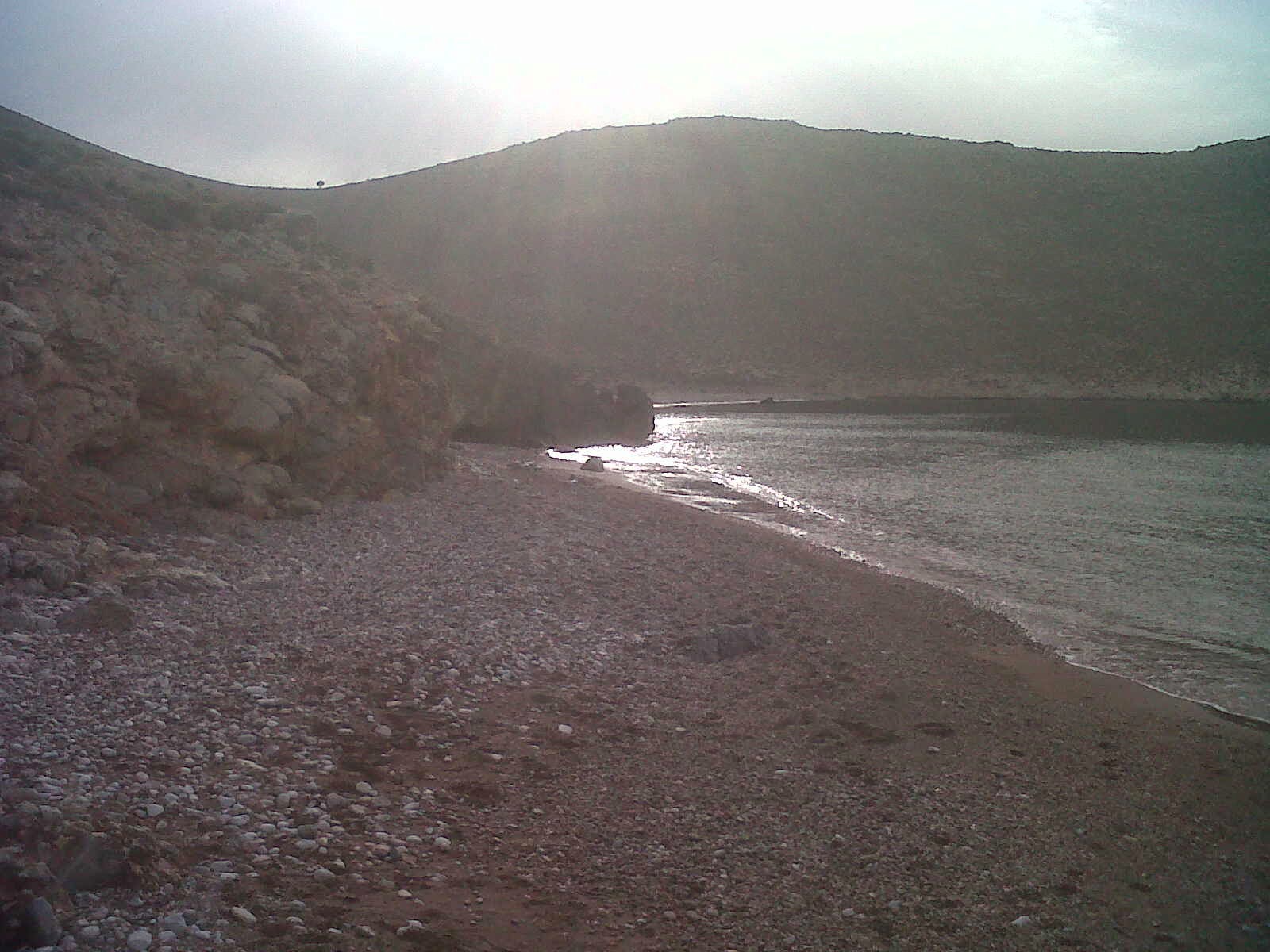 When I got out and lay on the beach, I felt something strange – tiny drops of rain, just a few, lovely in the soft, warm afternoon air. On the walk back home, I saw a green-blue roller fly across the valley as I reached the top of the hill. And I noticed more lifejackets, and empty water bottles, and wondered if there had been more refugees.
It was true. Back in the village, Marios told me proudly that he was up all the night before. He’d been working on his car (as always) when he heard a voice in the dark, ‘My friend, I want water.’ He ended up walking up from Skafi with that group, helping them find their way. ‘I like Syrians. Is good people.’
Later, I was taking Lisa out for her final walk of the evening around midnight, when I saw Maria whispering over the wall to Marios.
‘More refugees!’ she said. ‘Kristoforos call me. They arrive now at Skafi.’ The two policemen had gone to Menelaus’ enclosure to try to find them. We joked that Tilos would become Syrian at this rate – after all, there are only 300 residents of Tilos, and if the Syrians keep coming every few days… ‘We give them Mikro Horio,’ joked Marios, referring to the abandoned village. Suddenly, we heard voices. ‘What’s that?’ But it was just the sound of a private party in the village. 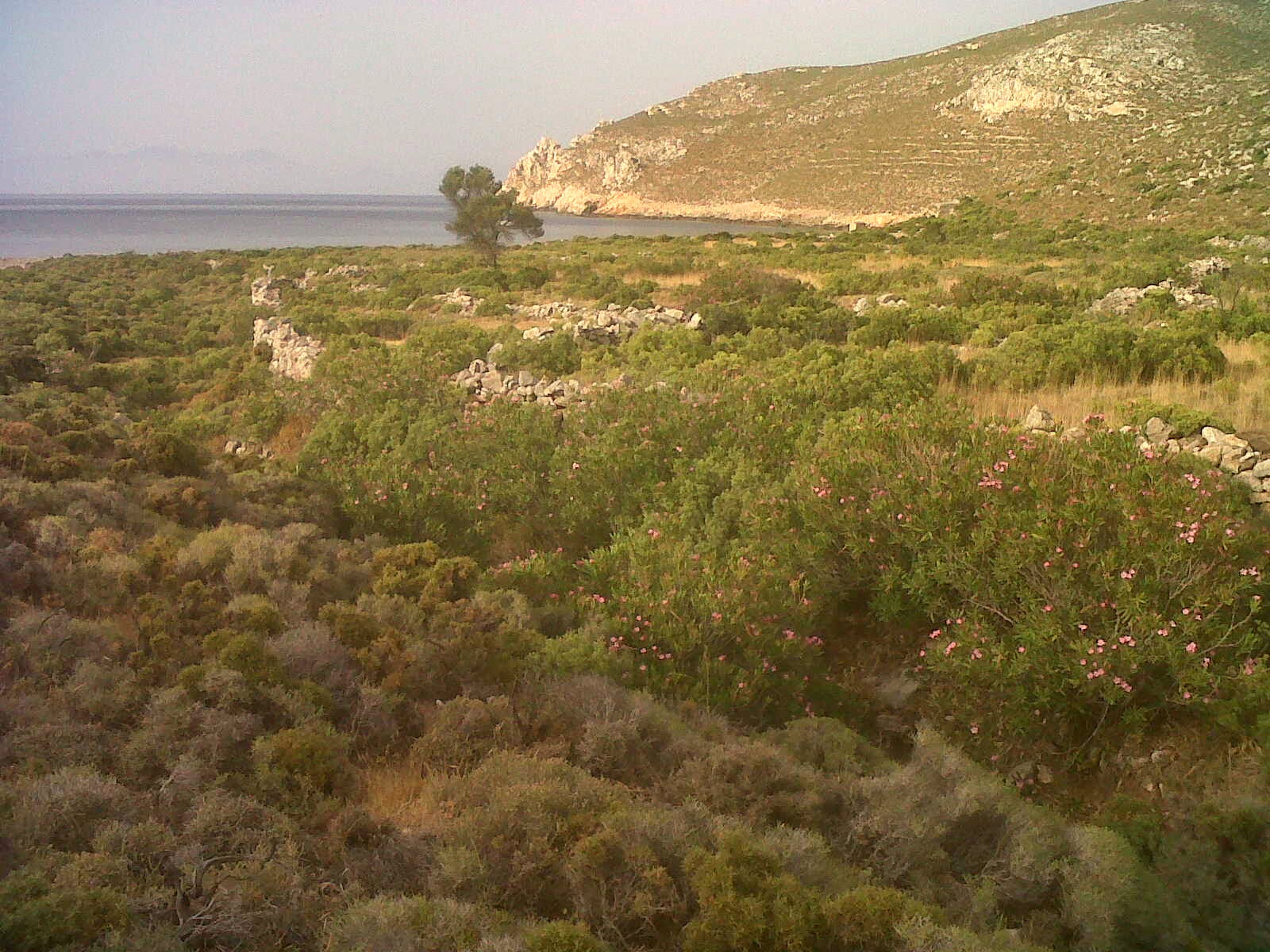