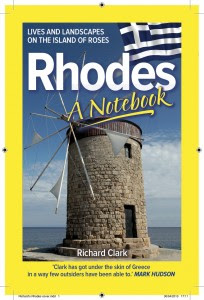 Countless times I’ve wandered past the casino in Rhodes and the Turkish cemetery, without knowing Lawrence Durrell’s associations with what was once the British administrative headquarters after liberation of the island in 1945. Nor did I know that Rhodes new town was created when the Turks expelled the Greeks from the Palia Poli in 1309 – no wonder the locals prefer the new town.

RHODES: A NOTEBOOK is the latest in a series by Richard Clark, and is a real pleasure to dip into. Combining a travelogue on a sailing trip around Rhodes and nearby Symi with general essays on Greek history, language and culture, it provides rich insights into the well known and lesser known places of the island.

There’s a poignant note about the Valley of Butterflies, or Petaloudes, and he’s made me determined to get to Monolithos this winter. I think travellers en route to or from Tilos might find overnight stops in Rhodes less painful with this book in hand (or loaded onto the e-reader). 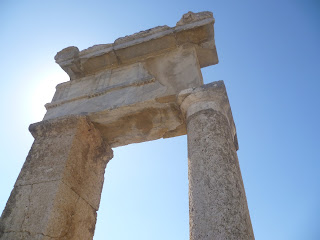 If you’ve read CRETE: A NOTEBOOK, then you’ll find some material is repeated here (understandably, as the book is aimed at different readers) but for someone like me with a mind like a sieve, it provided useful reminders. And I gleaned a lot from the notes on Greek culture. I loved this, which I hope he won’t mind my quoting here, showing that Greek rejection of authority applies even when riding a motorbike:

‘It is interesting that the main reason for not wearing crash helmets is not the heat or even a casual disregard for road safety… The real reason is that it is compulsory to wear one.’

Conclusion: well worth a read – and don’t miss the Crete book too. Clark lived in Crete and has travelled all over the island, and the book made me long to see some of the places he describes so lovingly.

When forced to leave Kosovo, the place she had fallen in love with, and return to England, Elizabeth Gowing became more than a little obsessed with the figure of Edith Durham, an Edwardian writer who had travelled in the region a hundred years earlier. Finding parallels with her own story in Edith's, Elizabeth found herself on the trail of this fascinating and brave character who needed only her tam o'shanter to shield her from the sun on treks through Albania's Accursed Mountains.

Elizabeth's journey to get to know her Edwardian counterpart is a journey through museum archives and letters, hunting for clues in libraries and catalogues, as much as through places ('Turn right at Mozart,' says a curator, and she wonders if this is how directions are given in heaven). It is woven with an extraordinary level of fine detail, like the embroidery on a pair of traditional Albanian slippers or a piece of silver filigree, craftmanship that she marvels at along the way.

The result is a quirky mix of biography, travel and history; it begins gleeful and humorous, and as she wanders the inner chambers of the gloriously bizarre Pitt Rivers Museum in Oxford, places where you might find an Inuit suit made of seal intestine, looking for a wolf’s tooth amulet, I read slowly, savouring every moment. As she gets deeper into the topic it starts to have a whiff of academic obsession, circling back on passages she remembered before, meandering through notes and asides on the workings of modern Kosovo, I wondered whether Elizabeth was lost forever in her obsession. Thankfully, she comes to the end of her search with an understanding of her own way forward.