Still working too hard, but barefoot, to the sound of crickets. Eating decadently delicious papaya for breakfast again, thanks to Pavlos. It’s been so long since I wrote, but I have been gathering plenty of stories which may gradually make it here… 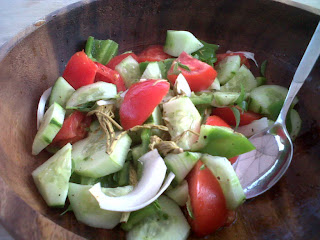 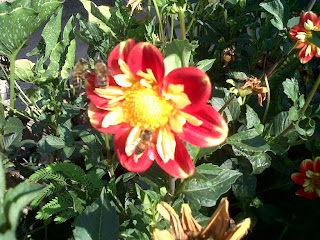 Zesti, zesti! 'Hot, hot!' The local commentary on the weather at the moment can safely be filed under ‘stating the bleeding obvious’. Yes, it’s hot, somewhere between early thirties and forty most days. But then last time I checked, we were on a rock in the Mediterranean, and it was nearly mid-July. Hence the constant sound of bees and crickets. Hence the smell of sage burning to a crisp in the sunlight at the side of the path… And the smell of figs ripening on the tree by Menelaos’ farm, on the way down to Skafi after I finish my work…
Ah, Skafi. There are two couples on the beach when I arrive, but by around five they’re gone and I have it to myself, except for a few goats. There are biting flies but they seem to go too as the heat calms down. In and out of the water to cool off, I’m feeling stronger after a tiring day at the desk, and let myself fall asleep for a bit…
Some tourists have left a beer can and the peel of a watermelon. You carried a watermelon all the way down here but thought you’d leave the peel? On this perfect piece of pink sand, with nothing around? At least the goats will eat it…
Walking back towards seven when the sun is behind the hill, feeling completely chilled out after the rest and exercise, carrying some bits of wood and bamboo cane for my garden, I watch what looks like an eagle but is probably a buzzard, circling overhead.
* 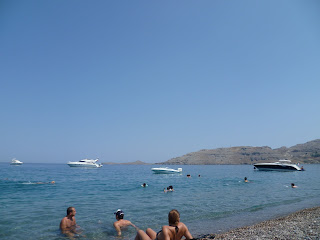 It was very hot in Rhodes on Sunday. Hari, driving us to Kalathos, put his hand out the window and declared it was burning. He picked up coffees for the road, handed me the sandwiches he had made with smoked salmon and salad, a frozen bottle of water for the beach. He knows the road very well and drives with purpose: to overtake. After the monastery, as we descended towards the beautiful plain of Malona, a goat ran out right in front of us but he braked: ‘Reflexes!’, he said, smiling after a few moments, breathing again, shaking his head. When we got to the beach, the sand was already like hot coals, and Hari stood in the sea and declared: I’m not getting out. We stayed all afternoon in the sun. When I got back to Tilos next day and saw Vangelis I said, ‘I think my face is a bit red’ and he said, ochi ligo, poli! - ‘Not a bit - very!’
But it soon turns to brown... On the weekend before I went away to England, I’d just returned on the bus from seeing a friend in Haraki, and needed to go back to the hotel to try to sleep a little before the evening, but I noticed some nice shoes in the window of a sports shop and decided to go inside. OK, I know… but I have a pair that are falling apart, so… The walking shoes were too expensive at 90 euros but there were some lovely flip-flops with sparkly bits for only 20 and I was wondering how I could justify them, when one of the men in the shop who had been talking amongst themselves asked me:
‘Eisai Italitha? From Italy?’
I smiled. I love being asked if I’m Italian. I said in Greek no, I’m from England.
‘What? No! Impossible! Father Greek? Mother Greek?’
‘No, both English! But thank you. I walk a lot. I live on an island.’
‘Which island?’
‘Tilos.’
General hilarity. ‘What?! You can’t live on Tilos! You’ll go crazy! No re, it’s just it’s very small. Katse re’ – brings out a chair – sit down, sit down, ‘it’s a family shop, this!’
It turned out they knew quite a few people from Tilos – his wife’s family used to live in the house where the pizzeria is now.
When I arrived in England, it was very green and flat and a little strange, and on the first morning, I caught myself looking at photos of Tilos and Rodos. I got drenched a couple of times over there, having forgotten to take an umbrella, the weather turning from warm to rainstorms so fast.
But the week back in England was extraordinary in the end. A week of people telling me I look well, seem well, how much positive energy is coming off me - but also some intense and enlightening talks with friends: when you know you won’t see someone for a few months, you make the most of your time with them. It gave me much food for thought.
* 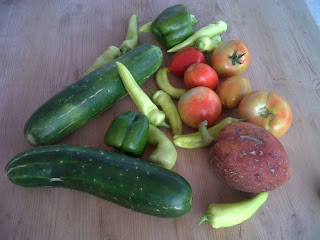 And talking of food…
I came home to see my wooden table laden with fresh vegetables and fruit again - cucumbers, peppers, tomatoes, papaya… Yesterday there were more when I returned from Skafi, and just now Pavlos turned up on his michanaki with a handful of dark plums. I've just eaten two and they are firm, just as I like them. ‘I’d have brought more,’ he said, ‘but I didn’t have a bag with me.’ Now he’s gone down to the bottom of the garden, I can hear him breaking up soil.
In the week or so I was away, my own garden has come along beautifully. There are lovely little courgettes – I just hope I can get them before the rabbit does, but anyway the flowers are pretty and the butterflies like them. And there are lots of tomatoes, a couple already turning red. The mystery vegetables are still growing strong, although Pavlos says they're not good. And the melon seeds I planted one day after eating melon in the garden and thinking ‘why throw the seeds away?’ have all seeded and will have to be thinned out. Must try that trick again. I picked some rocket for my salad yesterday,  very spicy, and used lots of basil. You hardly need any oil, as it tastes so great, just a squeeze of lemon and fresh ground pepper. OK, I was a bit put off seeing ants floating like herbs in my olive oil… The olive oil now lives in the fridge.
The ants are poised to take over the house if only I would let them. If I spray to kill flies, the ants are there soon, the undertakers of the insect world, ready to carry off any dead thing. 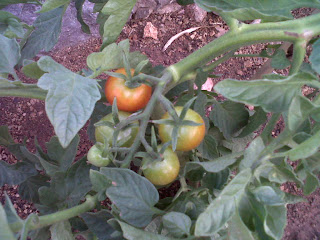 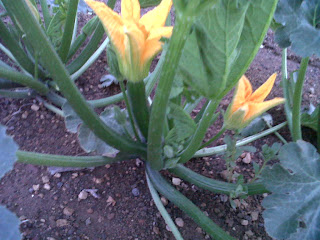 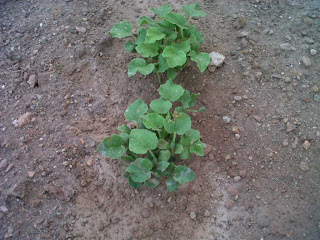 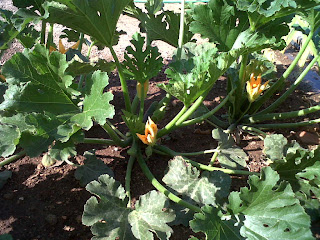 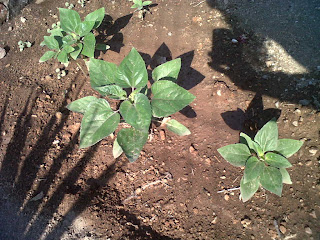 It’s so hot these days, the sun heats the house over the course of the afternoon, so last night I slept outside, under an almost-full moon that was so bright it lit the sky. The breeze was so warm I barely wanted a sheet over me. ‘Be careful of scorpions!’ said Hari when he called to invite me over to Rodos for the weekend.